A good run around the resevoir and we set of to collect Oscar.  He is indeed a handsome beastie, but somewhat scarred and very scabby from his most recent hammer and tongs fight with the other dog in the house last Saturday.  Apparently the battles commenced as soon as Oscar hit two years old and his testosterone started raging!  He has sores on his snout as well from where he was muzzled.  So he came from a loving home, but needed to be in a single dog household.  Another bonus … he’s used to travelling in a motorhome as the previous owner showed all her dogs.  Win win!

We could have descended on my ever accommodating parents, but as we spend most of our time living in Chardonnay, we felt it wisest to book onto a caravan Club CL so we could be still and get Oscar used to us and being in the ‘van.  I’d booked 13 nights at Coxbridge Farm, caravan Club CL  in Farnham, which is:

I was delighted to find that my old very pragmatic vet (Sarah who’d ‘vetted’ my previous 3 dogs … and put two of them down!) was still in Aldershot – appointment booked 🙂

We’ve walked a lot and soon discovered that we can let Oscar off the lead … he does not stray far.  We are working on his recall, and unsurprisingly he can be a bit deaf, so we are careful where we let him off.  Strangely he has been discouraged from swimming … a Springer not like water … unheard off!  We are sort of encouraging him in, but on second thoughts could this be another Oscar bonus as do we really want a wet dog in our motorhome?!?  Training is going well as he is seriously greedy. 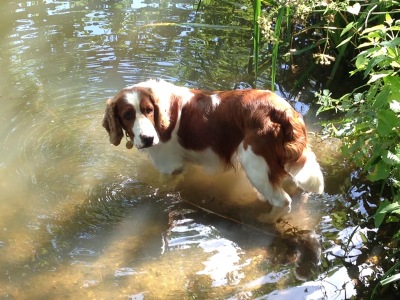 Not sure about this wet stuff!

The vet suggested we delay his series of jabs (normal jabs & booster as the previous owner did not believe in them, rabies for the pet passport and kennel cough as we don’t know the dogs he will be meeting) … a series of 4 appointments, each about 2 weeks apart.  Ho hum … we’ll have to put back our departure to France to the start of October.  Fortunately we are not inconveniencing Kay and Stephen who were going to travel out with their two collies with us, as their Taz is lame and needs to be kept quiet.

We’ve also been catching up with a lot of friends and I’ve been able to see a lot of Maddy and the Aged P’s.  Maddy made the mistake of running at Oscar so he’s now nervous of her.  The Aged P’s are very dog friendly – they’ve dog sat all my previous Springers – numerous times.  For some reason Oscar is terrified of Dad and avoids Mum … can only think it is because we’ve been at their house a lot and he thinks we may leave him there.  Dad blowing raspberries at him may not have helped!!!

It feels like Oscar been part of our lives for ever already.  We are tripping over him a bit in the van, but his bead is under the table and we are training him to respond to “in yer bed” when we move around.  We also lifted the carpets, which to be fair were pretty stained and these have gone to that free and large repository, called the Aged P’s attic!

A great decision to ring the Welshie rescue organiser … we’ve landed a gem.

We took the van to Southampton Fiat Professional to check out the diesel particulate filter and loss of power … all good, but the sensor is faulty … a known Ducato issue, but the part is in back order … at least we know we’re fine to drive Chardonnay.  We also managed to get a slot in Viscount Motorhomes in Southampton to look at our on board water leak.  It turns out the overflow pipe had come out of the tank … £20 cash for a 10 min turn around and what he hopes will be a permanent heath robinson fix.