We filled our water containers and emptied the toilet in the very convenient public toilets and wandered up the road the the regular Saturday local market int he village hall.  A bit of knitting, some local slate products, a stall of local fruit and veg and a lot of cakes.  I picked up red onions and a lettuce … J picked up a carrot cake!  The healthy and unhealthy!  But we will share :).

J was keen to watch the Donegal and West Meath GAA Gaelic Football  All Ireland quarter final, so we were looking for a pub.  We headed into Dungloe, which had its Mary of Dungloe festival – they select a local lass to be the Mary (a bit of a beauty pageant) and lots of bands in bars.  Limited parking, so we ended up adjacent to the fun fair … concerned that we might get a bit stuck there come 2.00 p.m. when the fair opened.  A quick wander into the town and then, it not grabbing us, we left and headed for the hills.

We had a pub in mind, but the small village was host to a cycling event so the pub wasn’t showing the football.  We did drive along the finish line with crowds either side of us … slightly embarrassed to be there, but tempted to give a few royal bows and waves, we extracted ourselves.  We continued into the Glenveagh National Park – some stark hills making the scenery interesting – at the visitor centre I was told about The Lagoon, back out of the Park, but it would definitely be showing the game.  So back we went.  A large pub with a lounge and local’s snug; we went into the snug.  Since the barman said we could park overnight in the car park, we forced down a couple of ciders.  Back to the van for a J nanny nap and then back into the pub for supper.  Very traditional pub menu – so much deep fat fried that one set of foreign tourists arrived, read the menu and left. However, the fish and chips and spicy deep fried chicken fillets were all well cooked.  An elderly couple had a quick chat … in very strong local accents … he was 80+ and had missed the game as he had been at work – labouring!!  A couple of bottles of the quaffable single choice of red wine (i.e. no choice at all … red or white) and we slept really well!

We thanked the pub and I asked where I could find a post box in the neighbouring shop, which sold everything from ice creams to grass seed and tins of beans to fertiliser.  Post box a few miles up the road, but the shop owner offered to post my postcards with his post tomorrow … nice people in this neck of the woods.

Back into Glenveagh National Park and we parked by the already full car park by Mount Eribol.  On paper, it does not sound like a difficult climb – being only 751 m high and the 76th tallest in Ireland.  Erigol the Terigol gets its name due the the initial clamber across and in muddy wet bog.  The steep ascent is then over scree to the top – some hands and knees.  Nearing the top, the heavens opened and the mists descended so we could only see about 2ft in front.  Fortunately, we’d seen some of the views of the other peaks and the coast on the way up.  I was relieved to have my walking poles for the descent, supporting my dodgy knee and giving me some balance as we slid down the screes … J went down 3 times, and we watched a couple where he went down, then she did, and then they did synchronised bog diving!  A ‘cool’ mum was making her 9th climb up Erigol and her young son’s 5th.  Another chap at the summit, had climbed the highest peak in 30 of the 32 Provinces of all of Ireland in 2.5 years. 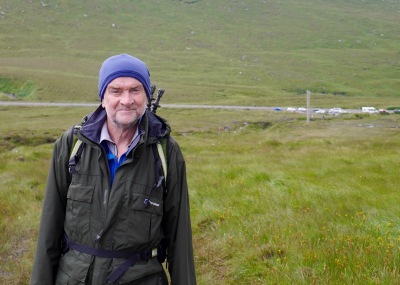 The on road car parking got busier every time we looked back … this is definitely on the way up as my poles are in the back pack and J does not yet have a soggy bottom!

It might not look much, but it was possibly the steepest climb we’ve ever done.

Some of the views before the rain and mist came in.

You can just make out the coast. 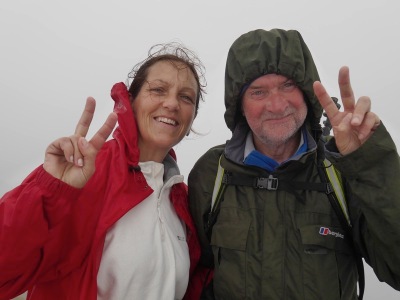 When we got back to the van and changed, we had a slight issue with Chardonnay.  She sort of started and then fizzled … no power at all though.  OK, so we have European motor insurance.  Oops – no phone signal.  J got a lift down towards the next town where he could ring the insurers and then a local garage rang him back – about an hour and half before they could attend to us.  J then had to walk the 2 miles back up the road to me, as I’d stayed in Chard … no-one hitches or picks up hitchers now :(.  A chap arrived from the garage where J had rung from … doing a favour for a mate further away.  He got us going – I had to drive in second gear, revving at 3000 rpm back down to his garage in order to clear the diesel particulate filter.  A common problem with these Fiat Duacto motorhomes … they engines are designed for white van man gunning the engine, which clears the filter.  We’d been nursing the engine for improved fuel consumption and only been doing easy slow short hops.  We now know that we need to regularly do 30 mins + where we get the engine hot.

We drove a short distance back to the coast to near Rinnageeragh and found a fabulous car park amongst the dunes over looking another white sandy beach … oh yay!  A quick walk on it and we read the plaque about 4 young girls having be drowned here in ’72.  A local confirmed that the beach here is treacherous due the the undertow, but that it was a good walk along the coast to several small bays and a long sandy beach … these were OK for swimming.  That’s tomorrow’s plan then! 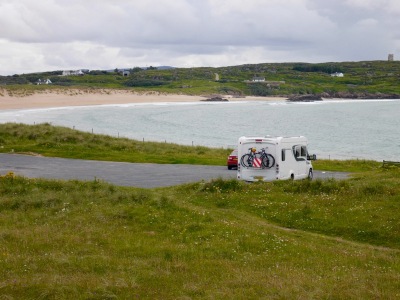 Having slow start, as we planned to stay a second night, I did pilates amongst the dunes.  We walked along coast trying to identify the little used path, which was quite fun, passing lovely white sand bays and beaches.  We made is as far as the Carrickfinn Beach, busy with life guards.  It got even busier when about a thousand teenagers arrived from one of the summer Gaelic language schools with their tannoy!  We wandered back the way we’d come, stopping at one of the bays for some still cool beers and a swim (minus wetsuit) for K.

A bit of a clamber up from the beach to get around the headland. 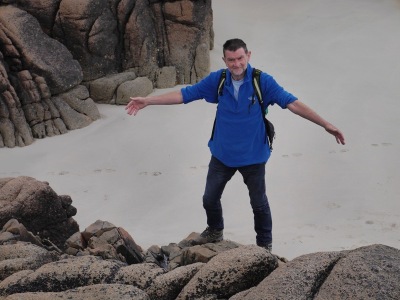 Mountain Goat – made it! 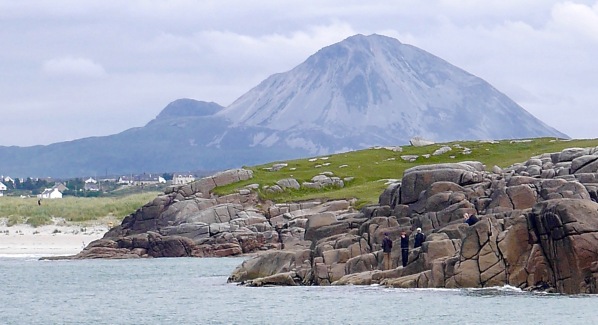 Mount Erigol in the background – looking pretty tame, but we know better!

I’d previously checked with a life guard – it is allowed to have BBQs on the beaches … so that’s what we did.  We carried down the BBQ, table and chairs, as well as all the necessary.  A fab location and one of those memorable events.  It became even more memorable when I took a call from the London and Surrey Welsh Springer Rescue organiser.  We’d discounted having a dog as it would be inconvenient, expensive and would limit what we could do and where we could go.  But we’ve seen a LOT of motorhomers with their faithful hounds, some really quite large dogs in not so large vans.  It felt like a gap in our lives.  So I’d just picked up the phone and rung the rescue organiser before I could rationalise against doing so – only about 3 days ago.  The conversation had gone along the lines:  There is a massive waiting list for them.

This call was to say that there was a 2.5 year old dog in Solihull – could we pick him up from there?  Of course!  The West Mids organiser would ring us tomorrow morning!  Somehow the Tcall had ticked all the boxes and `i’d pretty much gone to the top of the UK waiting list!

We opened another bottle by way of celebration and stuck a fire log on.  What a simply fabulous day!

Several phone calls later … we’d changed our return crossing from Belfast to Cairryan to …. tomorrow.  Whilst the current owner would have kept Oscar until the 18th, when we would’ve picked him up, she had two male dogs who’d were going at each other hammer and tongs and we just wanted to get him!  We packed up and flitted across to Belfast.  We will just have to come back to this part of Ireland to finish off the coast next year.  I put our Stendhal Festival music tickets up for first come first serve on the Motorhome Craic forum and even managed to get them posted that night.  We overnighted at a free motorhome aire in Bentra Grill, as the Carrickfergus service point was faulty.  A really quiet night too.

Up with the lark for a 7.30 crossing.  Nothing to report other than we drove all day and made it to a great free parking by a reservoir near Solihull – dog pick up destination!