Not a lot to report, other than we heard that some friends were in the area, so we met up with them for a meal on Saturday and a coffee on Sunday.  As you can image, it was pretty boozy, and fortunately Oscar was allowed in their hotel bar and restaurant, the staff having taken a bit of a shine to him.

We’d started to plan (well, think about) moving all our stuff into the new motorhome, so we’d booked a few nights at Coxbridge Farm near Farnham.  This is near my Aged P’s house, or more precisely, their attic!  They weren’t in residence again … being on holiday!  We sorted a LOAD of stuff that we really did not need and shifted it in … we tidied up the attic a little so it does not look like we’ve added to it  … much!

J had booked a dental checkup so we drove across one of the Bridges he used to run (he still dreams about work sometimes.  I was less concerned about part of the latest dream where a woman took his desk wearing a pin stripe suit, and more concerned about the other colleague who wore nothing but a pair of red knickers!!!).  J’s pearly whites had a check up and polish … by a female Dentist (no idea as to the colour of her knickers!), I took Oscar for a walk … and came back laden with large storage boxes.  Fortunately someone took pity on me carrying this large and heavy load and being simultaneously towed by Oscar and took the boxes for the last leg .. they refused to be hauled along by Oscar! 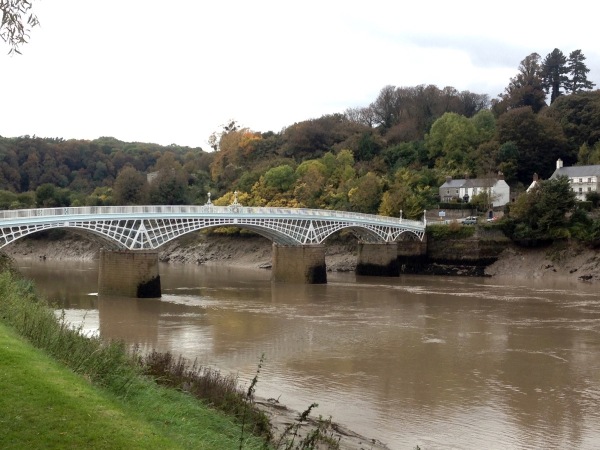 We put just about everything into bags to lift easily into the new van or into the large storage boxes to go in the garage.  We were not sure how much storage space Jez has compared to Chardonnay … but most of it is in the garage and we have just about filled every spare inch in Chard over the 4.5 years we’ve had her.  Will it all fit? 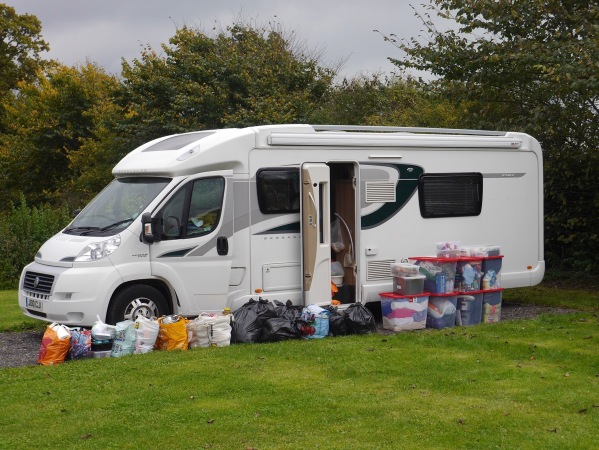 Don’t quite know what the other people on the site thought was going on … lots more still inside!

J had a brainwave.  He rang the motorhome dealer and asked it we could gain access to the garage towards the end of the day, so we could load up the boxes, twin tub, BBQs etc.  We had a bit of a wait whilst the cleaning was finished off … but it did mean I should have been able to sleep.  I’d been having the odd ‘unsettled’ night worrying about where AND IF all our stuff would go in.   We filled the garage .. a few inches to spare.  really lovely to have a good poke over our new home.  Then Stephen and Kay fed us … I was just delighted not to have to cook as a tad weary, but S is an amazing cook and always gets St Agur in for me …. my fav.  Don’t know if it was the wine, cheese or excitement, but I snored and was then awake from 2.00 … head spinning despite the garage being loaded.

We arrived before the dealer opened … all keen and eager.  The hand over complete we spent another couple of hours trying to stuff our belongings into unfamiliar places … I moved houses 5 times in 5 years at one point, so became a past master, but this was different.  We had to get on the road to meet Maddy in Canterbury – her father was driving her home for the weekend at 6.00, if not before.  We ended up just throwing bags and kit on the bed and the the floor.  We couldn’t tell if the rattles were the van or our stuff.

Stephen and Kay came to have a look at Jez at the dealer and brought a soft dog crate for us.  I’d been trying to buy one from shops as we were too short of time to have one delivered … Thank you.

We met up with Maddy for all of 30 mins at Cobham services as we travelled in opposite directions … at least I got a squidge with her, as I shan’t see her now until December.  The most excellent Canterbury aire was our overnight stop.  For tomorrow we cross to France … only a month and a half later than originally envisaged … a new dog and motorhome having delayed us … but worth it. 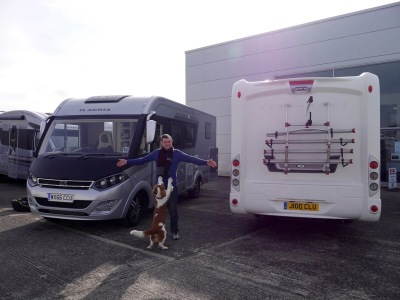 The old and new … Chard served us well. 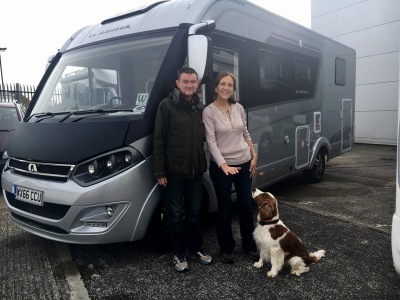 The proud new owners.  TY Kay for the pic. 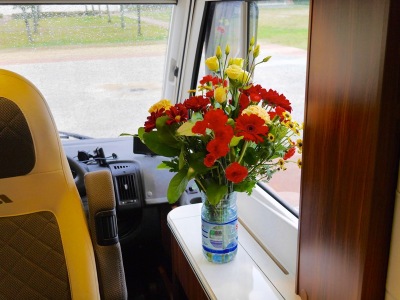 Flowers from the dealer, along with a lovely bottle of Fizz.  Improvised vase … I was a Girl Guide until I was chucked out! 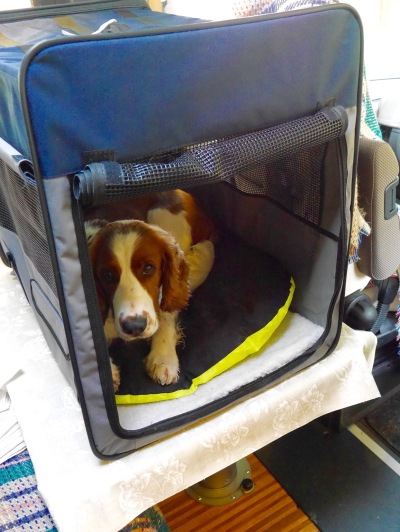 Kay, this one’s for you … so J can get outside at night to water the trees, we lower the table and Oscar hops up into his new bed.  He took to it really quickly, although we’ve not shut him in it at this point.

For the Motorhomers amongst you, or those just interested …. reflections of our Adrian Sonic Supreme I 170 SBC

It’s in Danish, but this YouTube the same model as Jez…