We don’t really do early starts, but don’t seem to find it hard to get up when setting off on the next adventure.  Our train was booked for 9.50 from Folkestone and it was our first time across with Oscar… They don’t care at all what animals you take out of GB … didn’t even check he was on board.  The train was late, but the trip passed really fast, as we have a large comfy bed and make use of it on most crossings … ZZZ.

We’d decided to ignore the Peage as I’d costed it at somewhere around EUR75 and the time difference was only 1.5 hours all the way down to the Pyrenees.  Lots of pretty towns (dropping to 50kph) and rolling fields.  Good to be in France.

It’s getting warmer, oh yes!  Fantastic roads today … the N10 seems to be mostly free dual carriageway with odd bits of free motorway.   Being ‘le weekend’, the roads are quiet with few trucks.  We covered quite some distance today.

Blissful empty stretches of tarmac … we still remember the feeling of gloom as we hit the M25 traffic in rain on our return to England last April.

The scenery so far has been pretty flat but as we approached our destination, we could see the great outlines of the great Pyrenees.  Our site is just in the foothills.  The campsite is quirky.  Lots of terraces, empty this time of year and we positioned ourselves with a great view over them.  Free range foul of all sorts.  The host lady spoke Fr, Eng, German and Dutch (she was).  The Aged P’s arrived just as we set off for a walk, which we then aborted in favour of … drinks and supper in the van … and every following night.  The Aged P’s decided that Jez is very roomy and cosy.  Their apartment very traditionally Fr with high ceilings, ancient furniture and functional ablution facilities, but since I had all the spices etc, it seemed to make sense for me to cook.

Found the crysanthums market, which people were buying in huge quantities.  Don’t know if it is a SW France peculiarity, but crysanthums everywhere here.  We were slightly worried as we thought they would be a food market as we planned to buy our lunch!  We then found food market under cover.  Bought some lovely cheeses, including an amazing goat covered in ash … really delicious!  Honest!

The picnic site, we eventually found was by the side of a leisure lake, and we weren’t the only ones doing it … but they had wine!  A walk around the lake revealed a beach, fitness equipment, fishing areas and jet ski jumps. The French and Germans seem to do this outdoor sports facility really well.

There had recently been a Breast Cancer Run and a lot of trees were ‘dressed’ … given I am now into knitting, I appreciated the work gone into it.

On arrival at Sauveterre, we happened to park next to the TIC … who gave us a plan of the town with some information.  We followed this and like what we saw … some good views, quirky architecture … all a bit out of the ordinary.

Part of the bridge had washed away.  Nice tale of a Queen who was thrown into the river for having murdered her child.  despite having been bound up, she survived and the child was subsequently found alive.  I wonder what retribution she made?

We drove back to Salies and had a wander around here.  This is a spa town since a wounded Boar was later found with its fur encrusted with salt.  The ‘top’ part of the town has the beauty treatments and posh hotel … yet compact and nicely done.  The lower part of the town is Medaeval streets around the bend in the river.  We found a super restaurant for lunch … it was a few Euro more than another formule, but the quality of the food was excellent  … and I was allowed to bring Oscar in … such a good boy, he just lies down and sleeps.  J and I elected to walk back to the campsite to shake down our lunch.  We discovered the Aged P’s partaking of a sneaky post lunch Port … fun that!  As it happens, The Aged P’s had come back from Spain via a big booze shop much frequented by the French for its cheep prices.  Over the couple to days here, we managed to get through quite a lot of Port, both colours, gin and dry martini, wine and I think (memory affected obviously) there may have been some Pinot de Charente too! 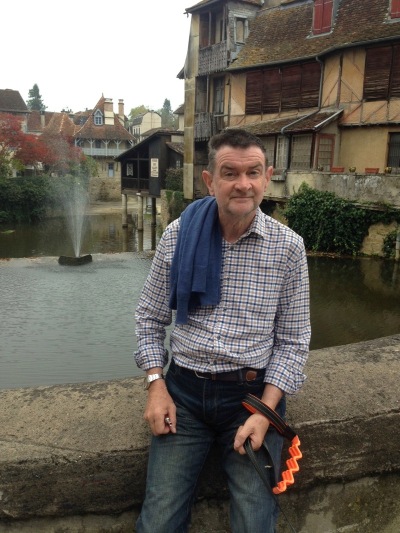