We started to walk Oscar in St Jean de Luz … planning a serious walk, instead we got a serious drenching – K’s face cream dripping into her eyes … stinging …  a tissue being repeatedly wrung out with which to mop them … there really is NO fun in this … back to the van … to change everything down to underwear.  Spain TODAY it is – the weather must be better in sunny Spain.

The precipitation followed us into Espania – with determination… But we held firm – even when BradNav took us into the centre of San Sebastian with quite narrow streets – but we reached the Aire having replaced Brad with Madge as ‘closing pitcher’ – Chicago Cubs fans will understand – first World Series since 1908 – by 1 run after 10 innings!  The Aire is large with lots of vans but well spaced apart and handy for the City and not a train in earshot.  K got soaked (with rain) for the second time taking Oscar for his constitutional – and it has rained all day…….  hunker down time with heating on.  Van starting to steam up and smell like a Chinese laundry. 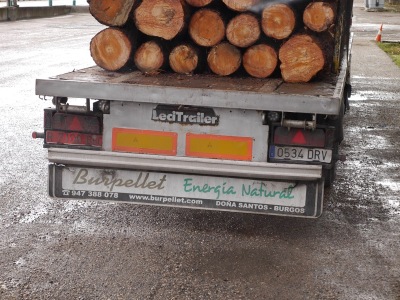 Would that be methane creating energy?

‘San Seb’ – nothing to do with San Sebastian Coe, Lord Coe – he of the great duels with Steve Ovett and Steve Cram in the 70s – where has GB middle distance running gone?  Perhaps they need some ‘Burpellets’?  I’ve ordered some to improve my running… Rain, rain and rain… we walked, got wet, walked, got wet – is this boring the kn***ers off our reader? Nice seafront and sights of the surrounding hills – and Tapas! Pintxos is the Basque word for tapas.  The find(s) of the day.  Oscar was allowed (quietly) into each of 3 bars where we sampled the local delights… in one bar, we could easily have lost him to a lovely young family lady who fell for him (as opposed to us – we generally fall over him!) and fed him – bread! We separated him from his latest conquest (perhaps I should have had a Welsh Springer when I was a young lad on the search for ladies?).  I would have lost out to the dog, inevitably…

Internet pix as far too wet to take out our own cameras.  Our aire was bottom right, about 2 km inland.  We walked along the front and around the headland hill … we deserved our bar / tapas crawl.

Back to our Jez van, soaked and cold – but the indomitable British/Irish/Welsh stiff upper lip never crumpled – dried out and we dove under the duvet for warmth, you understand. Now, you will know that ‘dove’ in Americanese means ’dived’ – just testing…

A driving day … as far as we can go without over tiring ourselves to find some sun.  But … Snow ploughs in sunny Espana? K spotted 3 and signed for salt gritting.  We suppose it is November after all… the van registered 1 Centigrade on our trip.  No change in weather Burgos and lots of other places we’d planned to visit, passed.   Onto Segovia – rain, hail and sleet all on the journey south – with a forecast for snow overnight!  On the approach, we spotted a feint dusting of the white stuff on the hills.  The ACSUL may come into play again (AngloCeltStiffUpperLip) tonight…   Starting to feel like those tornado chasers in the States … will we ever see blue skies again?

“But ho – what light from yonder window shines? It is from the east and it’s my Juliet”  I may have just murdered some Shakespeare/Marlowe text….  Anyway, it was the sun shining from the east in a Segovian morning – what joy indeed… No snow – above freezing (just) and sun/cloud – our cups floweth over – but we didn’t spill the tea/coffee for brekkie.

Now, we all know what an Aqueduct is – no, it is not watery sticky tape from B&Q, James – obviously too much DIY in my past…  The Segovia Aqueduct is 16km long, built by the Romans in 1 AD from dry stones – no mortar – used until the 19th century – amazing!  Did they have health and safety legislation then? Probably – if you breached the laws, you received a special invitation from the Emperor to make a guest appearance at the Colliseum – to have your X factors removed by a Gladiator wielding a Gillettiator….  Ouch!!!

Lunch with wine and Oscar sleeping under the table – our third table move for doggy reasons – including a ride in the elevator to hide us from other diners…  Spain is NOT like France when it comes to dogs … they are really against the law – so much legislation against them (muzzles, tethered in cars, not on busses, bars etc), but fortunately many places seem to be happier to take our Euros than bar us from the bar.  We chatted briefly to a Spanish family who live in Southampton (So’ton to locals) – and a lovely Portugese waiter who spoke Spanish, English and Bulgarian (latter due to a previous girlfriend … amazing what love can do!)  The photos speak volumes.

Buenos Noches… ‘We learn it from a booook’ (Faulty Towers – actually on Podcast No.2)

The Aqueduct started underground and close to our aire … all we had to do was follow the (Yellow Brick Road – oops) Aquaduct into town.  Amazing how narrow the water channel.

Oscar has no respect for the aqueduct’s age!  It carried water and must be watered.

It got higher and higher.

I’m actually under an arch, but its too high to be in the picture.  Despite the sun, I am sporting THERMAL long johns, vest, trousers, thick socks, long-sleeved T shirt, cotton jumper and mega wooly mammouth recently knitted by Mother.  I kid you not, it is somewhat cold.  Contemplating a doggy jacket for Oscar!!! 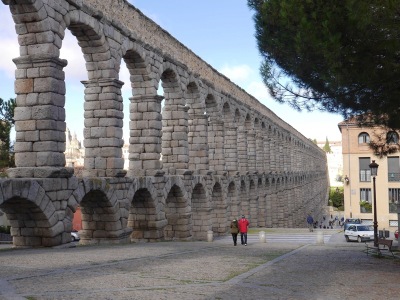 Oh and then it got really high.  But only ever 2 arches with no mortar!  Once in the town, it went underground. 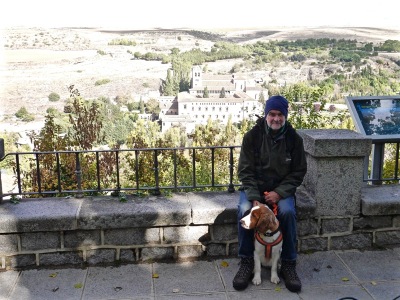 One of the things I love, other than my two boys, of course, is this wide scenery.  The middle of Spain is BIG.  Views of hills, some with snow!  But where we have driven it is dried grass and hay stubble, with a sienna earth and few trees. 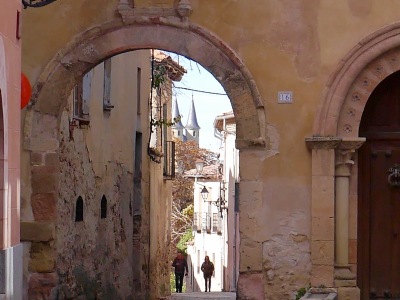 Our first glimpse of Sleeping Beauty’s castle … apparently Disney modelled it on the Alcazar … I am sure the Germans, who have plenty of fairy tale castles, may contradict this.

We elected not to go in … not expensive, but we use Oscar and having to take turns as our excuse.  It was much embellished after a fire in 1862 in this OTT style … 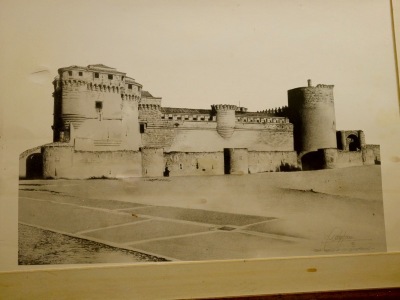 … and here’s a pix of it before Disneyfication.

Lunch in a quiet / out of the way part of the restaurant … once most of the other guests had left … J tucking into his house eggs, a meal in itself.  3 courses with wine and water for EUR24 … happy to be in Spain after French prices.

We still managed to finish most of it … Pudding, like cheese and icecream go into a separate stomach … I couldn’t eat all my main so I secreted a sneaky lot of grilled pork into a spare plastic bag which is now in our fridge and will form the basis of a pasta dish tomorrow … Waste Not Want Not!  Both puds had been generously sprinkled with cinnamon, not to everyone’s taste perhaps.

We really like wandering Segovia, especially with blue skies!