Steep steps up to the walled city – birthplace of St Teresa….she ran away to be a martyr, hoping to be killed by the Muslims … at age 7 (!) but her Dad brought her back – to rejoin the nuns later.  Nice market square and the usual bustle of Spanish town streets.

We really wanted to walk the town wall on the top – but ‘no dogs allowed’. Spain is definitely not as dog friendly as other countries…  we contemplated our next move over a glass of vino tinto and decided to walk the wall … but inside and out.  This was where the locals were perambulating …. the tourists, having paid, were on the wall!  Us – we mix it with the locals! 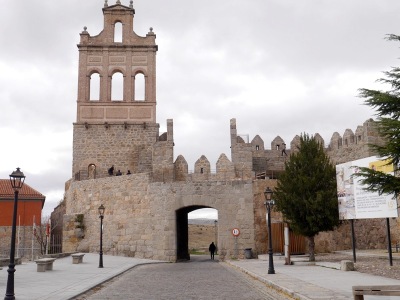 One of the city entrance gates, and pretty much our view from the Parking. 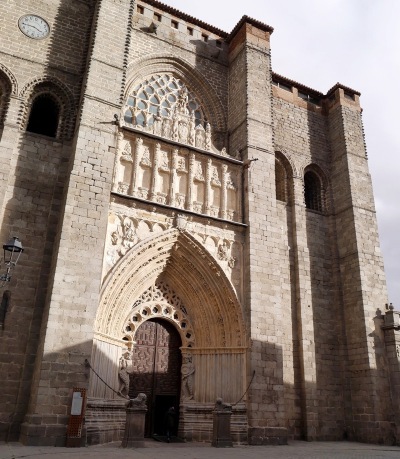 Entrance to the cathedral… slight strange stone sentries on duty.

Saint Teresa (the Spanish one) church and birth house here.

Granada is known for the storks … only spotted a nest.

Stone pigs were supposed to bring the merchants good luck.  This one was still in situ in a garden.  You could buy a miniature from the tourist shops.

The Medieval wall circumnavigates the whole town: over 2 km long, 88 turrets, 9 entrance gates, 12 m high in places.  Lit up at night it really was impressive.

Whilst in the town, we criss crossed trying to find a large jubilee clip … needed for the kitchen sink to prevent our cutlery drawer collecting all the dish washing suds and washing (!) all the cutlery again.  Despite K’s drawing and a translation, only small ones in stock, or none at all.  On the way back to our parking, K spotted an animal alimentacion and goods place the other side of the river.  We’d been contemplating a waterproof coat for our Oscar … never thought we’d come to this, but he does seem to feel the cold and doesn’t much care for the wet either.  I’m sure we might have mentioned that he is rather ‘special’!  Having queued at the counter where the man was dispensing advice and medicines … lots of racks of kit behind him, but not ‘ickle wee doggy coats.  On the opposite side of the road was motor mechanic …. ahh, though K.  Her thought was correct – he had large jubilee clips.  EUR4 and the leak into the drawer is (mostly) stemmed.

A beautiful and brand new parking with services at PL (we cannot remember the actual full name).  Only stopped to use the motorhome services and have lunch, overlooked by some of Don Quixote’s white windmills.  We were on the way half out of the gate – when K met Pauline and Michael (we had chatted to them when we arrived earlier). Now while I was in the van awaiting my K directions – our good lady had decided that we should spend the night and have drinkies with P and M!!!  Not the first time we ‘flexed’ our plans – purely in the interests of neighbourliness…

An afternoon stoll and glasses of vino at the town square – is that a new thing for us, readers? I think everyone knows the answer to that one…

A lovely evening – and they fed us too!  Many thanks to you two – we really hope to meet you again and to return the favour…

Some of the scenery on our way to PL… 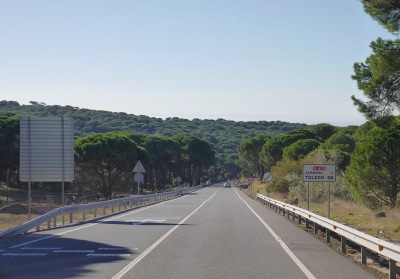 And again, we are in awe of the flat and smooth empty roads.

Cordoba was our destination, buy J spoke to another English couple by the services, who advised that there had been 2 motorhome break ins on the aire in the last week.  Shame, but we’ll have to see Coroba another times .. it is just not worth the risk.

We changed our plans and decided to go straight to Cabo de Gata, a peninsula that is a nature reserve.  We had wanted to also see Granaga, but there seemed to be an expensive parking by the Alhambra, or you found a campsite and caught a taxi … we’d investigate a train from somewhere.  However, on the journey, we changed our minds again … we are allowed to!

To Granada and Al Hambra it was.  It must be one of the very top attractions in Spain!  Dog welcome? No. We decided to tour separately in the morning.  Evening time saw us doing the Barcelona equivalent of the “Las Ramblas” family strolling. Wine and supper snacks.  We met an English father, son and grandson who resided in Granada … the son was called Arthur.  We’d previously met a Spanish family who had called their little girl Alice.  Is there Spanish fashion for English childrens’ names?  Granada was an amazing place to wander – young, slightly hippy and buzzing.  K even managed with the aid of another drawing to buy a stitch holder from a knitting shop … yes her art skills must be improving! 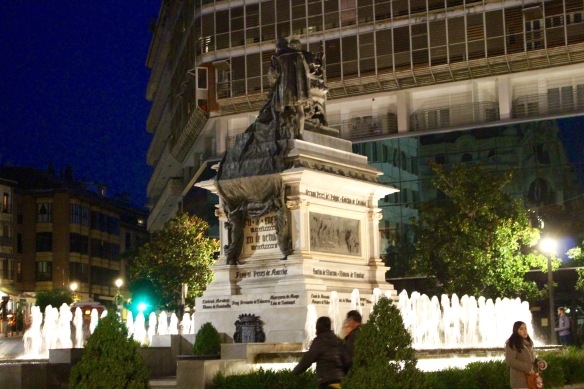 Columbus and Queen Isabella … check out her train.

We were the only van in the very convenient parking, although it was quite a walk back up the hill at the end of the evening – no wonder at Euro 29 per 24 hrs!