We basically awoke surprisingly OK after the excess of last night …. led astray by the Grey Gappers!  Having recently spent a few additional spontaneous nights at different places (we blame the company we’re meeting!), we had to head straight for Portugal for our rendezvous with my Aged P’s near Lagos.  We overnighted at VRSA (Villa Real San Antonio), having been told that it was a good stop over for cheap towels, bathrobes etc.  We parked in the gated aire there …. really not very pleasant and EUR4.50, as it was crowded, some rubbish and barking stray dogs if you headed one way…. all a bit derilict like the railway station adjacent.  However, it was walking distance to the town.  Essentially a few streets, selling only linen and towels.  The only other premises were cafes – we were not moved to stop and sample.  I did buy 3 small hand towels for Jez though.

The Aged P’s had booked a bungalow for 4 nights at Turiscamp in Lagos and then for another 4 at Olhao … we’re stopping in Jez.  We’ve done this before, and the benefit of having them really close by is brilliant for those (all of us) that like to have a drink!  Turiscamp is extremely well run and clean.  I’ve never seen washrooms with smart tiles like here.  Don’t know how we do it, but we both pretty much arrived at the same time …   So good to see them. 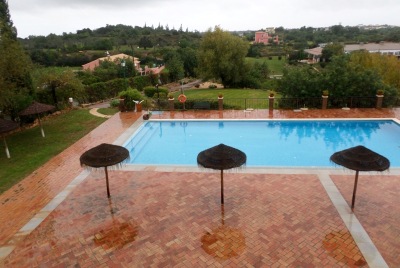 All immaculate, but given the rain there were not many users.

Large pic, as need it for so many bottles.  Most of this is sherries … for sampling and comparing.  Tonight, we just finished a Canasta and ???, I forget!

J here on:  One of the letters that Diane and Grahame brought was news of a tax rebate of £4k for me – an instant excuse for a good lunch out !  Excellent luncheon at a recommended fish restaurant in Lagos…..  Wines to accompany the dishes…Heavy rain most of the day !

Sherry sampling tonight was two Manzanillas and a Tio Pepe – a neighbouring motor homing lady saw the bottles on the booze bar in our van – she laughed when K said the contents had already been much reduced – by sampling ! 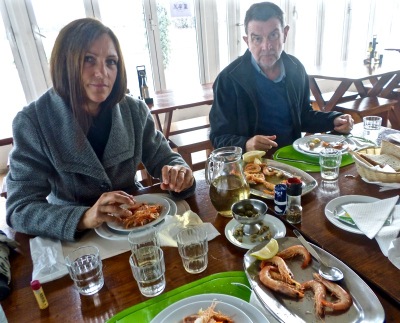 Prawns with garlic, salmon and swordfish … no room for pud.  We’re discovering that portion sizes in Portugal are HUGE.

We wandered around the town centre and bought ice cream, some window shopping and some sunshine….  We even managed to loose Dad for a short while, but her turned up again like the proverbial bad penny, having already had an ice cream…

Even out of season, Lagos is geared to tourists. 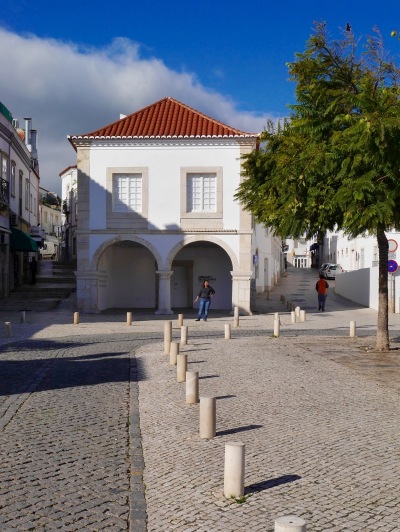 The market place where slaves were first traded.

I did a couple of loads in my twin tub and turned the Aged P’s deck into a Chinese Laundry … spot the girl guide line back and forth from the eaves!

Aged P’s had been before and knew where to go … Caldas de Monchique – slightly bizarre spa hamlet with a nice atmosphere, built at the head of the spring, with a bottling plant and a spa hotel.  A few bars … so …early glasses of wine and uphill to a beautiful picnic spot …

…  up to Foia, the highest peak in the Serra de Monchique.  Almost at the top we stopped for a picnic.  Mostly but great views out to the Atlantic (we thought it may be the S coast, but I checked it in the guide book).  Several cars were stopping to fill water containers from a spring … K went to investigate.  The very nice chap (38 yrs old, a site foreman who has worked all over Europe on major constructions, spoke excellent English and is home for a month for Christmas) gave me a 5 litre container to take away!  I spoke to an Irishman who has lived in London for 50 years and still has retained his inner city “Liberties”accent… 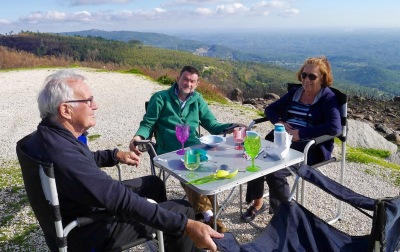 Out to sea over humpy ground … I thought it looked volcanic (most places are!) and evidence of a recent fire.

Sherry sampling tonight was the best Olorosso of last night and a Cream and Moscatel.  Think we may have hit the Perdro Ximenez too!

We packed up from Turiscamp in Lagos and headed east to Olhao.  Whilst the Aged P’s bungalow was larger it was dark in side with dated decor … but it did have a great patio for a BBQ.  Sherry sampling tonight was a free for all, drinking up the ends of a lot of bottles! 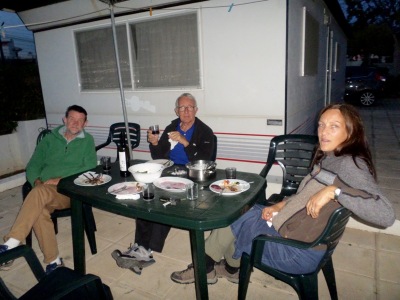 Lunch at an Irish pub “The Black Anchor” turned out to be the most spectacular meal of the Aged Ps visit.  we’d only stopped for a drink thinking an Irish bar is not going to present the best of Portuguese fare, but how wrong were we – melon, parma ham, sea bass, veal, garlic prawns and fish cakes……..xxxxx  and wine… definitely worth the positive Tripadvisor post from K – and the same for the Tuk Tuk tour…..

The Roman Bridge – called so due to its shape. 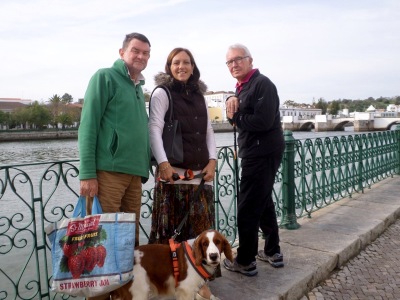 Outside the free to enter small castle on one of the three hills … a garden and tower inside with views. 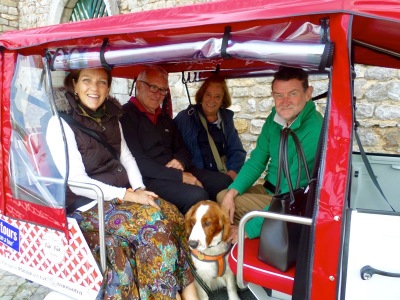 We all just fitted in … and Oscar, who some unaccountable fear of my father (a dog friendly person … has to be … he’s dog sat, walked and fed all my other dogs), even lay quietly under his legs. 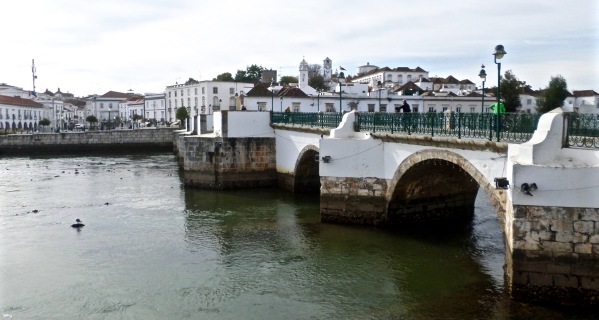 Estoi promised much – and didn’t really deliver! A Pousada hotel (SLHW – “Small Luxury Hotels of the World”) built from an old palace – the guide books were out of date – the much vaunted gardens were shut and having rebuilding works – from what we could see, they were very early stages in this.  After a fairly brief walk, we selected a small cafe bar for lunch – and the resulting food was not very good!  On our tours, there have not been many places where we have experienced disappointment – not  a bad result in 20 months of full-time travelling…

On our way out of town, we looked for the Milreu Roman ruins – and guess what – we didn’t stop to even look having no signage to help us find them.

Very little to see garden wise, but you can see the impressive building of the Pousada behind.

Square where we had the rubbish quality lunch … a nativity scene under the tarpaulin.

Olhao town on Saturday has a bustling market – Grahame drove and found free parking near an carpark full of motorhomes.  Lots of caged birds, turkeys and chickens on sale – is Christmas coming soon?  K not tempted to buy a gooble cock and fatten it up!  We let Oscar off for a good romp along the seafront. A bit later, we found – guess what? – a cafe bar – for a glass of vino tintos!  Only one – as we had planned a BBQ for the afternoon….at chez Jez.

I fired up the Weber (invented in Chicago – as was the Ferris Wheel – no obvious connection to Portugal – just nice to keep our reader informed…) with lumped charcoal from the Murco Fuel Station on the Gloucester Road near Almondsbury… will you get back on topic, James please!  OK so I won’t describe the ‘twigettes’ I used for kindling, then….

Chicken and bits – and wine – for 4 ‘OS’ folks – no, not Ordinance Survey people – just ‘Old Soaks’!  No Sherry … tonight was a Port night.  White as an aperitif and a good red after.

Reasonably early to bed – Grahame and Diane will leave for a few days in Faro in the morning…and then back to the UK winter wonderland – just imagine readers – they have to wait a whole month before their next holiday in the sun in South Africa!  Life’s a real bummer…

Faro is off to the left. 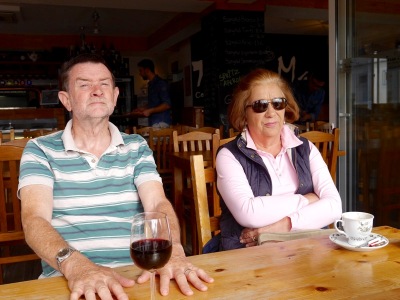 Yes, mother is at the coffee again … all this caffeine really is not good for one! 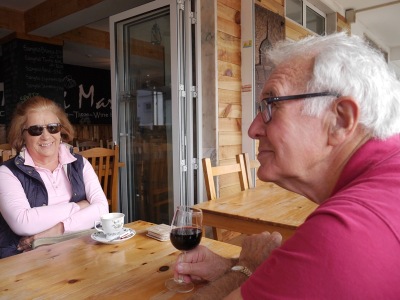 If not a pet turkey, how about a canary?

After a nice week with K’s parents – outings and dining – we decided to have an alcohol-free day!  Yes, really!!!   Although we had not warmed to the campsite, as it is a bit higgledly piggledy laid out with lots of permanent caravans and campers, we decided to stop another day.  We’ve never seen so many huge Concordes and Carthegos … Nordic countries were well represented.  Today was van cleaning – our campsite has very sandy soil which seems to want to spread itself all inside our Jez home …  We had a ‘dry’ BBQ – unheard of!