We departed from Alcoutim with some sadness – one of our gems in Portugal so far…..and a lovely free aire.

Alcoutim aire over looking the town, river and Spain.  Jez is behind the service point.

Heading north, the roads into the Alentejo region became a bit “bockety” – an Irish word for ‘uneven’ – Amelia – you will know this saying…. all cupboards rearranged involuntary.

Minas de Sao Domingos is a bit of a ghost town – copper mining took place for 100+ years up to 1965 – an English company was in charge and they didn’t treat their employees very well – lots of tiny cottages lining the streets – the town council is trying to rebuild anew to attract tourist revenues – the old character will be sadly lost though – progress….?

Armed with ‘MapsMe’, we set off for an exploratory perambulation – a nice cafe with wine – well, its almost a very important birthday – tomorrow!  K will be xx years young…

Stunning white church on the hill, much construction activity – and the inevitable photo by moi – of a Caterpillar excavator (K:  You should see his collection of earth moving models!  Beats etchings – just!).  Public showers – no washing facilities in the workers cottages. The English cemetery was for workers from Cornwall – it is said that soil from Cornwall was imported for the graves – only 6 still standing. The colours in the open cast mine slopes are striking – green, ochre and yellow – with deep water and sky refections. Another glass of local wine – 1 Euro for 2 glasses! – about 45 pence for a medium glass of vino – Bristol price – £5.00?

Oscar played his ‘you won’t take my stick away’ game again – his ‘happy dance’.   We rounded off with a visit to the Post Office and the supermarket – and a short visit to a miners cottage – a real piece of Portuguese history…

Quiet in our aire tonight – we may run tomorrow around the nearby lake….  wishful thinking!!!

Another nice water side aire – tree lined and loads of space – 12 vans, 6 of which were UK vans – are there any motorhomes left in UK? Lots in Portugal, every where we’ve been… 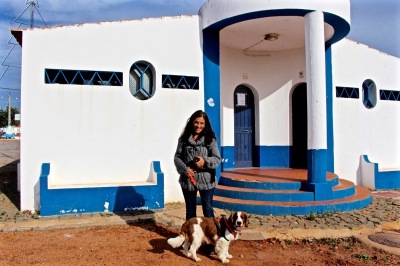 A motorhomer told me ages ago that lots of Portuguese villages have public showers for the residents.  We’ve not had to use them, but they looked clean.

I really liked the pinnacles atop the columns. 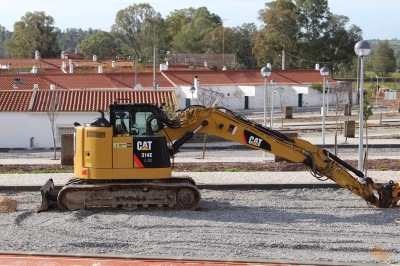 The glass of white costing only EUR0.50 … we are so happy with these prices. 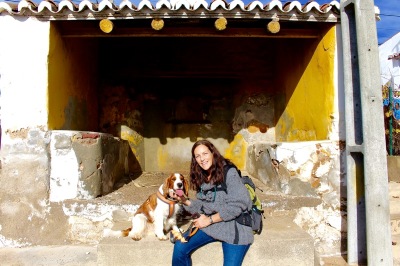 As well as communal showers, this was a communal oven . A couple of them around the town.

The pit was open cast and when it stopped being worked in 1965 it was allowed to slowing fill with water.  Not suitable for swimming as all the minerals make the water toxic as well as an odd colour.

The ruins of the offices and the loading bays for the ore. 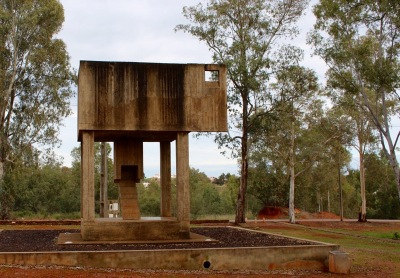 It puzzled us … newer than the mine workings and what was it supposed to be used for?  J spotted the small plaque … a art installation to remember the mine workers.

A typical mine workers cottage.

Cards and tea in bed for K … J not a graphic artist, had made me a card … it even stood up 🙂  I had been royally treated by J who had taken pity on my constant gasps of annoyance when trying to use my iPad (think it may have been version 1! – it is definitely dying!) and had bought me a new one.  So happy … he’d involved my whole family just about.  Chris had bought it in the States, Clare bought me a cover for it and the Aged P’s bought it out with them.  Such a happy bunny!

J did all the morning chores, whilst I walked Oscar until I could not cross a ford due to the recent heavy rains.  We only had to drive a short way to Mertola.  We parked up at the top of the town which was handy for the castle and old town.  From the top we spied the waterfront parking … we’d eschewed it as the road looked tight.  Another van was there so it was doable … we squeezed Jez down and fortunately most of it was one way.  Parked cars are such a nuisance when opposite overhanging building and lamp posts!

The town wall falls away on the right from the castle above another waterway and gorge … really impressive from afar.

The church on the site of a Moorish Mosque.

The castle gates were open and consequently free.

We left Oscar in the van; watching us from a window as we departed and we headed to a restaurant we’d spotted that looked full of locals.  For the first time in ages, we were able to eat inside.  J’s Migas is a local dish … using up stale bread crumbs, mixed with garlic and green olives.  It was much lighter than it looked and really tasty.  Again portion sizes are ridiculous and there was a lot left and this was with no starter!

Minas with pork and sausage. 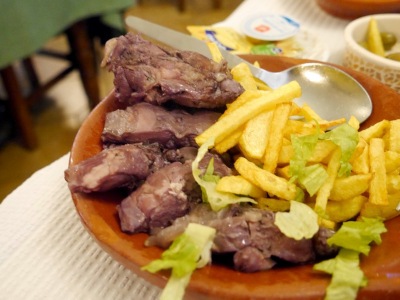 My rabbit in wine … I made good headway, but had help with all the chips!

Oscar was asleep … on the table when we returned!  I left J sleeping off his Migas (in the bed, not the table) and took Oscar for a walk exploring a bit more of the old town.  The guide books described Merotola as an open air museum.  It has been largely unchanged since its Moorish rulers.  A small supper of cheese and port rounded off a very special day.

Part of a Roman lookout over the river from when Mertola was an important port. 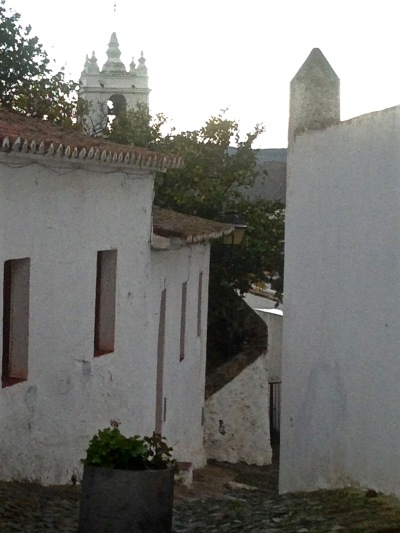 Given the narrow streets and being Saturday, we set the alarm for 7.00 so we could move Jez back up to the big carpark for breakfast before locals started blocking the road with their cars.  We did what for one chap to move his ‘shooting brake’ towing a trailer with about 5 English Springers.

We keep commenting on how attractive the scenery around this part of Portugal is … not stunning but really pleasant with always something to look at.

We headed down to a wild spot on the Arade, that I think Sarah, Mac and Rockydog had told us about.  We saw some motorhomes in a massive carpark just under the dam and pulled in.  Lots of space and sun.  Another parking a bit further up was really congested – not our scene.  Only a conclave of 8 pretty permanent German motorhomes and one permanent British van here.  They must be resident for months, given the worn paths around the truck.  An old M reg camper van pulled in not far from us and J went to say hello.  Mary who wilds for the last 10+ years in the Algarve for the Winter – she would travel all the time, but has a 3 month Winter reprieve from looking after her 92 year old Mum.  She’s backpacked extensively around the world – Australia, the States, where she arrived with no money and obviously all over Europe.  She put us to shame … she keeps life simple in her van, has done a lot of the repairs herself … including adding 3 sachets of pepper to a leaking radiator to seal it up.  She made J and I feel very un-intrepid.  She is an avid walker and gave us some advice on the route around the lake.  She must have thought we looked fitter than we are, as the walk took about 4 hours and we reckon was at least 12 miles. 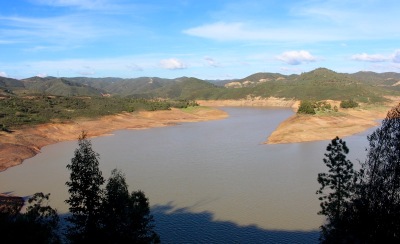 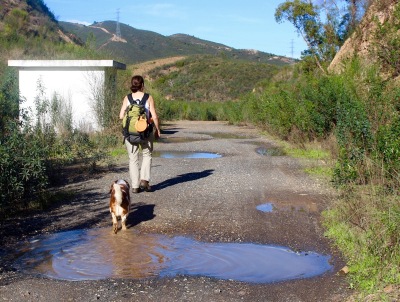 Check out Oscar wading through the muddy puddles! 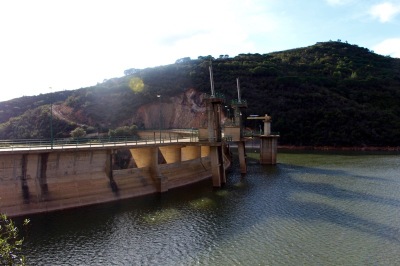 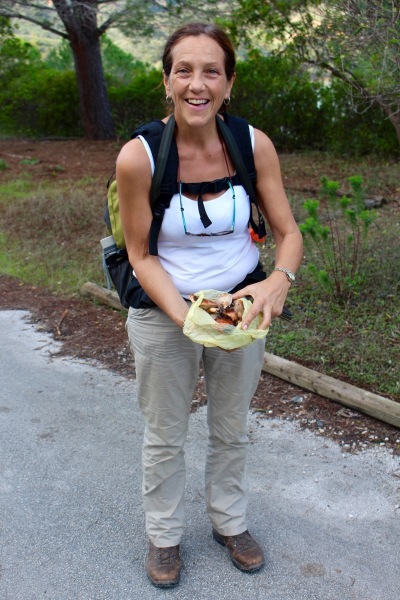 I was convinced that these mushrooms are the same as the ones we sampled in the bar at Alcoutim … a nice little harvest transported in a dog poo sack … so handy.  Sadly, when I tried to cook them they were very bitter and had to be thrown away.

Mary had not warned us about the very steep scree slope.  My balance is shocking, my feet slide uncontrollably and I have a real fear of falling over … solution: come down crab like on my hands.  Oscar decided to help!  Honestly, it was a lot steeper than it looks!!!