Early morning saw a lovely mist over the lake from our stunning waterside pitch. After a peaceful night’s sleep, we ran for 3k with Oscar (who seems to have recovered from his irreverent peeing of yesterday. We brekkied and set off to visit the Museo da Luz – leaving O in charge of the van again, having ensured that K’s coffee beaker was stowed away safely this time (last time, it had been carefully placed out of the way on the table; on our return it had been Oscar-up-ended … onto a seat … coffee drained).  The highlight of the museum is definitely the film of the relocation of Luz village – the original homes were demolished for the new lake caused by the Dam. We could write a lot about this film – it’s heartrending and we can only recommend it highly to any of our motor homing friends who may visit the area…

We were parked up by the motorhome on the shore … one of our best ever spots.  And there’s a free aire in the village. 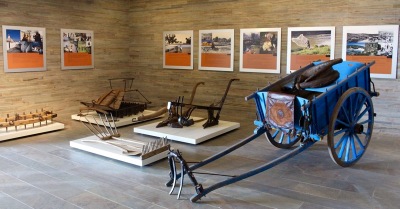 The Museum had info boards in English with some bare details about the dam and flooding the reservoir, but most of the information came from the film with English subtitles.  It was very moving, as people had lived in the old village all their lives.

The new village was an approximation of the old in terms of layout, so most people had the same neighbour.  But the houses were not the same:  there were reports of bad build quality and people were left without large fireplaces where they would smoke their slaughtered pig etc.  One improvement J spotted was that the electricity cables went underground.  Of the 400 residents that were relocated only about 200 are still alive / here.  As with all these rural villages, many young people have headed for the towns so there are many vacant cottages.

We pointed Jez in the direction of Monsaraz – another mountain town (?) we thought…  No way Jose (not Mourinho!) !  It’s that word again…stunning even on the approach. We passed the first wild parking area as we had seen vans parked up higher. Got to the turning in and balked at the narrow entrance – millimetres wider than Jez. I walked up to do a recce and enquired of the chap in the first GB van about access – Norman.  He very kindly came to our van and sat in the cockpit to guide us up a different entrance – milk of human kindness?  Now our reader(s?) will gape at this – Norman is 80 and his wife Beryl is 90 – and they are virtually full-time and have been travelling for over 22 years)!!!  How about that for inspiration, fellow bloggers? They have driven across the Pyrenees in snow with our snow chains, went to Morocco without a map, currency or Satnav and got lost, but reached the Sahara Desert and travelled 2500 km – a Moroccan man offered to buy Beryl for 2 camels and Norman had verbals with some local policemen about having taken movies of police road blocks … he stated he would have taken a pic of the Queen and suitably impressed the policeman backed down.  To be fair, Beryl was only 86 then! And it was before her stroke a couple of years back in Denmark.

We then realised it was a collection of UK vans – 5 in all with some French and NL neighbours.  The parking is just below the castle.  Lots of vanny chats – and up to the town.  360 degree views – very narrow cobbled streets – no vehicles up top. I cannot use the word stunning again, can I?  How about “Stunazing” or “Amazunning” – that might scratch the surface… By far the most impressive hill town we have seen in Portugal. K bought some more rugs for Jez because a certain K9 likes to decorate the floor with sand – but, we do our bit too.  We were only intending to stay one night but immediately increased it to two. We only saw parts of the town and not the castle.  We will walk to some menhirs tomorrow and see the Castello.

Sunset with wispy clouds to spread the light was ’stonkingerazingesque’ ! 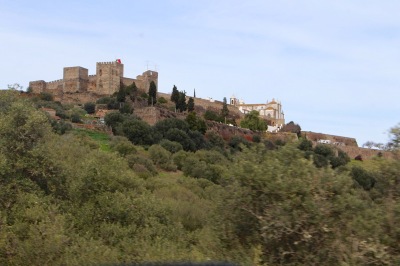 That’s where we’re headed … of course, I’d checked the route is suitable for Jez, James!

Views can’t get much better than this.

The Pillory and well between two churches in the main square. 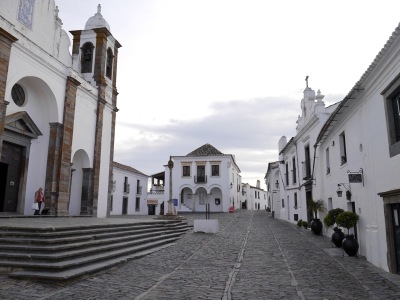 From every side street, a view of the surrounding countryside. 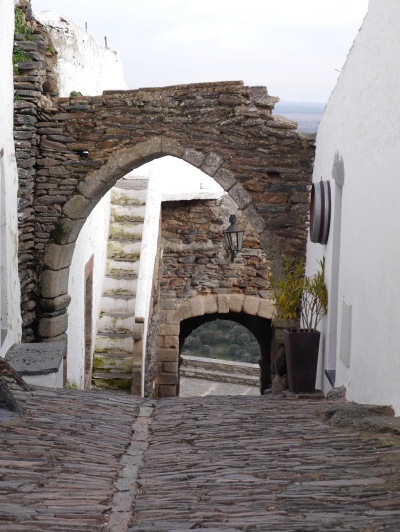 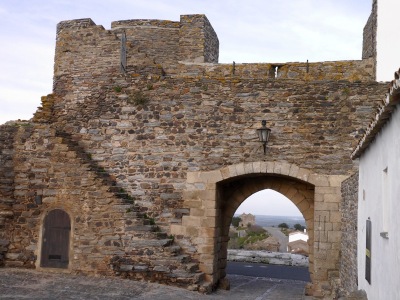 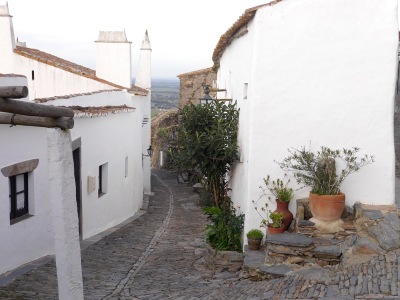 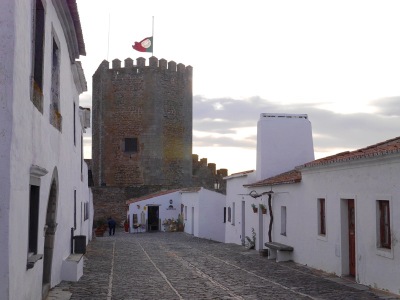 The flags are at half mast because some days ago Mario Soares died – he of the ‘Carnation Revolution’ fame that ended the rule of Dictator Salazar on 25th April 1974. 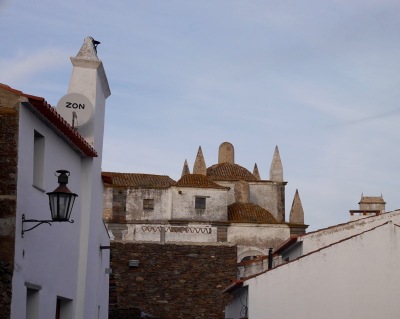 The reservoir is quite unlike a lake as it has many many islands on it and the coast is not smooth, unlike a glacial or river formed lake.

594 – Wednesday 11th January:  In Search of Mehirs and Lunch

I managed to capture some sunrise photos at 7:00 am this morning – the emerging light was ‘nice’ – or maybe gorgeousness personified.  We waved goodbye to Beryl and Norman this morning – where will their next adventures be?  Wish we had a way of knowing … so inspirational. 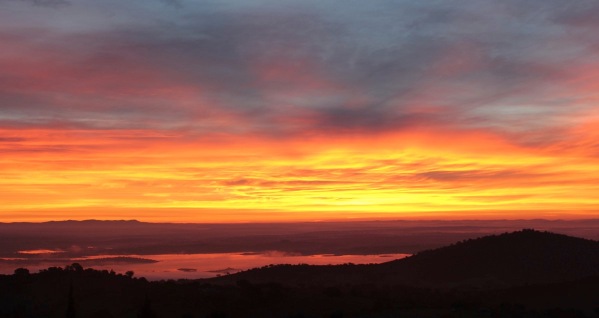 We walked to see some baby Stonehenge-esque Mehirs – K and O posed for photos. It’s Spring and the little lambs have sprung. We thought we would spring a little Monsaraz restaurant lunch on ourselves – no!  Each of four establishments didn’t want dogs on their terraces – dog unfriendly – loss of revenue for them – money saved for Team Jez.  Lovely homemade soup in our van and knitting chats between Katherine and Rosemary from the van next door.

The Castle of Monsaraz beckoned and an artisan shop for one more floor rug to compliment the two we bought yesterday.

Our two day stay has been one of the most memorable experiences of many fantastic journeys.

One way of keeping the grass down in the vineyard.  The region has some rather good Alentejo reds.

Discovered in 1970 and placed atop a granite base to take it up to original height … why are they so often phallic?

Views from the castle.

Oscar still attracting a lot of attention; this Brazilian showing me his dogs back home.

The castle doubles up as a bullring.