I’d done a bit of research about a Moscatel of Sebetul tastings having acquired a bit of a taste for it.  A useful English ex pat lady (http://juliedawnfox.com) had written up the Bacalhoa winery and I’d pre-booked a tour for us and Alison.  At only EUR 6 each, we really did not know what to expect other than:

HOWEVER …
We pulled into the carpark in plenty of time alongside a blue terracotta army!  As we approached the reception, we were told that we would be doing the palace first and escorted in a mini bus.  Off we set … out fellow English speakers were two Lithuanians accompanied by a Lisbon resident for the US.  This proved to be another … ‘Goodness, how lucky were we’ moment, as the American lady not only brought all her visitors here and had visited 12 times on a tour, but knew the vinyard/palace/art collection owners and had been to parties here.  Again, how lucky: our guide George was enthusiastic and took much longer than the tour planned.  The Palace was crammed with gems of art.  The owner of the vineyard had made his money extracting gold from waste rock in Africa and is the 9th richest man in Portugal … and with an amazing art collection.  This is spread between his various properties and public museums, including one on Belem, which we’d seen the outside of yesterday.  As well as tiles dating form Moorish times, there were paintings, sculptures etc.  The gardens came alive under George’s explanations of the pleasure gardens … hidden courting benches, sailing on the pond and summer houses.
The American lady added odd snippets of insider knowledge about how the family made their money and having been thrown into the pond at parties.
After the palace, we were driven back to the winery … but wine had to wait … we were taken around the art galleries of the private collection.  We were so close to the exhibits … in fact we had to tell Alison to put her hands in her pockets as she wanted to stroke everything …  A slight wobble sound and Oh shit, from her had us seriously concerned at one point!  The Art Deco has me wanting to redecorate … along with the marble bathrooms (see previous post)…. James, how do you feel about going back to work to pay for it all?
Finally George was able to move our enthusiastic group along to the wine tasting.  An indifferent white, a stunning red, but at EUR10, not our normal drinking wine.  And thus onto the Moscatel.  A bargain at EUR4.10, so I bought a case.  Augmented by a couple of bottles as a gift from Alison.  I was interested in the difference between the 2 yr old and the 10 yr old … thought I’d buy 1 bottle as a comparison … so I asked George to point it out to me … and he gave me a tasting.  Aged P’s … I bought 2 bottles, plan to drink one and give you one … wonder if it’ll make it home.
The American lady was amazed that we’d discovered this tour as it is not marketed.  It really was an amazing trip and the staff recommended a local restaurant in an ordinary local town that was not only good value but stunning food.  We had the local DOP (which means it should good) Azeitao cheese … you cut off the top, relying on the linen band to support the side walls and spoon out the gooey unctuous cheese from within …  Alison had a huge prawn, I – a salted, onion, potato and cheese bake and J had the most amazing tender steak.  Fantastic.  What an amazing day when we had no idea what to expect.  And how lucky were we! 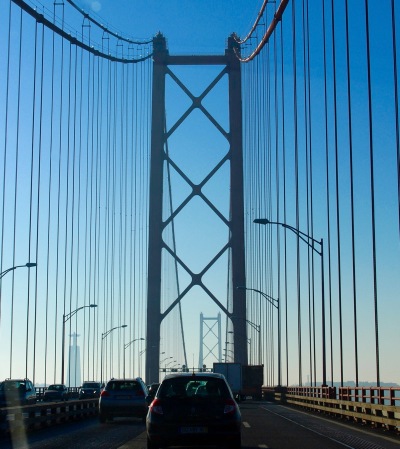 Misty start to the day, but we crossed the 25th April Bridge.  It may be longest in Europe, but it was a bargain compared to the Severn Crossings (James used to be the MD) at only EUR1.75!

From the web site:

Behind every great wine, there lies a great story.

Join us for an unforgettable visit of Quinta da Bassaqueira and discover its history which brings together wine, nature and art.

We invite you to discover different collections divided into three thematic groups expository:

“Out of Africa” is an exhibition dedicated to the Queen Ginga and three Landscape Wonders from Angola – the Dark Stones from Pungo Andongo, the Tundavala Gap and Kalandula Falls.

What a Wonderful World! It is a gateway to an atmosphere of glamor and perfection. It is being carried away by the Art Nouveau and Art Deco, is to let yourself be captivated by the euphoria of the Roaring Twenties, is to let yourself go around by the bright colors and metallic shades.

Portuguese Tiles from XVI to XX Century, used so lush and unparalleled in any European country, the tiles, which proliferated for more than five centuries in Portugal, eventually became a genuine contribution to our country’s cultural heritage and artistic world.

During the tour, take the opportunity to taste the wines and fully appreciate the pleasure which can be found in the degustation of wines.
From the tasting room, admire the tranquil scene of the Japanese garden, in which some of the works of the sculptor Niizuma are exhibited, along with a Kaki tree, the ‘great-granddaughter’ of the only tree to survive the Nagasaki bomb. 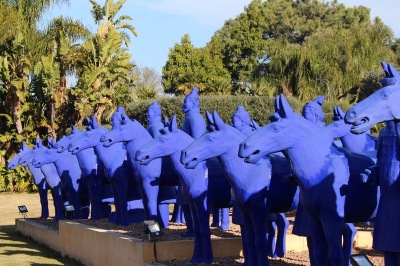 By the car park contained some unusual art … just  hint at what was to come.

Some of the wine is matured in these steel containers.  Others in 2 year old French oak barrels and the better stuff in American red wood – the same used for Scottish whisky and Sherry … hope they have a lot of trees.  The barrels do last about 40 years though and cost nearly EUR1000. 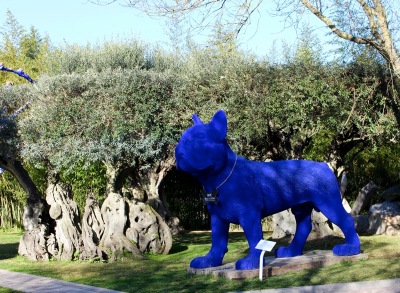 A large playfellow for Oscar.  Some of the olive trees were over 2000 years old and had been replanted from before the Barragem Alqueva was dammed.  It is great having explored enough of a country to be able to make connections and say “We’ve been there”. 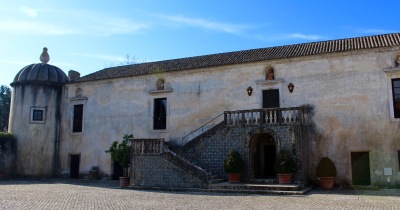 The front of the palace that a Queen (forget which) built as a playground for her son. 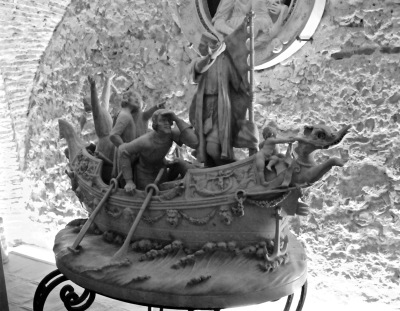 Marble and all on piece with Vasca da Gama. 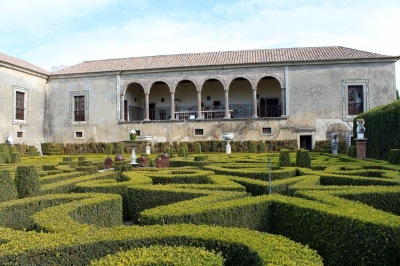 Parterre with 5 hidden benches for whatever couples got up to centuries ago! 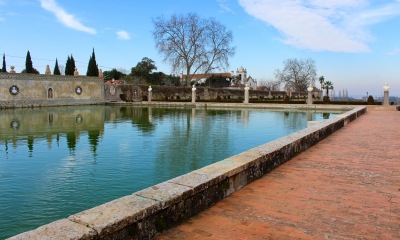 Originally the water had boats on for the royals to play with, but apparently the son of the current owner, who lives here, throws guests in!  Private information from one of the group who knew the owner’s family and had been to parties here. 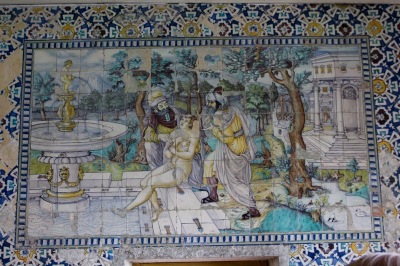 The Portuguese tiles original had colour, then when the trade routes closed so did access to certain pigments, so the tiles became only blue until the C19. 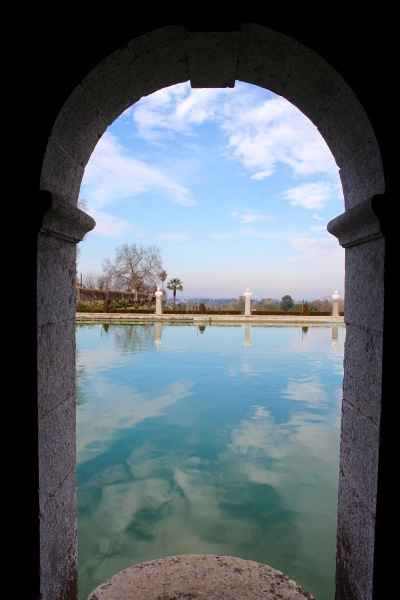 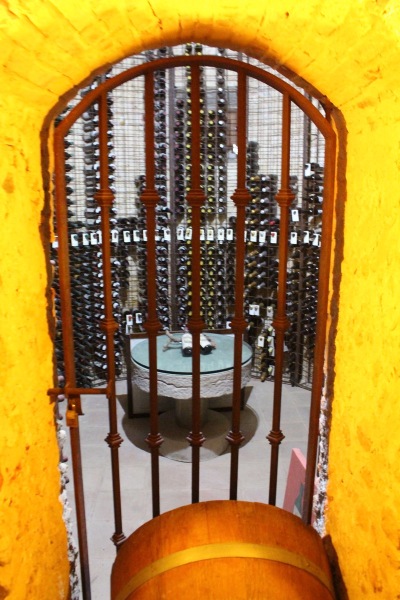 It is a new vineyard planted in the 1960’s … the first two bottles are on the table. 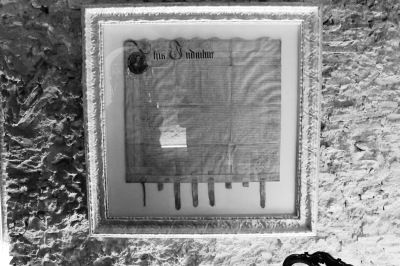 The current owner and art collector is within the top 10 most wealthy Portuguese and he is fascinated with Catherine of Braganza.  This is the original marriage contract. 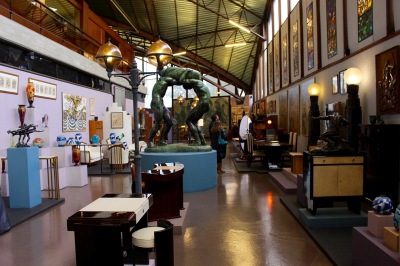 Just a small part of the Art Deco museum. 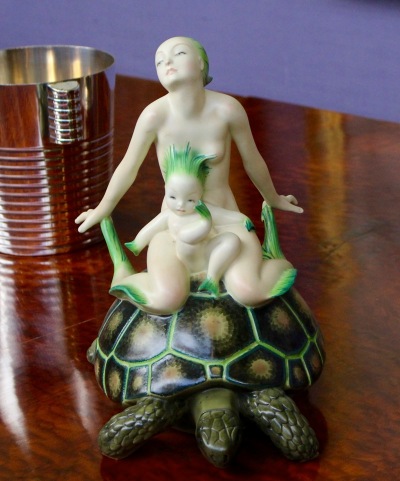 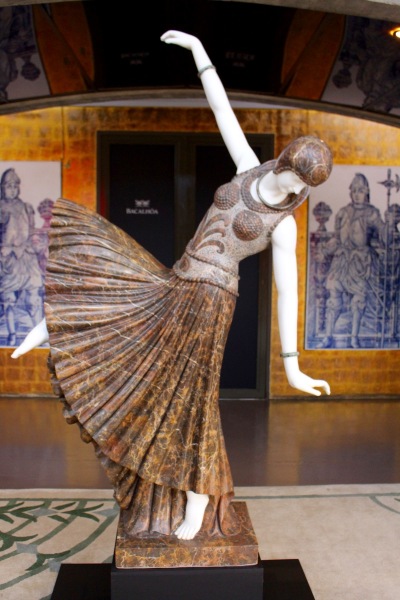 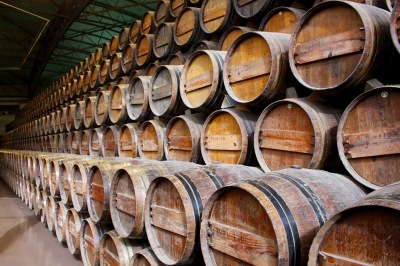 Some of the 2 year old Moscatel raging on French Oak barrels. 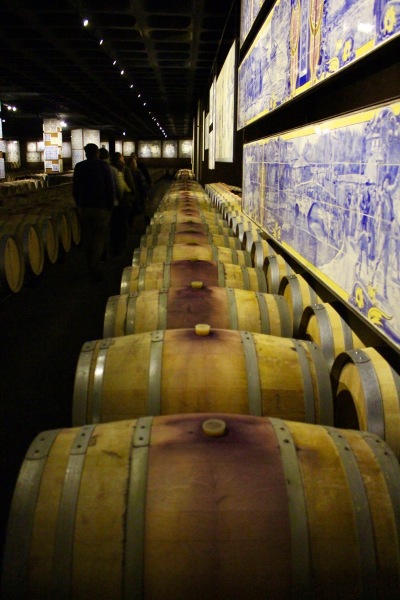 Wine aging in newer barrels with priceless tiles all around the cellar. 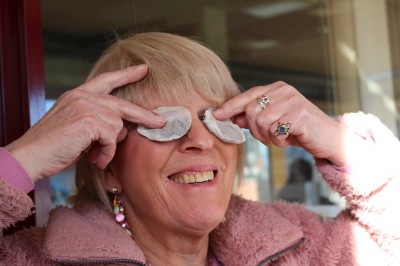 Alison using her decaff tea bags for a bit of eye therapy during lunch.

Leave a Reply to A Nomad Cancel reply