Such a lot seems to have happened in the past week or so – these posts may be a little truncated…  In advance of our friend Robert (from Brizzle) arriving, we repaired to a campsite for 2 nights – jobs – laundry, cleaning Jez – and resting, our team..

Tuesday – ‘Robert’ day.  Always a bit worried about taking our van into an airport (we got really stuck in a narrow car park in Chardonnay at Bordeaux Airport) – it was a relief to find an adjacent parking with a wide access and loads of space.  Easyjet bang on time – and off we headed to Porto Centro-ish. Robert had come from cold and Drizzle Brizzle – to Porto in blazing sunshine and 19C!  Our identified free overnight parking was fairly central – just along the river Douro.  The last road down to it was narrow – and with 2-way traffic – nervy stuff – but safe. Truly excellent parking with about 10 vans. Lunch on board (KHCS) – ‘K Haute Cuisine Soup’ – and the perambulations began.  Only 3 km to the bridge.

We passed a queue for a river cruise – instant decision to go – but dog friendly?  ‘Si’ – the owner had dogs and we assured him that the boys were placid – Robert, James and Oscar!    Stunning tour – Porto has 6 river bridges – different designs – one steel arch truss railway bridge designed by Gustav Eiffel’ colleague whilst working with Eiffel et Cie.  And the double decker iconic one, by the same architect, but by this time he had parted company from Eiffel.  We passed by all the Port establishments (didn’t sample) – wandered the streets – and took wine – Robert is a Bass beer man and sampled the local Brock Super lager.  He late developed quite a taste for white port.

Wednesday, our intrepid tour guide K had us booked on a 9:20 am (!) free walking tour – an hours walk from the van!  Brekkie was in the middle of the night, it seemed (our guest doesn’t normally rise early either).  The walk to the start included loads of steps – uphill…. We made it in time and drew breath….we were told the walk would be 3.5 hours long!  All told, this amounts to about 6 hours on foot…. we were now members of the Royal Porto Light Infantry (or RIPL – well, it scans better…).  Our guide was Eugenia and we had 2 other girls (German and French) for company.  Porto is quite something – Libraria Lello e Irmao (and worldwide famous bookshop) cathedral, buildings, squares – even the MacDonalds is a listed building with Art Deco and Art Nuveau interior.  I could see Hercule Poirot scoffing a MacPortoDeco sandwich!

We rested for very welcome coffee and cake – which attached itself to my beard (as usual) – and visited a famous guitar maker – they explained about Porto and Coimbra Fado guitars. “Fado” is the folk music of Portugal – haunting, sad and very beautiful – Eugenia played us some of the music.  The old railways station has the most amazing tiled murals – all telling a separate story.

One of the bridges is 2 level – car traffic below – and Metro rail on top – with pedestrians wandering along the rail tracks!  Health and Safety?

Lunch – Eugenia recommended a restaurant and the local ‘sandwich’ a “Francesina”.  It’s a cliche to call a meal ‘a heart attack waiting to happen’ – this so-called sandwich is enormous – with ham, sausage, cheese,bread and all ‘cooked’ in a homogenous cube with fried egg, sauce and chips!  Just look at Robert’s expression in the restaurant!  He ate it though – I managed half – and K sensibly had a small sausage.

On our way back to Jez, we couldn’t help but notice how stunning the river looks by night – with the reflections.  Doggydinner was late – whoops, sorry, Oscar…. we may have stopped for a small port on the way home!

Hooray – Oscar looked calm and was allowed on board.

The old Eiffel Maria Pia railway bridge 1876 with the new one behind.  Only closed in 1991.  I would not have fancied being in a train crossing in wind … it is very narrow with open sleepers.

Ribeira: a warren of winding lanes with bars and restaurants. 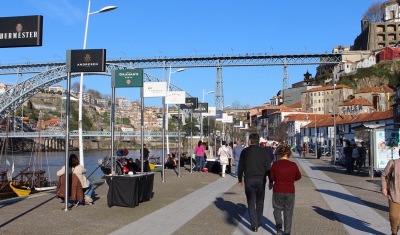 Some of the port lodge flags in Vila Nova de Gaia …. we recognised most of them!

Outside the cathedral – a lovely Manueline Pillory, still with its hooks.

Aah!  No wonder Porto keeps being voted best city destination and is getting very popular. 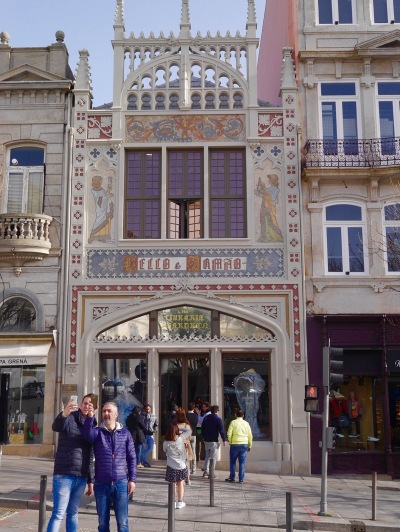 Lello e Irmao bookshop 1906:  apparently it is so popular that there is now an EUR4 entry fee.  It is considered to be one of the most beautiful bookstores in the world.  Our guide told us that there were lots of Porto links with JK Rowling, as she had been briefly married to a local chap here, until his physical abuse drove her back to the UK.  Porto claims that many of the design features for Hogwarts came from the bookshop.  Salazar Slitherin is named after the Dictator. 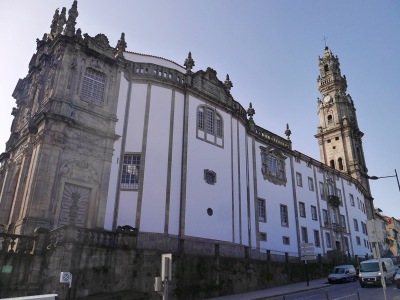 Igreza dos Clerigos … we’d just climbed for an hour to get up here, no need to climb the tower too!

To complete with Lisbon, Porto built the Avenida dos Aliados in early 1900’s.  It has a French Boulevard feeling with some super art deco and art nouveau buildings. 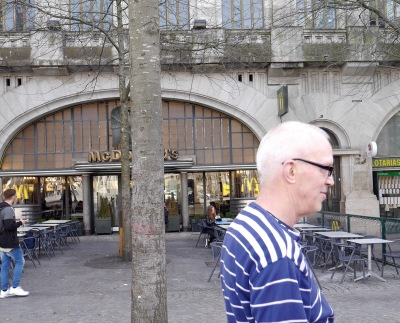 The McDonalds complete with its art deco features … Robert really did not want to be photo’d in front of a McDs!  But he did not purchase, honest!

Sao Bento railway station 1916 and a feast of tiles telling the story of transport and historic scenes.

Transport above, history in blue. 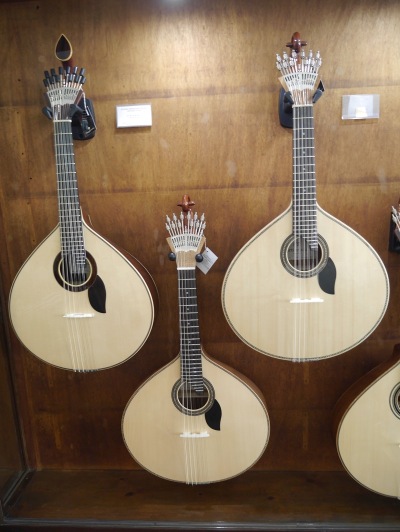 Fado guitars with 10-12 strings.  The Lisbon and Coimbra versions.

Our walking tour took us onto the upper deck of the Ponte Dom Luis – we shared the space with the Metro!  Apparently if gets so crowded in summer that Porto is thinking they will have to encase the pedestrians for their own safety.

View off the bridge looking down onto Vila Nova de Gaia, where all the port lodges are. 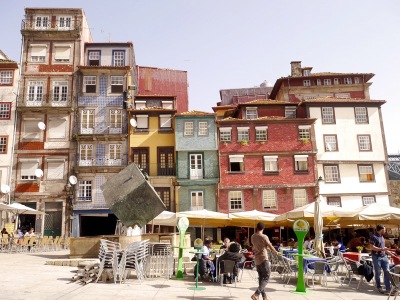 Inside the old town wall.  Isn’t it lunchtime yet?

We went to Barcelos – for the market – well it’s the biggest in Portugal – everything – except meat and fish – which we wanted…  Lots of ‘headed’ chickens (as opposed to headless ones) – Oscar didn’t much fancy the crowds.  Directional signs – to everywhere – except the meat and fish – well, we could probably get meat and fish in London, Paris and Las Vegas – but it wasn’t really convenient, just then…

We has a nice run before market time along the riverside…..

Now, to Braga…and a nice secluded campsite for 2 nights. 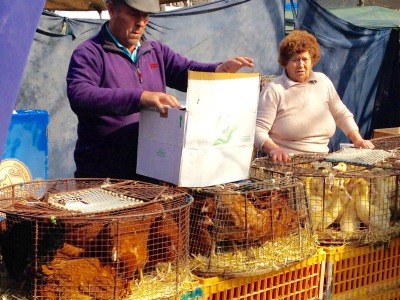 I’ll take two!  Could have picked up some pretty song birds too.

Where next then?  Check out those matching stripes!

It’s Carnival time in Portugal these days – lots of children in lovely outfits on the streets. She wouldn’t sit still, but we spotted a toddler as a little chick, thankfully Not on the way to market.

Sharp-eyed Robert noticed a sign – for a – walking tour (after Porto, he might have learned better) – and we ‘coffee’d’ whilst awaiting the guide. But, the start was actually about 1km away, we observed late….  Olympic-style walk racing was now a priority – with K and O in the vanguard.  Just in time, we greeted Paolo -a young Masters graduate from the city.  A 2 hour tour was promised – and he introduced the history of Braga first – the mixture of Moors, Spanish, Gothic and Manuelian influences…

Saturday – Bom Jesus (“Good Jesus”) – the star attraction of the Braga area. The Stations of the Cross paved the way to a Cathedral on the top of – the most gigantic set of steps. – everything in reflective white.  Visually a huge impact with views of Braga and the surrounding countryside on all sides…

Coffee and ice-cream before descending – to Jez again.

We’d seen aisles of costumes in supermarkets … seriously ALL the children join in.

… with the oldest cathedral – design styles are Romanesque and Manueline, with a Gothic porch. 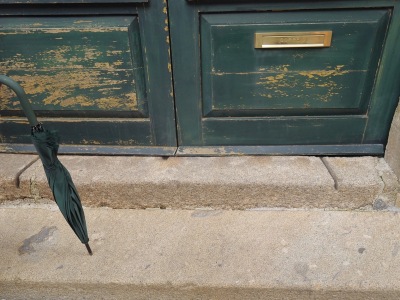 The grooves show where a revolving door used to be – for unwanted babies to be placed in the Monastery. 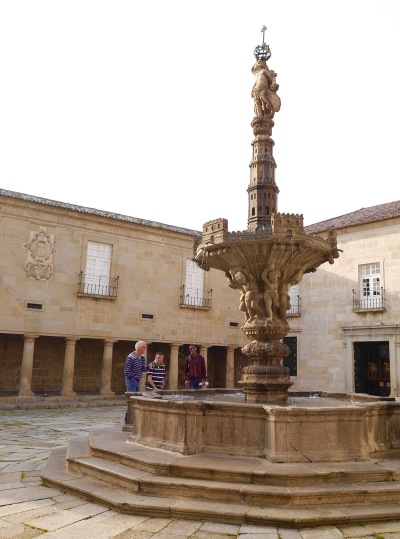 Braga has lots of squares with fountains … can’t remember all the symbolism on this one….

This one has a phoenix who has stabbed her heart with her beak to feed her children.

A marmite building.  I loved the blue tiles and balconies … someone else who shall remain nameless … Robert, thought it was OTT.  The Palacia do Raio now houses the museum. 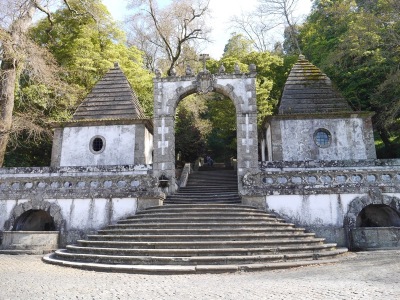 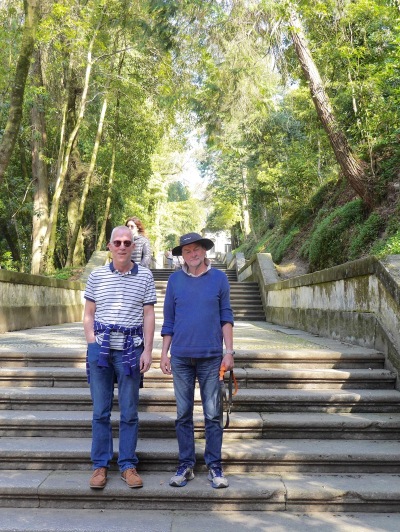 About a third of the way up … there are three sections built at different times.  The lower has 14 chapels with the stations of the cross.  The middle the Five Senses and finally the Three Virtues.  And yes we did feel virtuous!  Especially me as this is my third visit … as a grumbling teen when I could not understand why my parents had not forked out for the funiculare.  And then, it slowly dawned on me that we all came again abut 5 years ago when we were in Portugal to celebrate the Aged P’s 50th wedding anniversary! 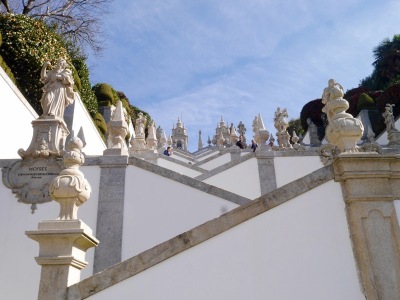 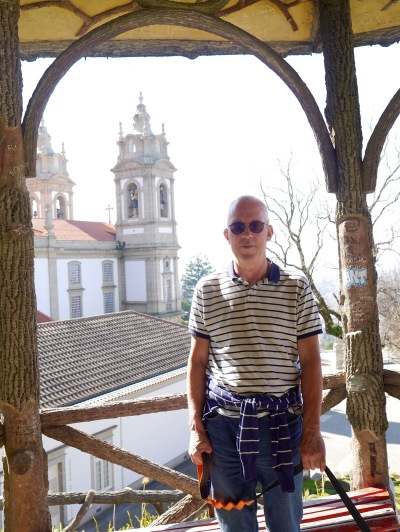 An initial free parking (possibly overnight – with a faint possibility of seeing 6-Nations rugby? The self-appointed parking attendant (Portuguese) greeted us in fluent Yorkshire dialect! He had lived in UK for some years in Yorkshire/Lincolnshire and talked about returning as an ‘illegal’ – what happened to ‘EU free movement of workers across the continent?

The town search for a rugby bar was fruitless – but the wine was good in the square with lots of bars…..  Eventually, K took O back to the van and young Robert and I supped a bit more…

Our ‘Yorkshire’ friend had advised K to move car parks for the overnight – party night and ‘Carnaval’ – wisely, she piloted the van to higher ground and more space – just as R and I arrived back from non-rugby bar – I then followed the game (Ireland v France) by Internet text – a victory for the Irish keeps their Championship hopes alive. To keep the balance, England overcame a spirited Italian side on Sunday – it’s all boiling up nicely indeed… 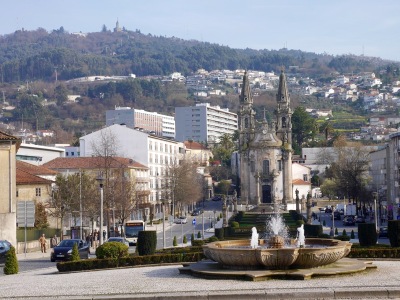 Guimaraes was the first Portuguese capital, when Alfonso Henrique proclaimed himself king in 1139.  It is beautifuly medieval with lots of overhanging buildings and squares.

The cap in the doorway was singing along LOUDLY to his music.  A rather nice red … I managed two before …. 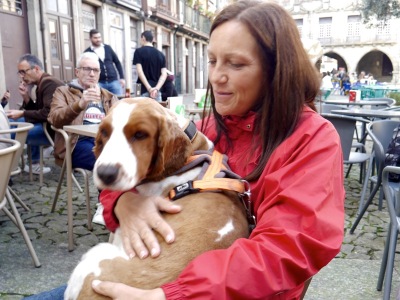 … Oscar and I both felt cold so had to have a cuddle!

On being asked what he fancied seeing next, Robert responded with the Atlantic.  We plotted a route along the Duro to just S of Porto.  We’d planned to stop at a town for late morning coffee but ‘P’ Poor Planning and lack of obvious parking for our big beastie meant we just kept going to Campsite at Parque Seguiresos – plain site – price Eur 16 for 2 nights – 3 peeps and 1 doggo!!!  Plus 10 amp electric, which we managed to blow a couple of times!  OK – plain adequate facilities…. close to the beach for a couple of wet dog walks … K and R!  James, where were you?

Pouring rain, and more teeming rain, and more stair rods of rain for Monday.  Just as it started to abate, we headed off for a farewell good lunch.  Doggy bags of both some starters and mains and no room for pud!

The week with Robert has flown by – nights of Crib with K, all sorts of medium loud rock music from 60s to 80s – especially the Eagles – the last night doing Crosswords – R – you are so sharp especially at anagrams – what’s an anagram of anagram?  Grannymarg?  Mannymarg? Grabagranny?  Over to you, Robert.  And i know he’ll proof read this and find numerous spelling errors and unnecessary explanation marks!