A bit of a summary as we’ve not been blogging!

Ferry from Rosslare – we were a rather late arrival – bow doors opened as if by magic. Next morning, K collected hire car using the nearby Airport hopper bus.  On my actual birthday, we drove to Enniskerry and I had a fantastic full Irish breakfast (first on over 6 months) in the local hotel (where I was barred for too much drinking as a camping young adult) and then walked the Scalp hill/mountain and  collected Kerstin from the airport – then straight to a pub in Bray pub with some family – a good night was had by all…….

Next day (Thursday), we did a walking tour of Dublin city. Kerstin and I toured the Jameson distillery – and tasted their produce – a few times! She liked it with lime and ginger…  The Brazen Head welcomed us for lunch with an outside heater!

Friday – Kerstin went alone to Dublin sightseeing – we stayed by the van and did some jobs – K cooking. Kerstin enjoyed herself so much that she was quite late back – and she is always ‘laid back’!

The excitement is mounting – for the second big party tonight – 70 is only a small number, isn’t it?  Collected salmon from Clondalkin and then to the party house (Delia and Liam’s) in Cabinteely. Food prepping and Oscarwalking… Huge surprise when Sinead and Shane arrived – with Sarah!!!  Out of the blue, completely!   My first ever girlfriend at age 13 – Mary Garrihy (King) travelled all the way from Ennis to be here – we last met 30 years ago but always keep in touch for birthdays.  Blind wine tasting organised by K and K – much mirth ensued.  Not too late to bed – in our Jez on the roadway outside. Oscar was bemused at so many people in our gathering – but huge thanks to everyone for coming along…

Sunday, we cleaned the house – and Liam discovered our Karcher window/surface cleaning tool – we decided to buy one for them as a thank you gift – he’s been cleaning windows ever since – Delia is happy. There’s an old song – “When I’m Cleaning Windows” – Music Hall history.  Back to Camac Valley campsite – and suitably tired – a nanny nap for all, including K9…..  Supper – Bed later for J – K and K stayed up until 2:00 am – playing cards and working their way through wine and Grand Marnier – and my birthday chocolates!!!  K:  We did score them so he knew exactly what he’d missed … we saved him the one we neither of us fancied too!

It might be expensive at EUR27 but Camac Valley Campsite is our Dublin home with large fully serviced pitches. 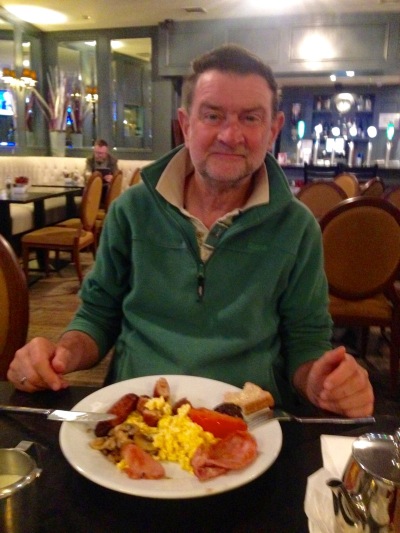 James’ actual birthDAY and started with a full Irish!  Or English or Scottish!

A birthday walk around the Scalp – so named due to the rocks and gorge. 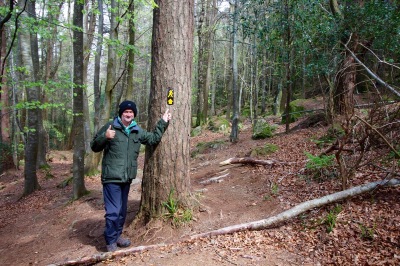 Yes we are on the right path.

I knew about the Sugar Loaf mountain (every country seems to have one), but here there are the Great and Little Sugar Loafs and also a wee Sugarlump!

Meeting up with some of the family in the evening..

A walking day out with Kerstin around Dublin.  The President’s Palace is in Phoenix Park and we saw the cavalcade.

Kerstin was unimpressed with the sheer number of ‘original and best’ tour busses.  She has a thing against the little tourist trains too.  Funnily enough the next day she used the hop on hop off bus which transported her from the campsite and as no-one asked for any money, she managed to get a free tour!

Kerstin and James toured the Jameson’s Distillery … although no distilling is still done here, they enjoyed the tasting.  They were given Jamesons, Johnnie Walker Black Label and Jack Daniels to compare.  A revelation to J – he has always been fond of Black Label, but reckoned Jamesons came out top.

Kerstin decided the best way to drink it was with ginger ale and lime.  Meanwhile … I was freezing my butt off in a outside cafe next-door! 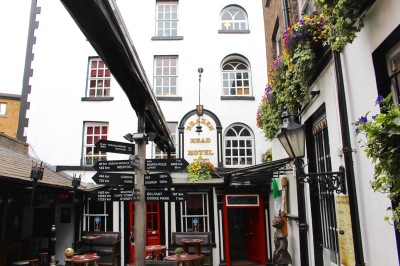 Lunch to warm us up at the well known ancient Brazen Head Inn.

Again outside … Oscar, what we suffer for you!  And you get your own glass!  But they did put the heater on for us and made a fuss of Oscar. 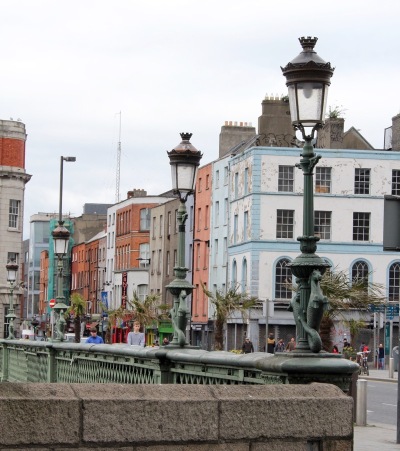 Are we lost?  And still cold? 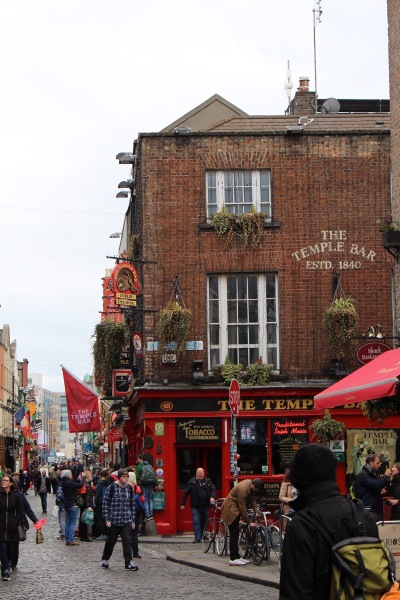 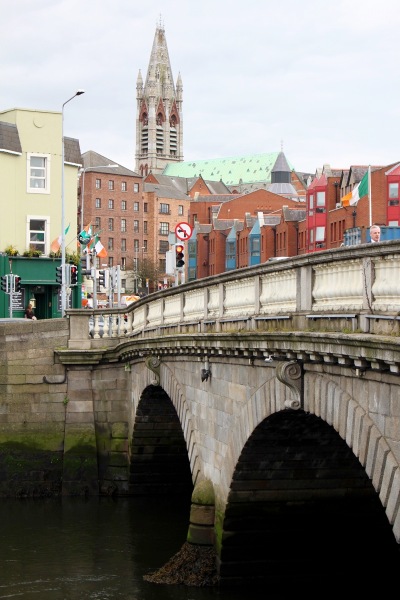 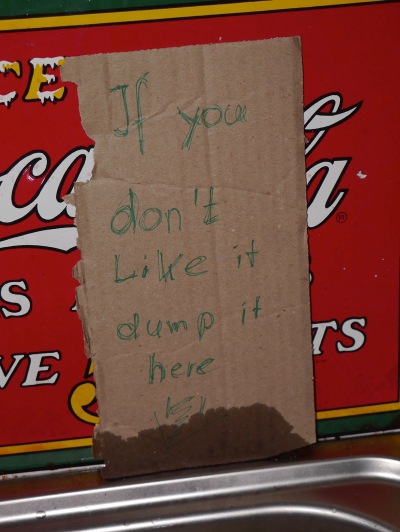 James’ 70th BIG number birthday party in Dublin was held in sister Delia and hubby Liam’s house.  We did a blind wine tasting.  Kerstin placed a sign over the sink!

And she wrapped and labelled all the bottles … I could not have coped without her.

A gift from Stephen and Diedre – S had come across the photo from Tralee in Kerry.  You can just make out the J Clune over the door.  We’ve replaced the glass with perspex, just in case it does fall off the wall!

J’s niece, Mary-Kate supplied the most amazing cake … it had a motorhome and a map of Europe on it – with red dots to show where we have travelled  so far.  Sorry not a large image as my camera died.  Not sure if J is about to praise it, pontificate or weigh it!