We arrived at Magilligan Point for our next wild camping – narrow space to reverse the van – oops!  We just clipped the pub guttering – the kind workman nearby said he would repair it – human kindness, again…

Beach walk – almost deserted – cold wind – O was happy with his usual stick…  Military firing range inland and a Martello Tower – we really did keep Napoleon out!   Pub supper booked at 7:00 … table ready at 7.40 – just had to have a second bottle.  Doesn’t it just irritate you when you point out they’ve left at £15 bottle of wine off the bill and no-one has the grace to say thank you much for pointing it out to them!    But we did manage to watch some of Eurowiddle  Song Contest on tv – winners – Portugal – we raised a glass to them!  Obrigado!

A run in the morning…..   Drove to the Downhill National Trust Estate.  Walk along by dovecot, Mussenden Temple, to Castlerock, and back via Hazlett House (beam structure and same family for centuries) and then Downend House.  The builder, the ‘Earl Bishop’ was very wealthy and liked his mistresses (many), including the mistress of Frederick William of Prussia and Emma Hamilton, mistress of Nelson … they were a busy ladies, and he was a busy man.  Shame about his wife, they became estranged, once they had bred a number of offspring.

The Earl Bishop was the Bishop of Derry  – the most lucrative Irish living given to him by his brother, the Lord Leieutenant of Ireland.  The Lord L. promptly died and the Bishop became the  Earl of Bristol, inheriting the Ickworth Estate in Suffolk.  Yet more money.  Having fallen out with his sone and heir, he left Downed left to his cousin, who had acted as Steward who looked after it … in their family for years.  He sounded a most colourful character.  King George III called him ‘that wicked prelate’.

Ali the coffee stall man at the carpark was a character and we chatted to a couple who came to see him from Derry – they had 3 springers and Oscar was much admired … again! We spent a peaceful but wet night snug in our Jezacarr.

So much colour with the wild flowers.

The dovecot with the ice house under.  The Earl Bishop spared no expense on his estate.  But he spent in the district to support the locals with employment. 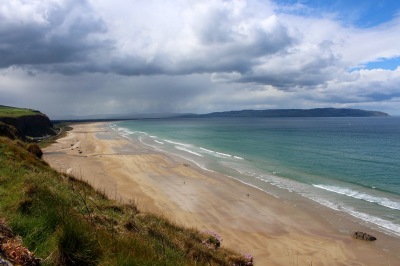 View from the Temple. 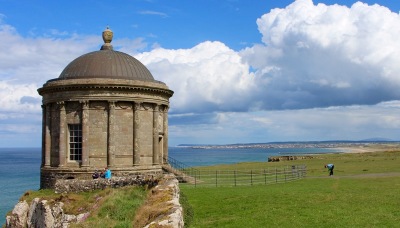 Mussenden temple clinging to the cliff edge.  Built by the Bishop to house his library and his books.  A fire was lit in the basement to keep the books (not his mistress!) warm.  He was for acceptance of all religions and allowed Catholics to have a Mass in the basement.  My sister Clare will attend a wedding here, but not until August 2018 … hopefully it won’t have fallen off the cliff by then!

We debated descending on a minor detour to the lake, built for leisure and to supply the big house with fish.  We were so pleased we did.  It proved to be the highlight … bluebells and wild garlic amongst mossy stones and trees … a heady mix of colour and scent.

We continued along the coastal path to Castlerock.  The railway in bottom follows the coast to Derry … for another SUNNY day.

The big house … built in 1774, burned down in 1851, rebuilt in 1876 and abandoned after WW1 – the farmer who owned it had to remove the roof to avoid property tax and it fell into complete disrepair.

AM – K walked Oscar in pouring rain – wet through to her underwear!  Rainy Coleraine beckoned for mega shopping … B&Q, Pets at Home, Lidl and Saninburys … whew.  But K delighted to purchase preserved lemon, she’s seen a recipe somewhere!  Walked around Mount Sandel-fort – the rain has brought the vegetation on hugely – immense shades of green….  A nice lady recommended beach walk at Portstewart just along the coast.   Our overnight was by the river with a Victorian salmon leap.

View from the Fort of the carpark on the opposite bank where we overnighted.

K and O walked early in the nearby woods. K phoned the TIC for Jezparking – parked close to town and beach. Town, promenade walk – coffee – and – guess what?  Another lovely beachwalk!  Following the end of the NorthWest 200 motorbike races, the hospitality tents and fencing were being removed.  It is obviously quite an event.

Whilst at Camac Valley in Dublin, a lady had recommended a campsite in Bushmills –  our next location – (not just for the whiskey). The site is Ballyness and is a real gem – manicured and whitewashed with immaculate lawns and pitches!  Great music playing in the sanitary block, including Tom Jones and Abba … great to dance in the shower to!  Oh, and underfloor heating!  BBQ in the evening – not fire log though as too many people around… 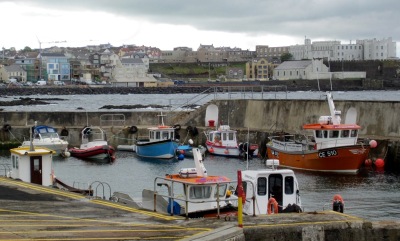 Easy walking around the bottom of cliff….

We drove on along the coast stopping at a view point of Dunluce Castle.

I ran early from our pitch – I’ve been trying to practice slower running to build stamina before speedework – and it is working. K did her Pilates. I did my regular Khairdying and it was a success, thankfully. K:  so thankful to loose the skunk stripe in the middle of my head!  We walked to the town for the distillery (oldest in the world) tour – a bit disappointing with some lack of detail, family background, etc. But, we both tasted – and I drank my old favourite – Black Bush!  At least the distillery is still producing, unlike Jamesons and Smihwicks.   In fact, it was bought by a Mexican Tecilla company and the plans are to double production.  Town walk with lots of boarded up shops.  We stopped at a bar for another glass  .. very limited choice, so K chose port, having spied a bottle lurking in the corner … think the barman may have wanted to get rid of the bottle as it was huge!

An early bus to the Carrick a Rede rope bridge. Suspended 100 feet above the gorge – I went first and almost turned back when I saw the sheer drop – narrow rope bridge – trying not to think of “Galloping Gerty”as I crossed gingerly!   A quick look at the island and back to the mainland – scariest thing I have done for yonks!  K breezed it, naturally.  She saw the Kittiwakes nesting.  So many tourists there, Asian and American mostly.  We must have been asked about 20 times if ) had crossed the bridge … no not allowed and he would not have liked it anyway!  The Giants Causeway is Northern Ireland’s most visited tourist attraction – no wonder!  Read Oscar’s report below – I won’t steal his thunder…

Walked for 2 hours to White Park Bay – fabulous rock formations and slippery seaweed….  I photographed a very ‘nimble” cumulous. Then the Causeway Rambler bust to the Giant’s Causeway … when asked where to by the driver, K instantly responded Cribs Causeway … a shopping mecca in Bristol! Again so many people here.  A little know fact is that the National Trust try to get you to walk through their multi million pond visitor centre and charge £5.50 for the privilege, but the actual Causeway is owned by ??? Heritage and is free … just go through the arch!  Sneakily there are signs up stung your ticket will be checked on exit … by whom exactly?

A quick pub visit and then – bus home via Causeway Rambler. Oscar was knackered and I wasn’t far behind – another BBQ and the end of another great day out. Due to pressure of booking , we had to move pitches to the lakeside – with swans and ducks…. 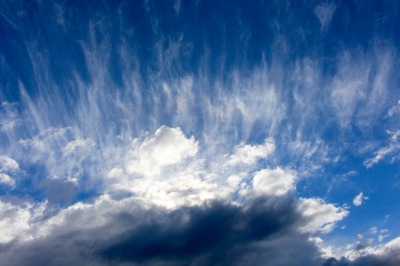 Everything today was determined to be stunningly beautiful.

The bridge was built every summer for local salmon fisherman who stretched nets from the point of the island. 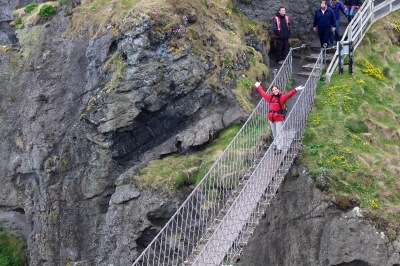 No apologies – so many pix. 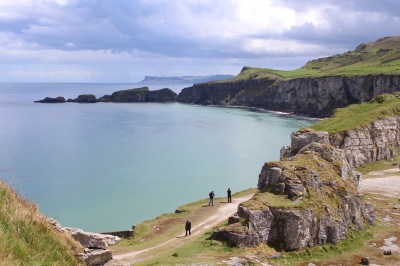 People atop this one.

The shack was once a Youth Hostel on White Park Bay, but had to shut due to vandalism :(.  Would have been an amazing place to stay.  But with Jez we’ve no need of it’s like. 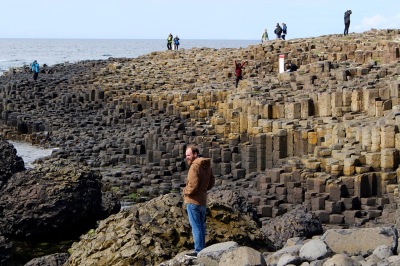 Giant’s Causeway.  National Trust at the top would charge you £10.50 to walk through their visitor centre, but you can avoid this and walk freely, as the actual site is managed by ?? Heritage.  The most visited attraction in Northern Ireland … and everyone was here!  I’d been told I would find it disappointing … but I didn’t … just wish fewer people.

Hi there – avid readers – all 9 of you – but, who’s counting?  Now my owners ( beautiful people – for Muggles – Potterspeak, again) – like innov8. They call it “CPD” -“Contiguous Processional Devilment”!    Sometimes it works and other times – well, let’s say – it’s a good effort.  They have given me “Kongs” – a basic ball filled with frozen sardines… They forgot to measure the circumference of my tongue!  I cannot get the little feckers out – so they spoon it for me – why not put the nice fisywishys on a plate, for heavens sake!

They took me to this place called “The Giants Pawsway” – well, the Giant’s dog had huge paws to walk  all the way to Scotland on the giant rocks… No facilities for dogs – why?  20 people stopped to ask if I had crossed the Bridge – many Oriental folk got me to pose for photos – obviously for the Hong Kong Spaniel Corporation!   With all this wet weather – at least K and J are letting my fur grow.

But no more sardyKongs, please?

They tell me I will see Boppy and Poo soon – Yippee!  And of course Shags and Mags, too… Maybe Kensey also in the summer – I am a truly pampered pooch – life is good here at Jez Holiday Home…

Hidey Ho, then for now….