Collecting the emergency laundry, we turned the van into a mobile dryer.  Farewell briefly to M&S as we shall see them in about 2 weeks at a motorhome meet in Brin, near Inverness.

We headed for Mallaig to catch the ferry to Armadale in Skye.  We could’ve taken the free bridge but it would have been a 3 hour detour instead of a 15 minute jaunt down the road.  Fortunately someone on the site had warned me that they had been turned away from the ferry as fully booked for that day, so I’d pre-booked our crossings to Harris too.  We arrived too early, so parked up and wandered into the small supermarket and a second hand book shop … always a lure.

On the ferry, which was similar to those in Norway, where you can stay in your vehicle, I was able to catch up a little on some shut eye … having not fallen into a fitful sleep until 4.00 the night before.  Poor Oscar had been ill numerous times and kept prowling trying to get comfortable.  Lucky James slept through it all! 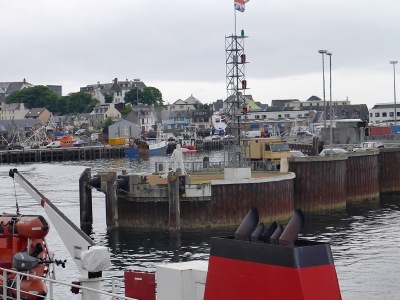 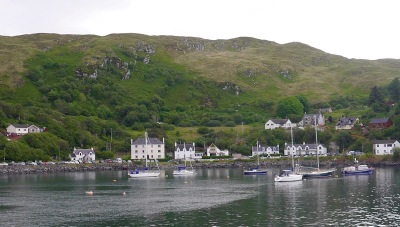 I had visited Skye a hundred years ago with a boyfriend.  British Rail had a February offer – for £10 you could travel anywhere.  Mark and I thought of the furthest place we could get to for a long weekend and trained overnight to Fort William and onto Skye.  All I remember was that we saw people camping … in snow.

We stopped at Talisker Whisky Distillery … a small site with small parking.  Jez straddled the pavement whilst J went in and purchased the last two tickets for today at 3.45.  Having recently been to Bushmills Distillery (and J to Jamesons) in Ireland, we pretty much knew the process, but it was very interesting to taste the effect of peat smoke drying the barley.  The Talisker had a definite peaty pong and taste.  Good though, that production still takes place here and at full capacity.

Still being shattered, we parked up in a lay-by with another 4 vans and James cooked, washed up and walked Oscar.  I was in bed by 8.30! 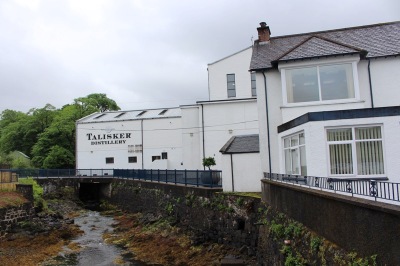 Our ferry to Tarbert on Harris was not due till 2.00, so we stopped off at Portree, the main Skye Town.  It is given over to tourism with craft and gift shops, but we managed to buy what we wanted … meat for the freezer, a capo (thingumybob for the guitar) and some surgical spirit to harden up …. J’s fingers!  This ferry was more like a small English Channel ferry … you could not stay in your vehicle, BUT there are dog friendly zones inside and on deck.  So Oscar got to come too.

A fellow motorhomer gave us some great advice about Harris and Lewis and told us about a great beach with overnight parking not far from where we headed … so a slight detour and yes the beach at Luskentyre is truly magnificent.

View down to the firth where we are headed …

… and we’re not the only ones.

Luskentyre Beach stretched for miles and changed colour in the estuary as the tide ebbed.

K ran on the firm sand of the beach whilst J preferred the hilly tarmac road.  A slow start on such a beautiful environment … eventually we headed into Tarbert – the only TIC on Harris.  A really helpful lady … she told me where all the Harris Trust free / wild overnight parkings are (you are requested to donate £5 to the Trust), where all the campsites are and which have chemical toilet facilities.  She advised me to book campsites for emptying our black and grey waste as they only provide these facilities for resident motorhomers and not all campsites have black waste services.  With all the lovely spots she recommended, we have again come to the woeful conclusion that we are NOT going to be able to take it too easy and we will not see everything.  So we headed not too far to Tarbert to a viewpoint she recommended with views over the island of Scalpay and the ferry into Tarbert.  Room for one large motorhome … US, picnic tables, views and a bin :).

So a planning afternoon ensued and campsites booked … mobile and phone signal here as we were close to a mast.  Supper was partly Margaret inspired and partly a fellow blogger inspired, as both had slow cooked beef.  I tend to avoid beef as I find it chewy, but slow cooked it is so tender, so I pressure cooked a cheap topside joint … beats roasting which turns it to shoe leather – scummy with enough to last 3-4 meals.

Our bench and table – perfect for views and an Oscar kiss.

The other direction and you can just make the arrival of 4.00 Calmac Uig – Skye ferry.

We had been warned that everything closes on the Sabbath.  You are even requested not to hand out washing and children’ playgrounds have signs requesting that they are not used.  I’m not religious, but I do like the marking of the end and start of a week, although here may be a tad too restrictive.

Knowing all the visitor attractions would be closed, we headed for Hushinish Beach, which a few people had recommended.  We had been told that although the road was only 14 miles, it would take 45 minutes … I didn’t fancy facing too much oncoming traffic, despite the numerous passing places, so we set off at 8.45.  it was a little hairy in places as it was literally van width with the ground sloping away from the tarmac.  As I drove, I had to be mindful of the long wheel base and where the rear wheels would follow!  Our new Bradt Outer Hebrides (liking the Bradt format and have just ordered some used ones from eBay for our Autumn Balkans trip :)) guide book states ‘the road twists and turns simultaneously’ and ‘this feels like the road to nowhere, the kind you might expect to encounter at the bottom of Patagonia’.  Quite!

Along the route, we missed the old Norwegian Whaling station … will look out for the tower on the return.  Lord Leverhulme, Unilever money, invested heavily in Lewis and Harris.  He bought the old whaling station with ‘the well intentioned plans to create employment.  Although machinery was overhauled in 1923 and three new vessels purchased to catch whales in the Atlantic, the scheme haemorrhaged money.  This was due to Lord Leverhulme’s unusual business plan: he intended to produce oil but, turning his eye to the traditional smokers of the islands, mused on whether smoked whale meat and whale sausages could be exported to the interior of Africa.’  Wonder why this business concept failed!

We also passed what is claimed to be the world’s most remote tennis court!  And Amhuinnsuidhe Castle.  Built by the Earl of Dunmore in 1868 after several people commented on his modest dwelling at Rodel.  I wonder how he reacted to his son’s finance who claimed his house was smaller than her father’s stables!  I am really liking this guide book for these little snippets.

Amhuinnsuidhe Castle, with Jezn’belle, who travel with us.  The road crosses right in front of the castle, now a hotel  Apparently, no locks on each room on a point of principle, and dinner is a 3 course set meal with all the residents on one long table.

Another ‘where we are headed’ shot.

You don’t mess with those horns, so I took it mega slowly.

Breakfast on arrival and then we set off on a walk to beach described as one of the most beautiful and remote (another theme here), but along with several other walking parties, missed a turn and found another stunning beach.  Ho hum, it was a fair old clamber and slither up and down, with some cliff edges, but we only got one drenching.  On the return J had his inspired perspiration … had we any cream on board?  An Irish Coffee?  Oh yes!

The island in the background is Scarp and was inhabited until 1971.  Whilst the water width is only 400 metres, it can be very rough and the island can be cut off for days.  A story goes (this great guide book again) that in ‘late December 1934 .. a woman pregnant with twins went into extended labour.  An 85 year-old midwife delivered the first of the babies but insisted the mother be ferried across high seas to the mainland to deliver the second twin.  She was driven to Tarbert and onto Stornoway.  She finally gave birth to the second twin two days later, on a different island, and in a different year’.

Another snippet about the island … ‘Gerhardt Zucher, a German rocket scientist, had persuaded the British government to fund a research project to deliver mail … to the island.  The plan was to attach mail to a rocket and launch it across the waters … in July 1934, a rocket stuffed with thousands of letter marked ‘Western Isles Rocket Post’ spectacularly failed to deliver, exploding at the first attempt … The British Government then deported him to Germany, deeming him a ‘threat to the income of the Post Office and security of the country.’ 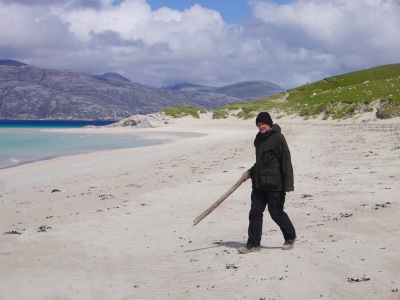 Look, what a big one!

Well, are you gonna throw it or what? 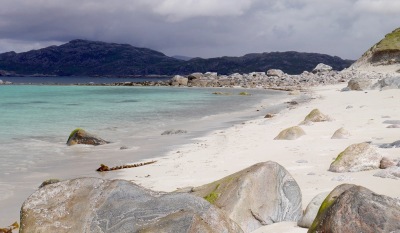 We left Hersinuih – one of the best ‘wildings’ – do we know any other kind? No. Back on the ‘hairy’ road which didn’t seem so scary the second time – still took 45 minutes for 14 miles, though… on to Tolsta and the “Bridge to Nowhere” – Lord Leverhhulme built a bridge too far. But stout reinforced concrete in 1925 – maybe BS 5400 wasn’t around then – oh dear, work sneaking in – “out damn spot, at once”!   The museum was shut, so on to the Laxendale campsite – for some unexpected ‘fingerprince’ – more of that anon…

The traffic jam on the way out … a whole family, who would not move.  J got out and braving risked a goring by waving his arms about … not budging!  Only the horn finally induced a sedentary bovine move.

All that remains of the whaling station … we spotted it on the return.

The Lewis Moors dropping into the sea … prone to wind!

The Bridge to Nowhere.

The view from the Bridge.