Our very wet and windy cycle ride took us through the photos (like Harry Potter, again) to the ‘booked’ lunch venue.  November is Istria’s Agrotourism month when the farms/ restaurants throw open their doors to display/present/sell their local wares.  The lovely campsite lady had booked us in with one that her friends used and raved amount   We suspected we were in for a gastro treat.  It looked very quiet – but we welcomed the stop – looking forward to getting changed and some wine – we were completely drenched through and quite cold, now. The owner appeared and said “chiuso”!  Our Italian is sufficient to know – “closed”!  We reckoned the owner had accepted our reservation of 2 days ago, hoping to get more and when that didn’t happen – decided to ‘close’.  His establishment has received the appropriate Tripadvisor negative review…

Pedalling furiously – wet doesn’t even describe it – we arrived back at Jez – dried off – and launched a targetted attack on the Gluwein – it warmed our bones through. The afternoon and evening sort of blended together in a soft mist of….amber nectar…..   (K:  I imbibed most of the Gluwein, must have been wetter!, ate and promptly passed out.  I awoke early evening slightly shame faced and time discomfobulated!)

Fazana – our first stop.  The Os-car Convoy stopped to admire the Church of SS Cosmas and Damian – we couldn’t see the Italian frescos as the interior was being repaired.  The car in front was the works van.  Professionals? 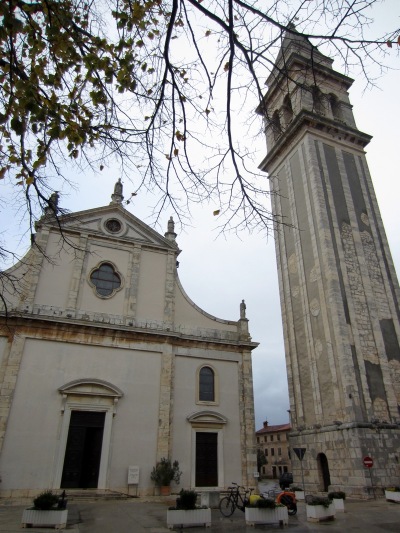 Vodnjan:  arrived at through vinyards and olive groves, according to the guide books.  We didn’t notice as our heads were down as we powered up hill against the wind and rain.  On arrival I said to J that I’d had to invoke Sport (mid power assist) to get there … he gave me a wry grin … think he was in full Pleasure mode (full assist!).

Sadly !!! the church was shut or we could have viewed the 6 mummies of saints – miraculously not decomposed and on display!  Tallest Campanile in Istria … J referred to it as a Trampoline … not one I want to jump off.

An hour before our lunch booking, so what were we supposed to do as the heavens opened again? Answer … a lovely bar in the main square.  When the owner brought out our glasses of wine, he also provided cushions for us to sit on.  The wind had got up and was spinning one of the roof fans … we really didn’t need more of a draught!

Morning time, we put our stormy misadventure lunch booking behind us and left the deserted (almost) Brioni campsite behind us….good value at Euro16 per night including lecky…

A destination with stops on the way .. Svetincenat for coffee.  amazingly everyone was smoking in the bar.  EU regs?!  Pazin was shabby and most of the building exteriors looked crumbling, but may have been super smart inside.

The nearby fortified hill towns journey was aborted – dodgy roads –

Nightfall – and Optijla – small car park but perfectly adequate – our first ‘illegal’ wild camping in Croatia – but it was in one of the Apps.  It was fine and quiet – rain beat down during the night but not too heavy.  K walked with O and discovered the seaside pleasures (and found an ice-cream – so predictable) ….. I rested my brain.

Stop No. 1:  Svetvincenat.  A walled village with a fort.  The main square is considered one of the most beautiful in Istria. 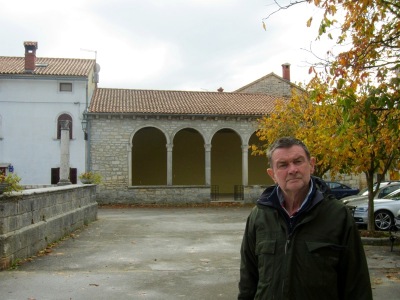 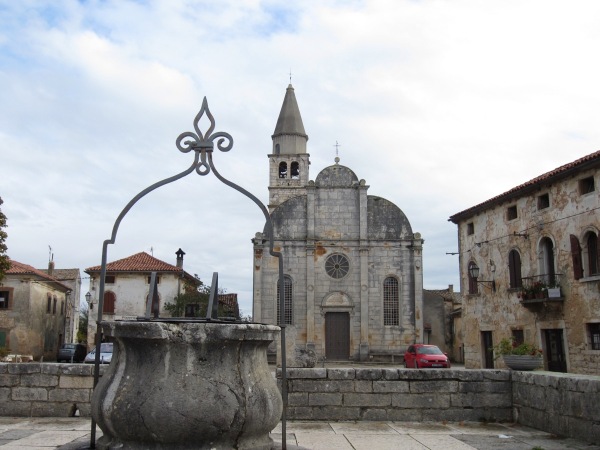 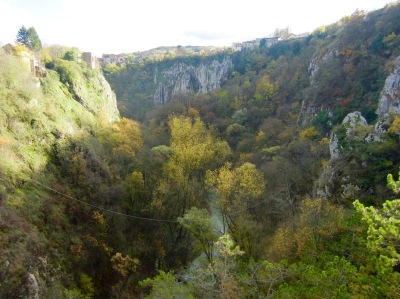 Stop no. 2”  Pazin.  A fort stands on the edge of a cliff.  We wanted to see the cliff … 130m high and falling away to an abyss called Pazinska Jama.  The river disappears under the town.  It inspired Dante’s Inferno … sure you’ve read it … it is the bit where he describes the the Gateway to Hell.  Jules Verne also used it to describe a character who disappeared down the waterway … not that anyone has managed this in real life!

Sadly the zipwire … 2 of them!  were not operating.  We would both have been first in the queue!  Don’t fancy buying a house perched on the edge either! 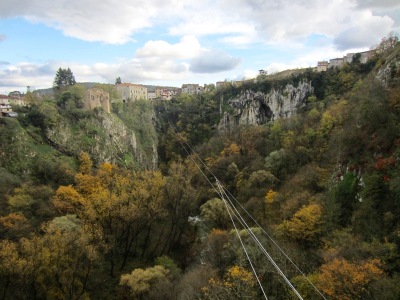 Resting Stop:  Opatija: guide book described as faded, but I loved it.  An upmarket Eastbourne.  Tourism began around 1847 when the Austrian empress Maria Anna stayed here and set a trend.  Luxury hotels, houses and courts sprung up.  Emperor Franz Joseph escaped to the milder climate until he was assassinated.  Now it is still got life once the season is over with a reputation for good restaurants.  An older clientele, but smart … we fit in an all counts … NOT!

This chap was the first fisherman to reinvent himself as a tour guide in the original small harbour.

Lovely statues along the front.  And you can walk for several km along pedestrianised walkways. 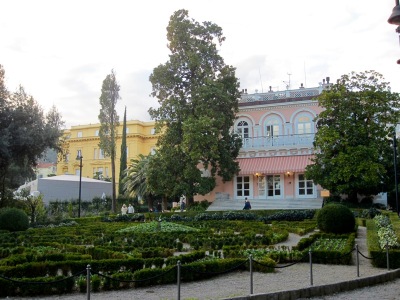 One of the original palaces. Near an open air theatre.  A poster advertised daily/nightly music events.  Definitely a good place to over winter. 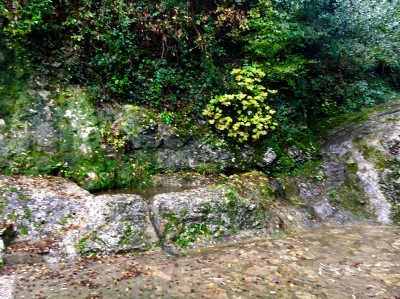 Just along from our parking – water jutted from various holes in the rocks and has been used since the area was inhabited for clothes washing.  I’d not have found this unless dog walking … Oscar, you have your uses!

The scenery along that coast was improving as we headed to bear country – puns on ‘bears’ and ‘bare’ abound – after all, we have just come from ‘bare’ territory – naturist land!  For those of you nudists amongst our readers – what is a ’textile’?  Come on, now – you must know… Ok, none of you wants to admit to ‘bearing’ all in Almondsbury, or Ash Vale (!).  It’s a person wearing (bearing) clothes whom you meet whilst nude in Killiney or Magsshagsville…..  Now, we’ll put our clothes back on to write further nonsense.  The bears were – cuddly – Paddington-esque and very playful – but the fence separated K from them – otherwise she would have been in like a shot – ‘does my bear b**m look big in this’?  No comment… 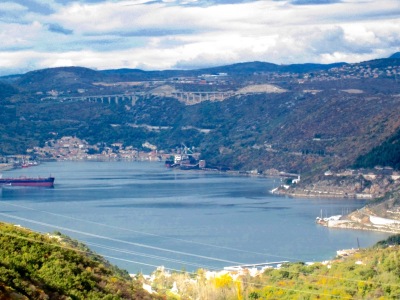 As we turned the head of the water between Istria and Dalmatia, the scenery got altogether more interesting.  Failing to understand why coastal Istria is so popular.

Our still sopping shoes drying on the dashboard – we had puddles in them after our last wet bike ride.

In search of the Brown Bear.  The sanctuary is in the village … the sign in front of a communal well. 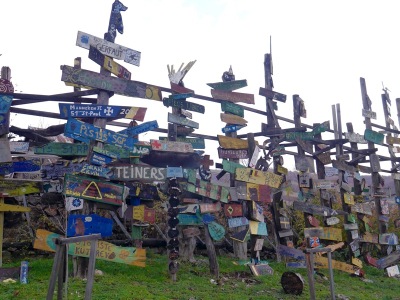 One chap started the sanctuary in 2001.  5 volunteers now, but 50 odd in the summer! We had the place to ourselves.  we were told we were really lucky to have seen all of them and even more so, to have seen some playing.

I think the film Paddington 2 is out.  He must have been modelled on this variety … cute or what. 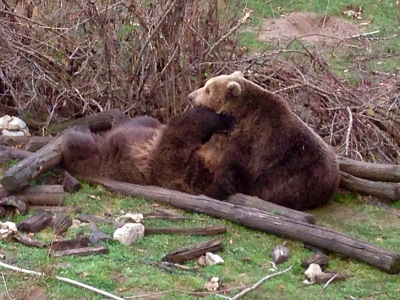 Ok, I don’t know much Croatian – except ‘Dobredan’ and ‘Hvala’ – work it out out, readers….. Use Vooglekranslate if you must.. K found an App (unusual?) where you point your thingy at a text and it translates for you… Personally, I point my thingy at young ladyK9s, when I can… not much success lately, though..  Kinsey, wakeup please.

Now, my owners have implemented a new regime for me – with no prior notice! According to my NATO (North Adriatic Trust Oscar) affiliation, I am required to be served with at least 30 days notice, in biting/writing…. Ok – it started with K saying “Oscar – boundary” – she laid my blanket on the floor with this saying. I looked at her and thought (I know that word – I’ve played cricket for Wales – at the WorldKup in StrangKlevania – we lost to Iceland – like England in football) – and ran for the line, turned to see my 4 runs posted on the scoreboard. But no it wasn’t cricket – she wanted me to sit on that silly rug and wait… Ok, let’s humour the young lady – I got some treats – and then she hollered ‘break’ – so I wondered – am I out LBW? (I bet she knows a bit about ‘leg over wicket’) – keep it clean, Oscar.   It goes on and on – they say it’s about establishing boundaries and limits!  I don’t impose any limits on them, dammit all.  And my rations have been cut in half –  ok, I get the rest over the day….  This is not demoKracy – it’s plain bearassed har-ass-ment.

Yours in puzzlement, but basikally – very happy….