We completed our services and took the short drive to Igoumentisa port. A long wait of 3 hours….  Some trucks reversing – all over the place (health and safety – but it all works in an Italian beautifully organised disorganised way – bellissimo!.  Where do they put them all?  Ah .. two levels.  Loaded last as first off, most vehicles going onto Patra … we turned around on top deck.  Lots of areas on board closed as not enough passengers … self service restaurant shut till 7.00 p.m. … K had bought a cold supper as we’d been told the food is expensive and not marvellous … so we sat in the cabin and ate that as a late lunch,  fortunately we did not need supper.  Would have been complicated anyway – we’d either have had to eat taking it in turns or leave Oscar alone in the cabin – as we know from the howls that another couple did!   Coffee EUR2.50 each – not paid that since Nice area!

Oscar pooped on the poop deck!  So proud!

Nanny nap, research on Greece, showers (hot and forceful, but didn’t drop the soap – just as well as no room to pick it up!) more wine — bed in stuffy room. 18 hour crossing……………. successfully completed.

May not be a cruise ship despite the name … Cruise Olympia, but significantly better than the Helsinki-St Petersburgh ship.

The same free-for-all disembarking.  Straight onto A2 motorway – brand new with EU money – that route or our destination would have been very wiggly … toll £5.30 for not very far … will need to check roads out – can we do non motorway?  Anyway, we are in Greece – my first time (and Oscar’s) but K was here 30 years ago…..

Dodani … holy oak tree – revered by frenzied priestess and priests, they slept on their floors and didn’t wash their feet!  The Romans chopped the tree down and built temples and an amphitheatre.

Another nanny nap in the car park as sleep was not great on the Adriatic/Aegean Sea. Good ruins but we always think of Sicilia/Italia as the best – but we will see loads more in Greece.

We drove in the afternoon up the hill to a viewpoint/official motorhome free parking overnight – spectacular views down over the lake…..

Our first Roman amphitheatre in Greece.

Originally a Greek site, rebuilt with lots of Roman Temples. 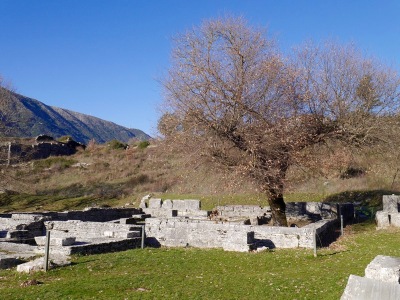 The original Oak was cut down … the Oracle Priestess would receive slates with questions such as ‘Are my wife’s children mine?”  She would listen to the bottles suspended from the branches that magnified the rustle of leaves and pronounce her answer.  Not sure how she worked in winter when the leaves dropped. 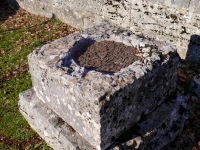 … but people obviously still hope it will bring luck and chucked very low value coins in.

Used to be another 10m on top and seat about 17,000 making it one of the largest in Greece.

Another Oak waiting for the performance to start.

J on role reversal … pulling every which way and cocking his leg.  We’re still working on J being the Boss!

Our walk along the lake to the historic town of Iaonnina.

Two mosques still in the old town castle, which was the base of Ali Pasha who essentially ruled a massive area as a fiefdom.  This one was the Aslan Pasha mosque 1611 and now municipal museum.  Next door was a Muslim seminary, where Ali Pasha attempted to rate his son’s mistress. For refusing the tyrant’s advances, she was bound, weighted and thrown into the lake with 17 of her companions.  He also executed a rebel in public by smashing his bones with a sledge hammer.  Nice chap!  A young Lord Byron visited Ali Pasha in 1809, Ali Pasha took rather a shine to Byron… sexual? … as he was taken with Byron’s small ears – a sign of high breeding!

Inside the Alslan Pasha Mosque.

Two dishes of the day … lamb stewed with potatoes (falling off the bone) and lamb with fresh tomatoes in a filo parcel served with a rocket, sun dried tom and balsamic salad … with 500cl of local regional wine … £22 with tip.  We’re so going to love these prices … means we can eat out more.

The wrought iron to the left of the mosque is Ali Pasha and his wife’s grave.  I’d hoped to see the Silverware Museum in one of the Castle’s building, but it shut earlier than advertised. 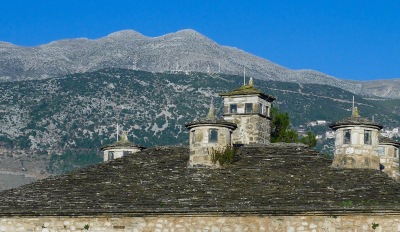 So still – an almost perfect reflection.

We moved Jez down to the lake side and we cycled 26 km around the lake. Two packs of dogs chased us but they couldn’t work out where Oscar was (concealed in his Os-car).  He went very quiet at all the barking.

Monastery of Dhourahani – very smart and cared for … run as a vocational school for disadvantaged children.  The Churches have lots of paintings of saints, but are very dark.

The obligatory coffee en route…trays of meat and pots ready for the standard late Greek lunchtime (2-3:00 pm).  We’d have stopped as it looked good, but it was only 12.00 and not sure how long we’f be salivating.  We lunched in Ianonnina, more excellent value – and our first Moussaka.

Drove to Metsovo for night stay … very cold … checked weather – one app said snow overnight… risk averse …then drove an hour back down the mountainside … lake side pitch, not far from the monastery – our first ‘wild camping’ in Greece. After only 2 days, we have a good feeling for Greece – like we experienced in Italy. Roll on the next few months. Oscar likes it too – although he doesn’t know which country he’s in – he’s in HappyK9ville, always!

Our morning view of the lake … it’s been filled in by mist. 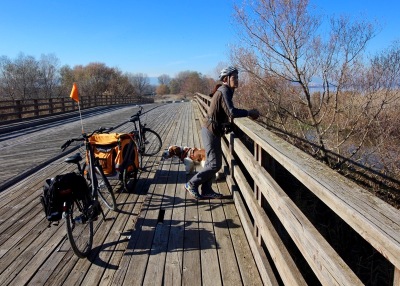