At 9:30 am (early or what?), we embarked on what would be a 10k walk steeply up and down along the gorge. Oscar ‘em barked his way too….but his ‘em barking settles when we’re underway.  We followed a path carved by the monks for their donkeys hundreds of years ago – still droppings on the way so it’s still used to transport stuff to the monasteries.  After a short time, we came to the Prodhromou Monastery – literally clinging to the steep cliffs – it looked almost as if the rock had been carved to accommodate the structures. I went in and viewed the kooky stairways and rooms – very quiet and definitely contemplative.  On we went down and up and the other way around – past rushing streams – while Oscar bashed our legs with his usual selection of sticks!  The Monastery of Nea Filosoou was more modern and we entered the courtyard to be greeted by a charming monk who gave us water and Turkish Delight sweets!  We’ve since herd that the Greeks don’t call it Turkish Delight, but just Delight!   It was necessary to tie O up in the yard – he vocally made his objections clear…  The chapel is lovely and small.. Only 2 monks live there – our host had been in residence for 8 years.   Super frescoes.
Back retracing our footsteps and down to the actual gorge itself. Ancient Gortys nestled at the bottom. I nestled my feet as this septuagenarian was feeling slightly tired – age related?
Back up again to the original path and after only (?) 3.5 hours – to good old Jez….. my feet took a direction in the door, past the executive bathroom and into the royal bedchamber where they forced me to recline….  But a stunning day – excellent walking and views to die for…..
Same overnightly – and even more quiet than last night………

Hard to see, but there is a chapel on the right and another on the left of the gorge, so our walk will go down and then up … and then in reverse!  Demitsana nestles at the head of the gorge. 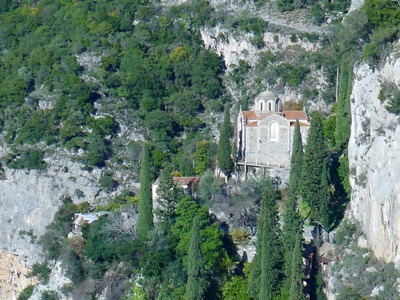 Zoom lens to see the chapel at the right hand Monastery of Prodhromou C12. 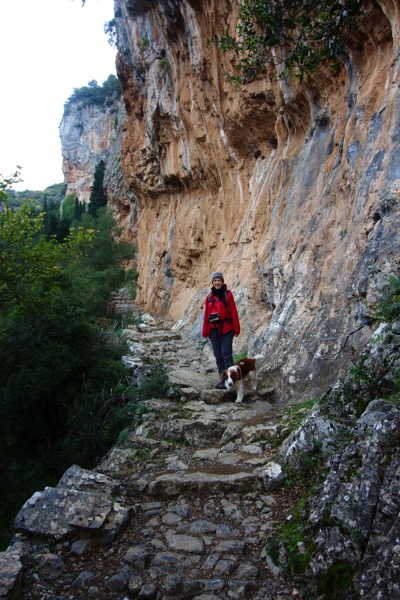 Part of the easier donkey path, carved out by the monks. 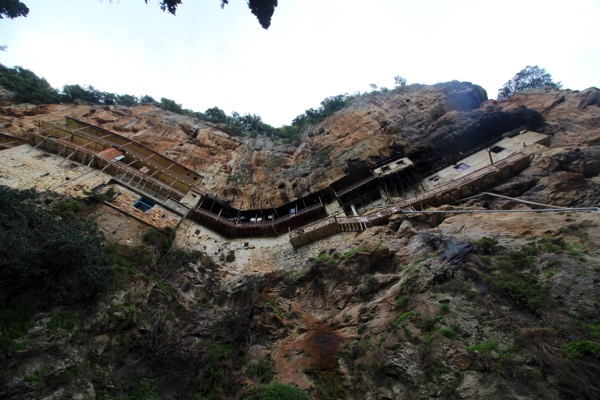 Wow, turn a corner and this is the Monastery with living accommodation … all clinging to the cliff. 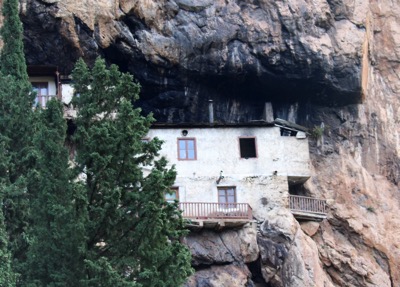 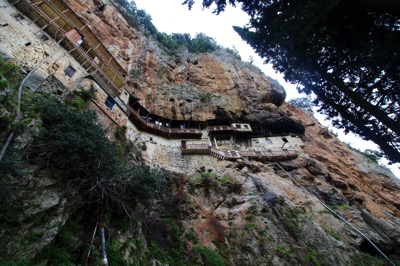 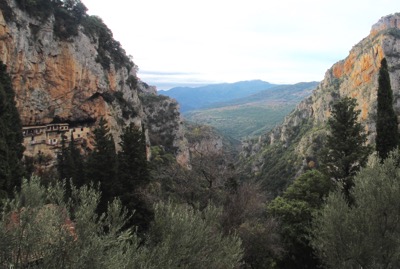 Looking back at the Monastery of Prodhromou. 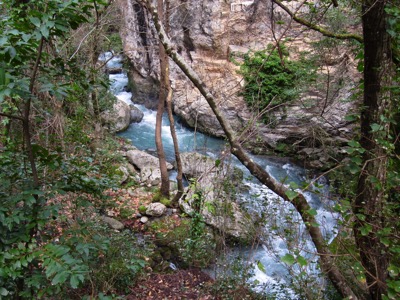 The gorge is 300m deep and the water powered around rocks. 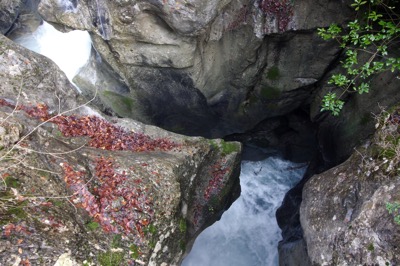 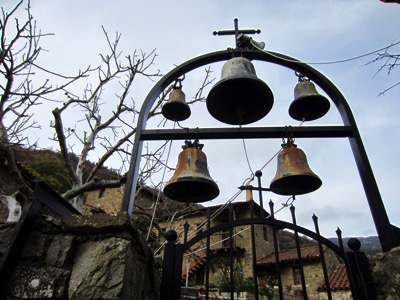 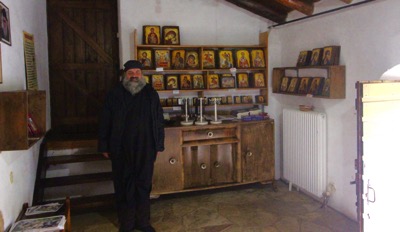 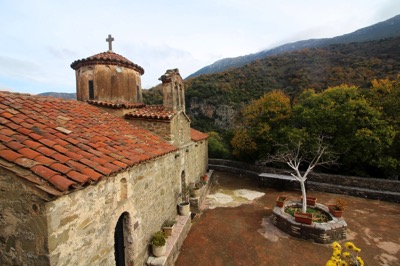 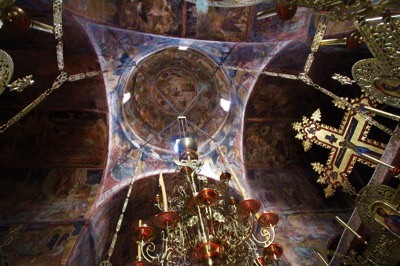 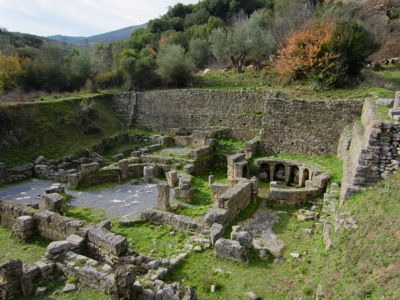 Ancient Gortys at the other end of our gorge walk.  Temple to Asklepios God of Healing, a therapeutic centre, from 4BC. 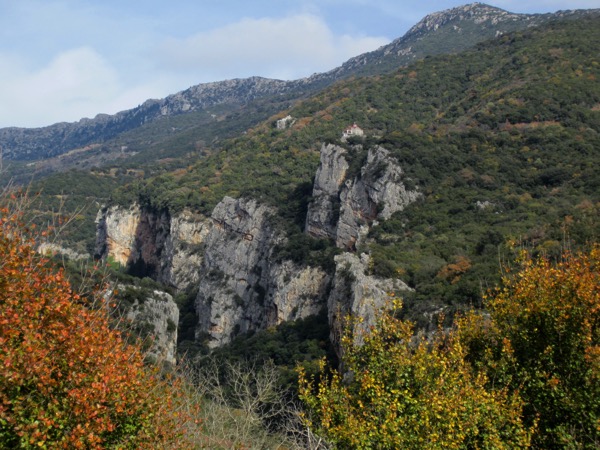 Taken from Ancient Gortys … can just make out the church where Jez is parked.
950 – Tuesday 9th January:  Back to Kaiafa Springs With a Purpose!
Back up the hill from Lousois Gorge – the nightly darkest pitch we’ve ever stayed at……lots of clear stars overhead.  Powered to Dimitsana Water Power Museum – open all days – except Tuesday!  But their car park contained a water supply – so Jez got his fill.  Lunch and admin in van – with Wifi.
Across the mountains towards Kaifia Springs (again – second stay).  More lovely hill towns and a stop at Langardia for coffee – very narrow streets (have we written about these before?) – mega reversing to pass oncoming coach.  The usual visit to Lidl – and then the wild parking at the Springs – one other van (German) for company.
Now during the food prep, K opened the door of an overhead locker, taking the usual precaution of placing her hand to prevent anything falling on her nod…  well, this Greek olive oil bottle had other ideas – avoided her grasp – and in true aviation style – flew around the kitchen!!!   I was outside and heard the anthem “F**k a**e bum t*t” in her melodious and high pitched voice…..the glass was everywhere – floor, rugs – and next morning – even in the blinking shower!  The oil had attached itself to floor and all vertical surfaces, including K – not that she’s a vertical surface….. Oscar and I escaped.  Clearing up took a good hour – the unanticipated benefit was a thorough kitchen clean! 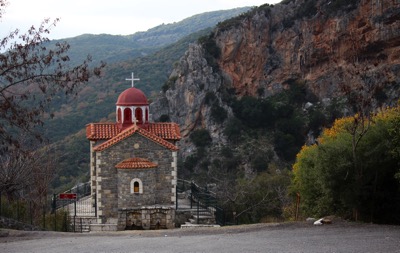 Sorry a few final pix of our loveliest of spots, taken with J’s mega zoom lens.  The chapel – our van view. 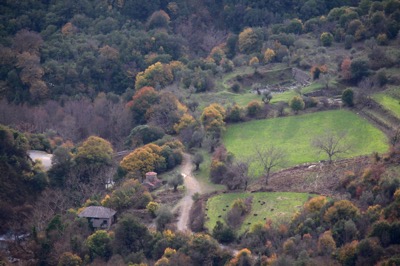 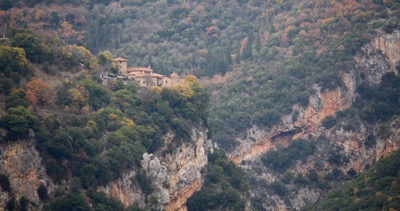 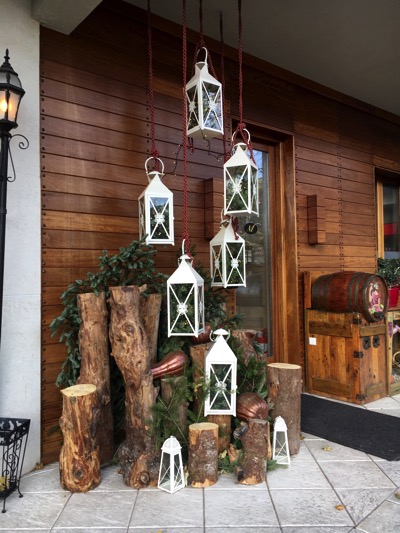 Spontaneous stop in pretty Langadia.  Not sure when the Christmas decs will come down. 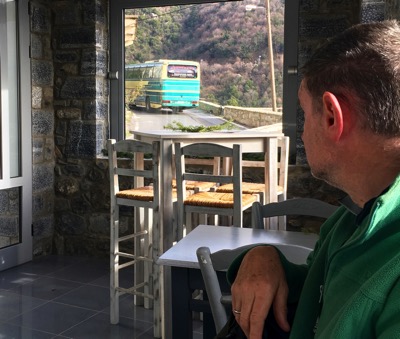 Watching busses and a huge lorry negotiate the narrow roads.

Morning – and my water babe took to the Springs – the reason we had come back here.  Vaulting high into the air straight over the gate – well climbing actually but the high jump sounded better…back in Jez – the sweet aroma of sulphur pervaded…… showered and brekkied, we eased back to Elea beach wilding spot – same pitch looking at the rolling seas…..  (I had declined the Springs due to a ‘mancold’, manifestly – not testily or feistily). 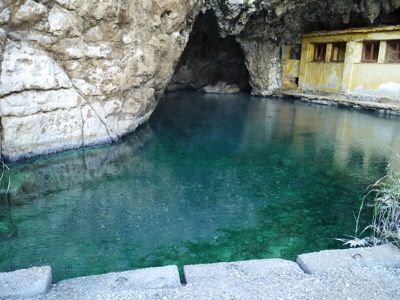 A swift climb over the gate and in – we’d seen locals do this on our last stay here.  The old bath house has just been left as an eyesore; the new on is adjacent.  The water gurgles up from inside the cave. 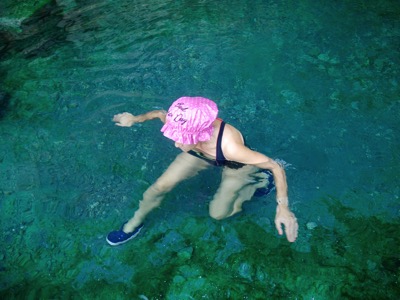 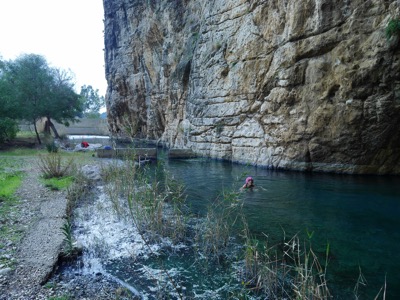 Slow easy day start, beach walking………..Rod and Bernadette came to supper – brought flowers and a yummy lemon curd – much chat and easy company…..we parted with them at 2:00 am!!! 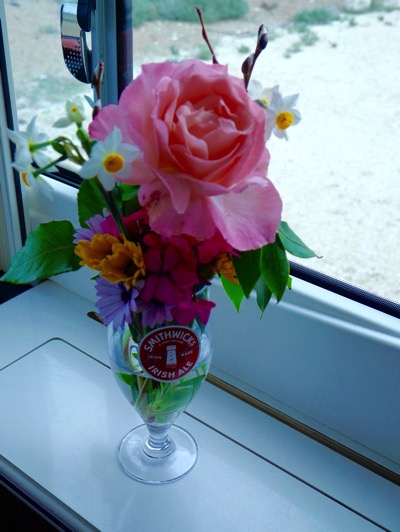 Rod picked these from their garden … they are just delightful and still have a wonderful scent.  Absolutely years since anyone has given me flowers, other than James, of course!

Another restful day – some admin, including updating our spreadsheet re putative house purchase in France…..  Verdict …Yes we can afford to live if we buy in France 🙂

A really sad adieu to Elea wilding after a total of 9 days!  Highly recommended, indeed.  Met Phil and Carol at Lidl – and on the Filiatra, via the Fairy Castle and Eiffel Tower.  Overnight on a lovely harbourside wilding, with the sea washing over the wall behind us – I wonder what time high tide will be? 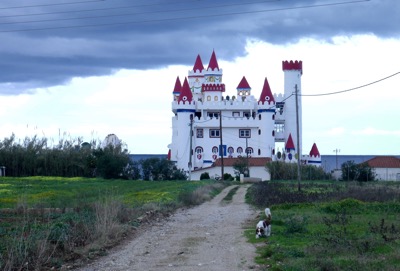 A Greek, Dr. Harry Fournier, returned from Chicago in the 1960’s built this … his son has restored it. 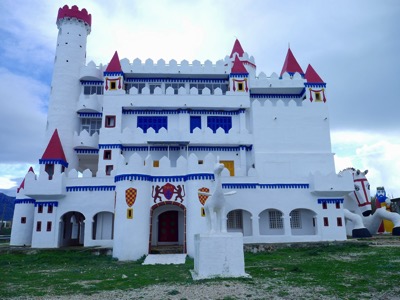 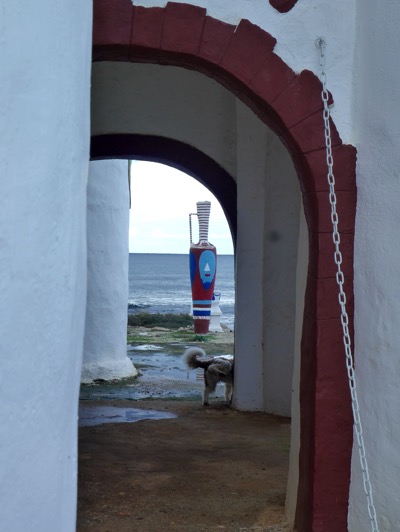 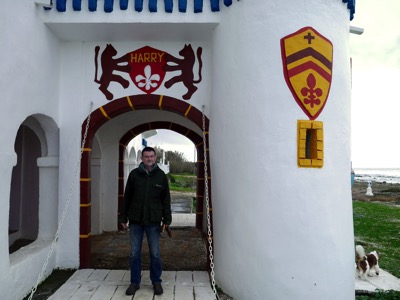 … pleased to say J is not following suit. 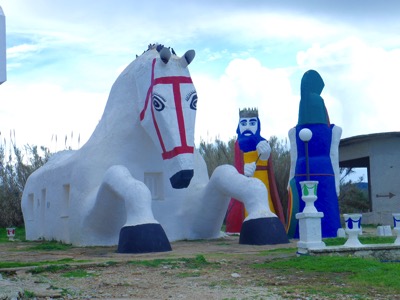 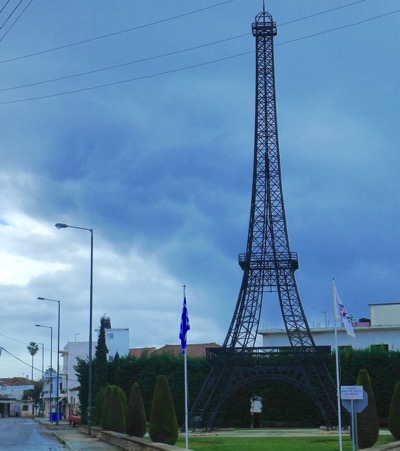 And he built a mini Tour Eiffel just into Filiatra. 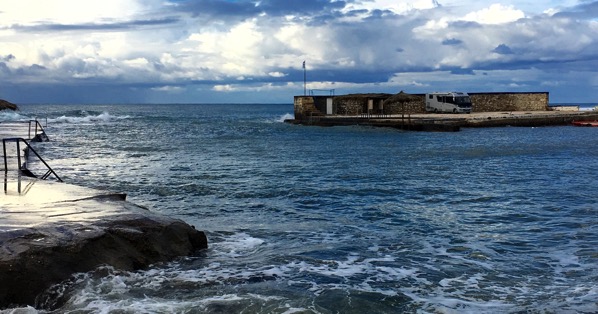 Our overnight stop Ag. Karachi.  Just hoping the wind is not up, or we will get a wave drenching!
Oscar’s Diary
They tell me I’ve been quite a few day at ‘Ellyyah’ – it’s good here – lots of nice K9 friends, girls and boyos….good humanoids as well, I must mention.
K phoned her Mum (and Dad) – they’re off to someplace called  “Eeejit” which is east of here with also sandy beaches – and Kyro (sounds Greek to me) has somethings called Pyromids and Spanks (very naughty, Grahame and Diane!).   Now most folk would say  “Morning Mum – how are you this fine day?”  Not our K – no need to roll out the nice-titties, sorry niceties… “It’s only I – can you bring some coryanngle to Athens?”   Blinking BT will never make money from the Leslie Clan!  If I tried asking for my dinner like that “Katherine – it’s only O – dinner now pronto?”  My backside would be whinging it’s way to Solihull…
Oh well, there’s newt as frog as folk, as the poet said….. this was short as time presses – people to see.
Efharisto.
Oscar