We’d planned to have a no driving day after the longish drive to get here.  And the log cabin with wide deck felt so relaxing.  Great views out onto greenery; we couldn’t quite see the sea, but you had to turn your head around to the right before you could see the field of motorhomes.  This was full of people of a certain vintage oozing through the day, taking siestas in the sun.  And we planned to have some of that.

But plans, as you know, go awry.

We’d been told by phone that the quote from the garage for the work on our MH would not arrive until Tuesday, but it pinged into my in box on late Friday.  After 5 abortive phone calls to the garage to tell them to go ahead (phone dropped in cradle, left to ring and left on hold for 20 mins etc), we gave up and drove to the garage.   At least this campsite was only an hour away.  At the garage, the receptionist found our paperwork and J duly signed off the repair.  She took my email and phone number and promised to get back with when the work would be completed … no prizes for guessing, that she did not.

By the time we’d done a big super market shop and found some half decent dog food, it was lunchtime and I’d not even had a coffee.  So we HAD to stop in a seaside village and have a light lunch … but this was then followed by dessert … so not so light after all.

Campsite Domaine La Pietra … after one of the local beers (although it would have been the beer named after the place!).  Not cheap, but wonderfully calm setting.  Wonderful bird song.

As the weather hadn’t yet really hotted up, we could have done without the shady afternoon deck.  We used the clothes airer and one of the sun loungers to gate CO2. 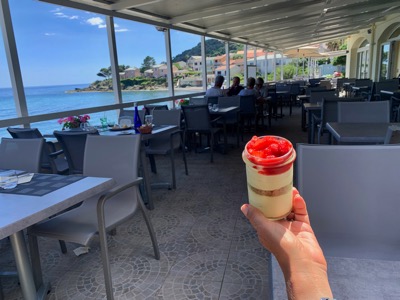 A strawberry version of Tiramasu … with our lunchtime view.

Picnic packed, we drove north around Cap Corse and back across the hills in the middle.  Coffee in a pretty dead village. Great views, but not as wonderful as the drive from Calvi to Porto. 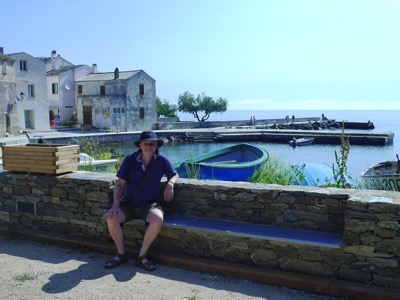 Porticciolo with one place open for coffee. 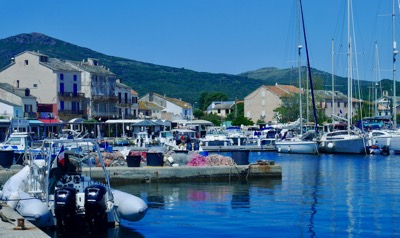 Macinaggio, top right of the finger.  Pretty enough if you’d wanted a restaurant lunch or a boat ride, but nothing else here.

Moving around to the top left to the viewpoint at the Moulin Mattei, this was the lunch stop.

Master of all he surveys.

Rather than be (completely) idle we trudged in the heat up to the ruin that we could see from our cabin deck.  Wonderful views, once we’d hauled ourselves up the last section by the rope provided.

About 20 stones telling you the plant names.  We just couldn’t always work out which plant they were referring to.  I recognised Rosemary!!!

And up we go gently …

… and not so gently. 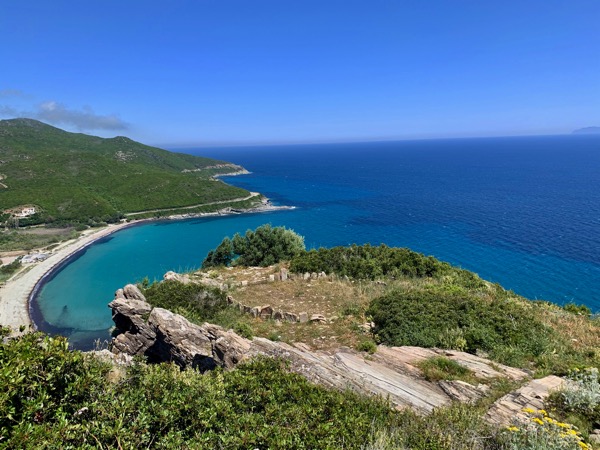 And J making it look easy on the descent.

Car loaded (jam packed), we headed off across the Cap to continue the western side of the finger.  We’d been told we could collect the car (probably) late afternoon.  We picnicked on a beach just north of Nonza, and then about 2.30 I tried to ring the garage … eventually got hold of someone!  Zut alors!  They’d ordered the wrong part!  They would try and get hold of the correct one urgently, as we had been waiting a long time, hadn’t we?????  Er … yes!

OK, so we are homeless and based on their work rate so far, we thought we wouldn’t get the car back until Monday … earliest.  So onto the phone to campsites for cabins at our next destination … Corte in the hills.  Finally, we phoned a site – the elderly-sounding gent said no problem … he would start to get one ready? H spoke to K alternately in German and Corsican French… after a total of 3 hours driving, wearied at 6:00 pm (dogs dinner time) – said gent said – NO DOGS – “Merde”!!!  He also blamed K for her bad French! Absolute bollocks – pardon my Irish…  Nothing daunted – we drove to the nearest town – Corte – to find a hotel – quick success – and doggy friendly with private parking.  The accommodation was 3star – a bit retro and tired but – a large comfy bed and big bathroom….  On being asked country of origin by the receptionist, K asked wasn’t it evident from her accent.  Non, madame speaks good French with an excellent accent.  K was therefore rather scathing (impolitely) about deaf and blind old men running customer facing businesses!  Food needed – so up to the square and a nice family restaurant. Then a glass of wine in our room – and lots of zsssss for all.