We literally drove to a car park in Cagliari.  James was a bit pooped so he rested in the afternoon and then listed on the radio to his football team, Dublin, win.  After all this excitement, it was too late to explore the capital of Sardinia.  So we went to bed early-ish to city sounds and the noises from the port.  Empty car park when we arrived on Sunday, and packed by the time we got up on Monday … free and close to town.

I’d plotted all the main sights on Maps.Me so was tour guide.  There are supposed to be a few elevators to take people up to the castello … I know they were out of order 2 years ago when Penny of europenomand.wordpress.com blog was here … and they still are!  So we slowly and stickily made our way up to the top.  Rewarded with views and a coffee.  We thought, being the capital of Sardinia, we would be back into rip of the tourist territory, but no, only EUR3 for 2 cappuccino.

We spotted a huge cruise liner in the port and discovered a huge number of Brits around … all off the ship.  They ‘done’ Naples, Florence, now Cagliari and were on their way to Cadiz, having started in Southampton.  All in 2 weeks, and here we are scratching the surface of Sardinia in a month.  We chatted to a couple off the ship, who were missing their own 3 dogs.  They were in trouble with the tour group leader who had been counting heads and missing two.

One of the highlights for me was the Giants of Mont’e Prama in Cagliari Archeological Museum.  The anther exhibit of interest was a stone with the first known script on it where the name Sardinia is used.  The rest of the museum contained a lot of artefacts we’ve seen else where, such as pottery, coins, urns etc.

Busy car park.  And not the nicest of views.

This was a bit smarter than the normal Cagliari street, which was very Italian … in need of a good jet wash and make over.  Shouldn’t say ‘Italian”; the Sardinian’s are Sardinian first and then Italian. 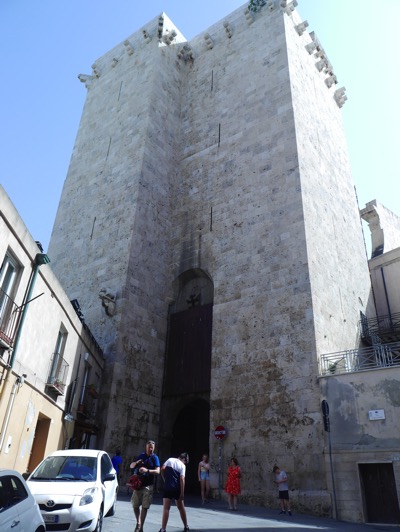 Pisan built in 1307 in response to the Aragonese threat.  One of the main entrances to the Castello and open to the elements on the rear. Elephant Tower ,,, due the statue on the wall … 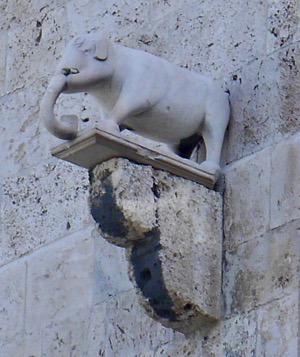 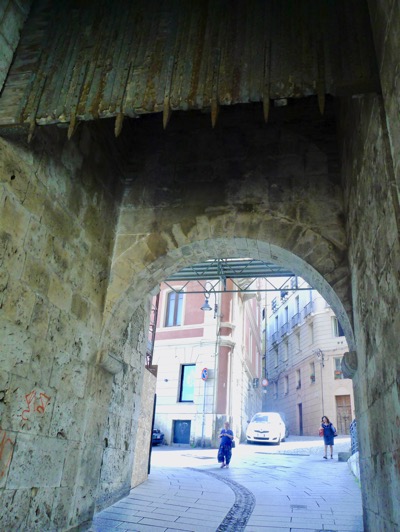 Wouldn’t fancy being under this gate if it were to be dropped.

Torre San Pancrazio with its open rear.  Also the Petit Train, but as the historic centre is so contained, there was no need.

The nuraghe Giants  were found by accident in 1974 in farmland.  They are carved sandstone and their height varies from 2-2.5 m.  15 heads and 22 torsos were found.  they symbolise warriors  archers and boxers and are believed to date from C11-8th BC.This ancient civilisation reflects the importance of the area in trade with places as far away as Syria. 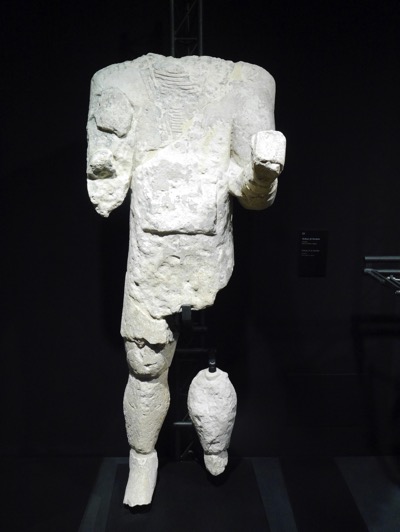 The Nora Slate is the oldest written document in Sardinia and “probably Western Europe”, dated between 850-725BC. The name Sardinia is on the 3rd line.

Cathedral Santa Maria Crypt.   This is the Martyrs Sanctuary as there are 179 niches with relicts of Cagliari martyrs. 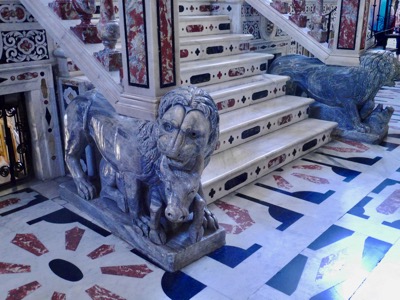 Santa Maria Cathedral … 4 lions at the foot of the balustrade. 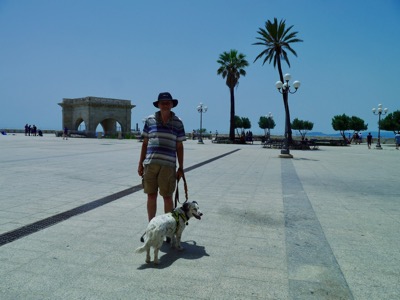 Bastione di Saint Remy; Built into the vita walls between 1899-1902.  A huge terrace with views 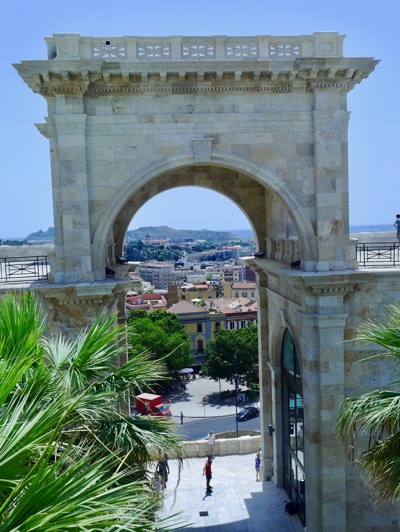 The main gate and stairs down.

After a very good lunch, we drove along the coast to our overnight, near Pula and Nora.  I wandered with CO2 whilst J napped and then early evening saw us take our first full cooling sea immersion.  And no need for wet suits to keep us warm!

Drying off.  Neither CO2 would enter the water … if only they knew what was good for them!

We drove a very short way to Nora.  On arrival we were told for an additional EUR1 pp there was an English tour in 6 minutes … our guide spoke fluent English and German, and had done his thesis on the ancient site.  An C8 BC Phoenician city, then inhabited and changed by the Punics and then the Romans in 238BC.  What you can see is the Roman on top of what lies below.  And what you can see is only a fraction of the entire city as the water level has risen 1.5 meters so a good chunk is under water.  You can see the baths , amphitheatre (which was being built up for the summer concerts) and and some impressive mosaics in a wealthy man’s house.  Much of the stone was recycled to build the local towers agains the Spanish and the ‘new’ inland village of Pula, when the kidnapping and raids from N Africa and the Visigoths got too much.

The guide was quite open about his political views … Sardinian independence, or vote at least.  Sardinia was the first Italian ‘acquisition’ and he resents that Sardinia history, poetry and the language are not taught at school.

Roads disappearing into the sea … on the right would have been the Forum.

After a refreshment stop in the Nora cafe (ice cream my have been involved), we headed to Carbonia – Coal Town.  When we toured Italy in 2016 we came across a lot of Mussolini / /Fascist evidence from land reclamation and people relocation experiments to architecture.  This is a whole town that was built on wasteland.  As Italy felt the pinch with sanctions agains Fascism, they had to find coal and there is none on mainland Italy.  Within months they had built a coal mine and a town to house the workers.  18,000 workers with 12,000 working below ground in 3 shifts.  The accommodation may have been modern with an inside loo, but the working conditions were anything but civilised.  Starting at the age of 11, menfolk often had to work 16 hours shifts, especially during the war.  They were not supposed to take food down, but did … no lunch or coffee breaks.  What little was paid the workers, was clawed back in rent, fuel etc charges. Back breaking and dangerous work.  Fatalities IN the mine were accurately reported as 128 … but none of the men who died above ground from injuries or lung poisoning made it onto the statistics.  The mine was only active for 27 years, closing in 1964, as it is lignite.  We know Greece still mines this!  The worker were offered a small redundancy package and may left to work in mines abroad.  I asked about those that remained … they mostly found work in the local dock, but with the recession … they were waiting for better economic times. 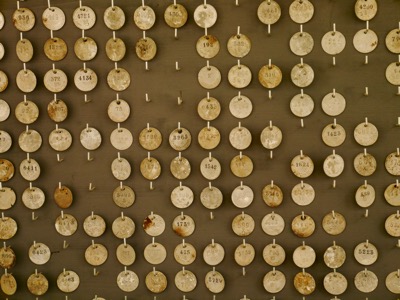 You are just a number.

Workers collected a lantern but no protective gear.

Winding gear … one up and one down.  A cage held either two trucks with material or 90 men.

A vibrating conveyor .. no dust or sound protection.

We didn’t have time to walk into the town to see the fascist architecture: apparently residents had had a backlash against the political ideals and changed a lot, but there was now a movement to restore the architectural principles.

Interesting to see where the world’s coal despots are.

Porto Scuso, where we stayed on a new, but not yet open aire in the middle of the fishing village. 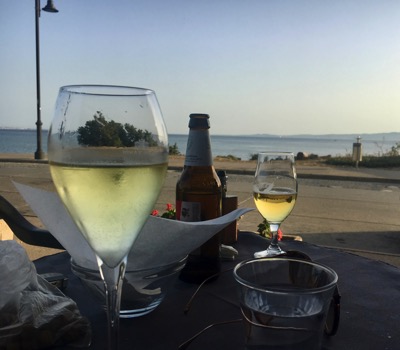 A few wines / beers to cool off  … just too hot to sit in the van.  And then we moved next door for a pizza and salad and a half litre of wine for under £20 .. we like Sardinian prices.