We returned north to Kissamos to spend the evening with Brian.  He had booked the daytime ferry for Wednesday morning which would take him to Glythio on the Peloponnese.  We had booked the restaurant in Kissamos that J and I had eaten at twice before, and bespoke a special meal … the daughter / waitress had told us that it was her favourite dish after I’d said how good her mother’s flavours are. She’d given me her mobile number so I could contact her to let them know when we were coming!

Morning CO2 walk up in the hills behind Sougia.

Farewell dinner with Brian.   Chicken cooked in the pressure cooker for 45 mins.  The rice cooked in the chicken broth and run through with sheep’s butter and lemon juice.  The rice, particularly, had a lovely delicate flavour, but I don’t think I’ll be rushing out to buy old chicken again.

We played cards … J tried to focus as Zoa straddled his lap.  As soon as anyone passed the fridge … Zoa was all attention – he’s quickly leaned that frozen kongs are an evening treat.

Quite a few people had picked up colds at the New Year’s Eve dinner.  J and I very rarely get colds, due to our fresh air lifestyle.  But when I do, it usually goes to my sinuses and I cant shake it off.  So I paid a visit to the Kalives doctor … they know us quite well now … wonder if they have our address down as … Camper, Beach Car Park?  UK doctors will reluctantly give me 5 days of Amoxycilin (I know the reasons why!), but I always have to go back for more.  This doctor gave me 10 days worth, probiotic for my tum and a nasal spray.  EUR 20 for the consolation and EUR25 for the meds.  Very happy with that.  And thank you for asking … the antibiotics are working already.

I drove to Chania and topped up on our Lidl shop, whilst J sorted Jez and CO2 out.  Showers and services.  After lunch we convoyed to Chora Sfakion … it really is a stunning route over the White Mountains.  The snow we went looking for, a week or so back, has largely melted.

We are parked up at the entrance to the harbour, which is mostly full of boats lifted from the water, advertising day trips to Gavdos and Loutro.  Coffee with the locals … the toilet was interesting … a portaloo perched on the edge of a cliff with the wind howling round!   Amazing stars again, given so little light pollution.

A pretty rubbish night’s sleep … before bed we had moved Jez to face the wind, but in the night the wind moved.  A late start!  J slept worse than I, so he rested whilst I took CO2 off in the AndyPandyCar.  I had a BIG smile on my face the whole trip.  Stunning views from the switch backs up and then down to my parking at Livaniana, which had no sign of life other than free roaming goats.   A narrow road down, covered in red dirt, that then gave way to a dirt track.  Oh well, done these before – just concentrate!

The actual gorge walk is described as strenuous with plenty of climbing over rocks and ladders … not one to do with CO2.  Apparently descending from Livaniana would have meant I could have walked the easier part and done a circular walk.  Had I been able to find the path!  So I followed a path I could find, with CO2 strapped to my waist … far too much goat temptation.  I didn’t feel at all hard done by as the the views of the gorge were simply stunning and I got to walk in the warmth of the sun.

On the way home to J and Jez, I did a slight detour to nearby Aradena … I’d read about a steel and wood bridge spanning the gorge.  It’s installation was paid for by a wealthy business family whose village would have been cut off else.  The village access being a very steep foot / donkey path down the steep gorge and back up the other side … gotta bring James here tomorrow.

Up the road moving west from Chora Sfakion.

The Aradhena Gorge clefting its way across the landscape.

The gorge approaching the coast. 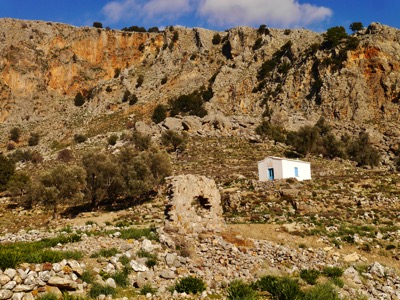 CO2 and I stopped for an H2O and sun break at the chapel.

Enough shell cases to smelt into a church brass bell.  And BBQ fire pits … CO2 trying to consume all the cooked bones left behind!

On the way back down … this is our destination in a few days … park at the bottom and walk over to Loutro … accessible only by foot, donkey or boat. 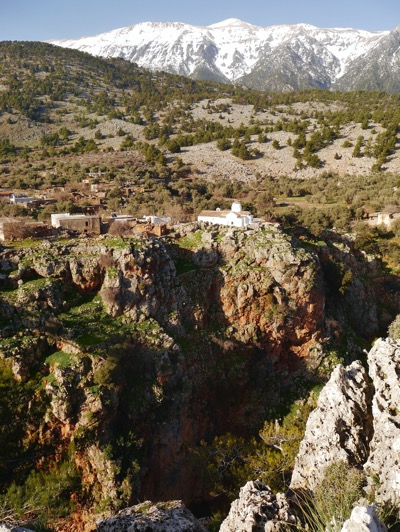 Aradhena, perched over the gorge.

Distant view of the steel and wood bridge.  Built in 1986 by a wealthy international business family, as a lifeline to their village further on. I’m sure it dips in the middle! 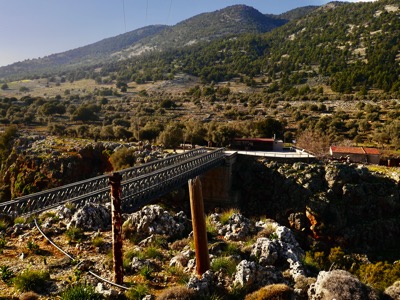 The guide book states ‘Rumble across it in a car and the terrifying crack of the wooden boards against the metal thunders around the gorge below”.  It was surely a stomach in mouth moment, to walk it too, as there are cracks between the boards, and the boards move …  I will take J back for the experience tomorrow … he will want to inspect the rivets!

And now you can see how deep the drop below is!!!  In the summer, you can bungee jump off!

I was a bizarrely a tad disappointed that J who is not over keen about heights, was absolutely fine on the bridge.   He won’t do the platforms on the Willis or Hancock Towers.  I should have remembered that he knows bridges.  Not even a single rivet inspection.  What I found particularly strange was the lack of max weight sign … was it OK to hold a 15 ton lorry then?  Would not have wanted to drive Jez over at around 4.5 tons.

We drove onto Agios Ioannis on the road to no where.  At the end of the road, we spontaneously decided to respond to a walking sign heading to Kormopos Cave; Loutro could wait till tomorrow.  Although we had no views until near the destination, it was interesting as it was wooded, whereas most of the landscape is low scrub.  The height we attained … and it was a looooooong up, and then a looong down, meant that we found both cloud and snow.

We picnicked over looking the cave, not chancing the wet, steep and narrow path down to it.

No need to check the rivets … J’s a bridge man!  I did spot that the last one had popped up, but we were over by then.

CO2 reluctantly set off over the bridge, thinking this was the way we were headed … only to have to come back again. 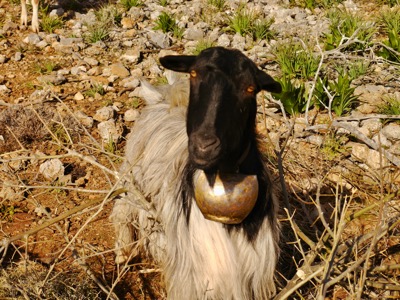 A curious gaze and a very large bell.

A totally different landscape and we found snow. 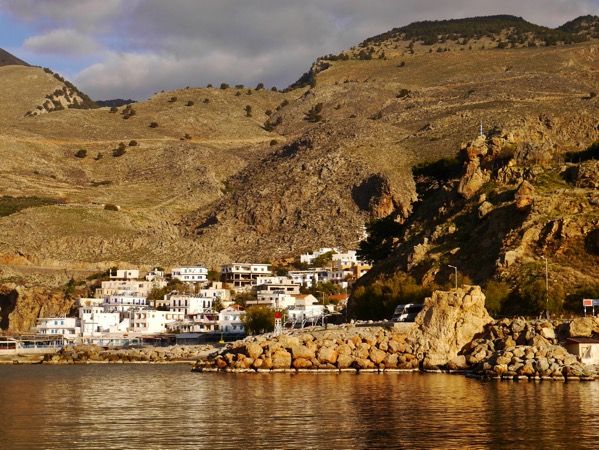 This is Chora Sfakion – you can see Jez’ nose poking out behind the rock.  Our home for 6 nights.

1423: An Interesting Journey to Loutro

Loutro today.  It is named as one of Crete’s gems … inaccessible by car.  A lot of trippers catch a boat here for the day.  A scenic drive to Finikas, brushing the donkey with the wing mirror as we inched past, and then down the super steep and nerving road / track down.  A really pretty walk around the head land, with views and passing and archeological site.

We had been ripped off at cafe in Sfakia … tourist prices and had been using a taverna up in Anopoli for the last few days for our morning and afternoon coffees.  There was a restaurant open in Sfakia, but TripAdvisor had mixed reviews … so we went back up the hill to Anopoli for supper.  Really excellent quality and good prices.  On the way back down the head lights picked out lots of boulders … no the goats were all tucked up on the tarmac, so we chicane’d around them.

Tarmac to start, but a good half is dirt track… 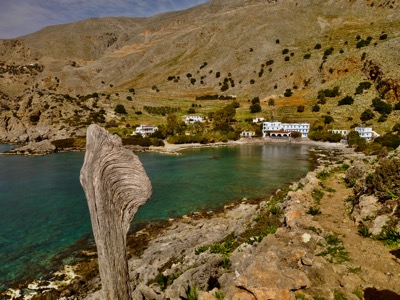 Looking back to Finikas, the hamlet, where we left the car.

Walking around the headland; the archeological site is behind the church bell.

Chora Sfakion is just in the distance.

We climbed a bit and then decided it was too hot and too steep, so we returned the way we came.  Loutro is not inhabited … it is all restaurants and holiday accommodation.  They day trippers pile in on boats.  The beach is TINY … so where do they all sit?  In high season, you must physically be rubbing shoulders with neighbours. 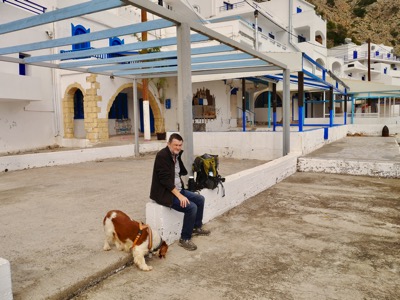 Loutro picnic spot.  All the awnings and verandas removed for the window.  We and a chap, painting the mandatory white, were the only living souls. 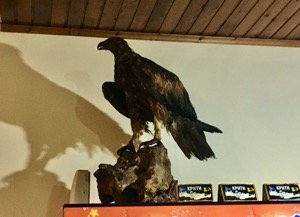 Lots of large birds of prey near the gorge, and the odd one came for supper!

Amazing quality food at the Anopoli Taverna … J said they were the best meatballs and my pork with peppers was just yummy.  We ate the lot!

The weather forecast was not marvellous, so we decided to drive back across the mountains to Chania … 3 full loads of laundry, e juice for J, a new phone screen protector and woolly tights for me.  On the way back down south, we stopped off at Icarus restaurant in Kalives … another yummy plateful and a good chat with owners Michelle and Micahlis.   I’ve just got on the scales … 4lbs on this week!