A Lidl bit of shopping … managed to nearly spend £100 … £36 of that on booze.  Karen and I had been pining for Aperol and found it in the Turkish duty free shop, just between the border with Bulgaria. We bought a bottle each and I bought 4 different sparking wines in Lidl to sample … purely in the interest of research, of course!  Sadly our bottle remains unopened!  It carried on raining stair rods and we’ve had to resort to long trousers … not Aperol weather at all.  How ‘sod’s law’ is that … finally lay our hands on some and then not the weather to drink it!  We’ll have to stick to the duty free Gordons and then the Lidl version!

I’d planned a run, but too wet.  CO2 have been in and out of their doggy dry bags!  I promise never to moan that it is too hot again … today where we ended up was all of 9C and the UK is starting a heat wave.  For once we are in the wrong place!

Hey ho, we set off after a coffee and a tasty sauted onion filled pastry and headed SW.  But progress was so slow!  The roads are truly the worst we’ve ever experienced … and that included Italy!  The patching has obviously changed colour over the decades. We arrived in rain down a windy narrow tarmac road in the rain.  D&K, ahead of us, were already exploring.  In the rain we walked up to the Devil’s Town pinnacles.  We’ve seen this phenomenon before (Forget where!), but these were by far better.  Even in the rain!  After our walk, we slept at the car park …and listened to the rain get heavier!

The Well:  So much iron ore in the soil.

We don’t have any torments, so no hankies left!

Either they are tall aliens with hats or phallic symbols! 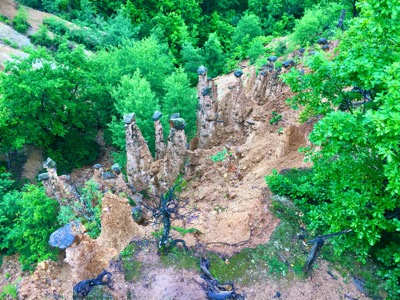 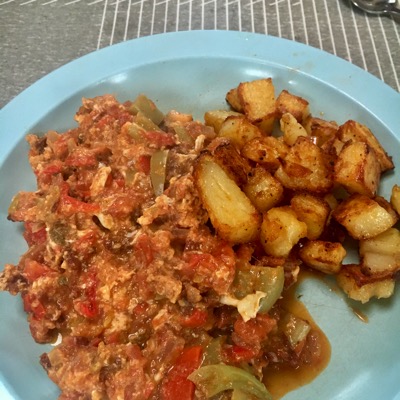 Looks a mess, but tasted fab … Turkish Menemen and paprika roasted potatoes … apparently corn flower is the key to crispiness!

It rained all night and morning.  Like the 40 days and nights.  We had to drive out with rushing torrents crossing our single track road.  Rock fall and churned up brown rivers, that had been mere streams the day before.  What’s that noise we said?  J nobly got out and checked the tyres and underneath … we had not caught any of the flood water detritus.  As we got to the main road the noise was louder.  He investigated again … the force of the water had pulled the steel arch trim off.  Strangely when we did set off again, there was no warning noise … the noise altered us before we got too far away to retrieve it!  My turn to get wet … a walk back along the lane to find the wheel trim a couple of KM back.  Shoes wet through from wading the torrents and soaked down to my knickers!

But we had the wheel trim!  Slightly battered as a car had driven over it.  I reckon having the part has saved us about £600 as the front bumper part alone was £2600!

It seems to have just been attached by glue! 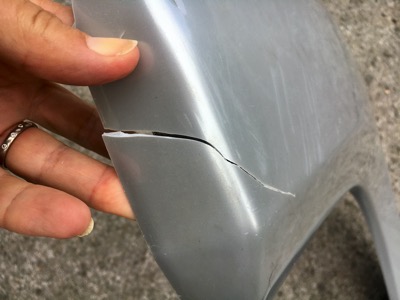 The drive only marginally improved.  As we approached the National Park by Kaoponik, fog lamps were deployed!  The view (apparently) are stunning, but we could only see a few metres in front of us and it was still raining.  We aborted sightseeing on the basis we would not want to get wet again and parked up off road up high in the mist!  Day done.  Tomorrow has to be better.

David and Karen missed out on slow cooked pulled pork as we agreed to part company for 2 nights.

It rained all night … didn’t yesterday start like this?  About 10.30, it stopped but not early enough for us to enjoy the views.  We were later told these were the worst floods since 1965.  We decided not to stop at Kaoponik … a very large ski resort and busy.  Good to see walkers out … a lot of nationalities don’t walk for pleasure.

As the mists cleared we had glimpses of the hills.

Today’s journey was not incident free either.  J was looking for a space to pull over to let a lorry pass … he was super impatient and clipped our wing mirror.  He did the decent thing and stopped to make sure it was OK … fortunately it was.  Lucky or divine protection?

First destination was the Church of St Peter just outside Novi Pazar.

St Peter’s stone church is the oldest in Serbia.

Apparently these shaped grave stones were fashionable in C18. 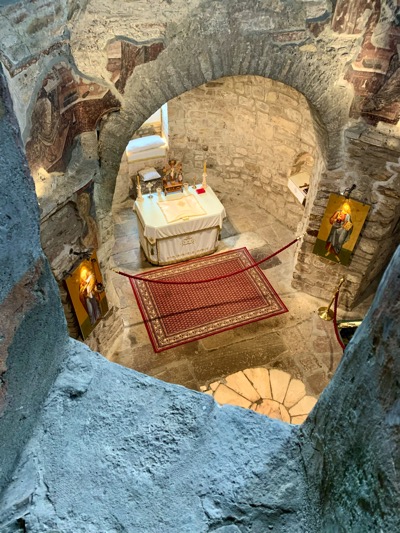 Able to climb the tower.

The lady showing me around (we went in singly cos of CO2), said she was surprised to see us. Visiting each other in groups during a festival had resulted in a huge spike of Covid cases and Novi Pazar was the epicentre.  The infected were being shipped of the Belgrade as the local hospitals couldn’t cope.  Shame for us, but we decided not to visit the town with its old Turkish centre and copper ware products.

Sopocani monastery next.  Lunch in the car park first.  We had the place pretty much to ourselves.  A sole monk with some English converted the Euro entrance fee into Serbian Dinar … seen a lot of this.  Of the same tone, seen a number of EU funded projects … last I looked Serbia was not part of the EU.

Built mid C13 by King Uros, who is buried here.  Destroyed by the Turks end C17. 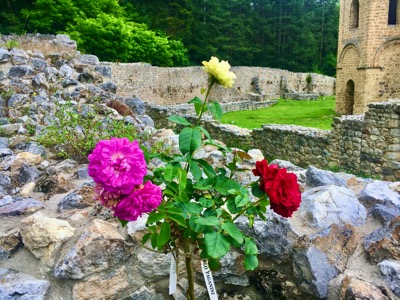 This divine rose is three colours on one root stock. 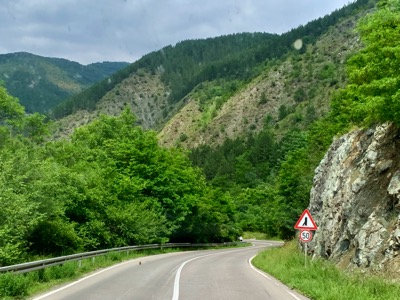 The drive to our over night by the Studentica Monastery was lovely … scenery pix for the Aged P’s as Serbia was their 4th holiday to have been cancelled.  And for once, we have visited a country before them!!!

A peaceful night in the carpark of an abandoned hotel and CO2 were able to be off lead.  We were joined by a surly Serbian motorhomer … try as I might I could not get a Dobar Dan (hello) from him.  And check out that blue sky.

One of the most sacred sites in Serbia. 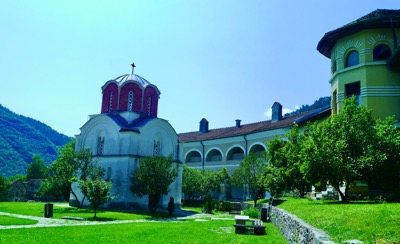 Continuous monastic life since 1190.  The old cells were ruins, these were built in 1900’s.  The Curator took us into the Church of Our Lady, which is undergoing restoration. 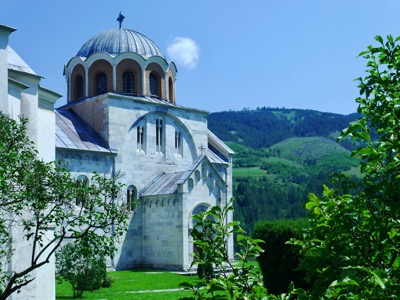 Some monasteries have a really peaceful atmosphere.  We liked it a lot.

Logging area near Studentica … and my shoes still drying out!

Leaving Studentica, we had planned to do some more sightseeing before meeting up with Karen and David at a campsite in the Tara Mountains, but the roads were just awful.  There were SO MANY traffic lights, queues and bumpy bits, as most of the road structure seemed to be under repair.  And it was getting hot, not good when you switch off the engine as stationary.  When we arrived at the campsite, the Aperol was finally opened! 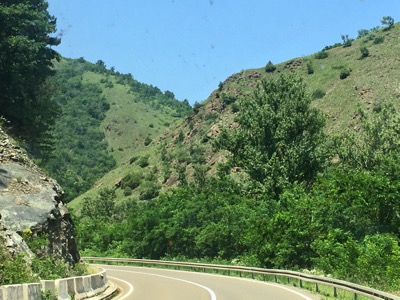 Pretty scenery, not majestic but pretty.