Camping Zip in the Tara National Park is just great, so we stayed 3 days.  Water and EHU on the pitch, super clean facilities and great views.  Oh, and the company weren’t bad!  CO2 were delighted to see K and D, the dog parents … it is being written into our wills.  When a storm came over, Corrie was found to be seeking comfort with K and D! 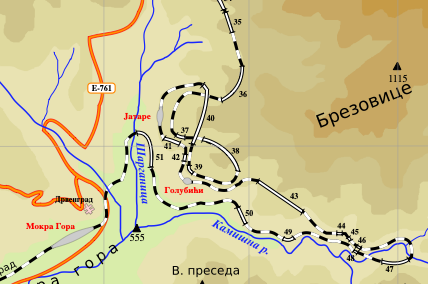 Construction of the Sargan 8 railway started during WW1 and it connected Serbia (partly Bosnia and Herzegovina now) with Austro Hungary.  Italian and Russia POWs had a tough time digging into the rock and snake infested land.  Work resumed under Yugoslavia in 1921.  The ascent of 300m is dealt with by the figure of 8 (hence the name) and the track actually crosses itself!  It connected Belgrade with Sarajevo and closed in 1974.  The section here was repaired and is now a major Serbian tourist attraction.

Glimpses of the track snaking around. 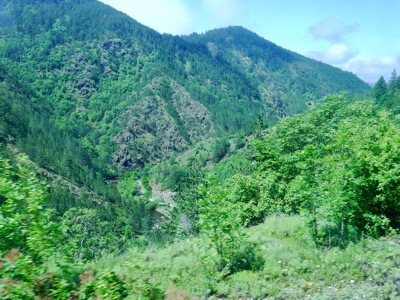 They could do with removing some of the trees for photos!  But they did stop a few times on the descent for photo opportunities. 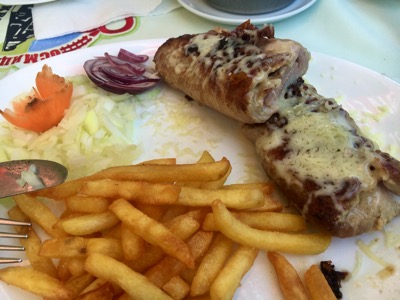 We didn’t fancy lunch at the Mokra Gora station … the lady serving coffee had been a little surly, but a hot trek into the small village revealed no other choice.  A quick glass at a bar and back to the station for a late lunch.  This was pork rolled around ham and cheese … am finding Serbian food too meaty and not enough sauce.

David offered to drive, so we piled into Buster.  Destination Lake Zaovine up in the Tara National Park.  D and K had previously cycled a good chunk of it until their batteries (bike and own!) were close to exhaustion!  So driving all the way it was.

Woods on the drive up and then opening up to the valley with the reservoir.  After so much rain the murky waters were released from the dam.

Karen wedging the fridge door after it threw a tantrum on a bend!

We tried the only restaurant for lunch, but no dogs!  Hurumpf!   We backtracked to a small village cafe and had buns!  The only choice was filled baps.  A local dish!  Some lovely English speaking ladies helped us with the menu and suggested the fillings … egg and cheese or ham egg and cheese.  Surprisingly delicious … and given how busy it was, obviously known for its baps!

A few KM away was the Drina gorge … K and D had been told about it.  Some steep sides off the road … and then a fab view point.

Just had to climb that for the view! 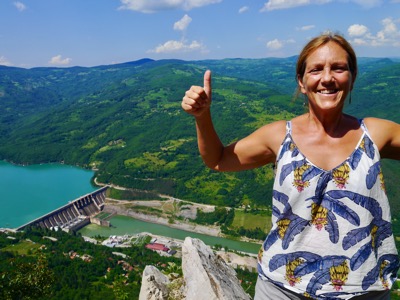 We were parting ways tomorrow so a ceremonial handing over of the bread knife we’d lent K&D all those months ago!

There was a Russian called Michail on the campsite.  In conversation with David, it transpired that he’d spent time with Danny and Lisa on a site in Belgrade.  His home is Montenegro, where his wife and 2 children are.  And he couldn’t get home. Danny and Lisa had spent a few days in Kosovo and had just come back to Serbia.  Crossing at the same border point is OK, but the guard wanted ‘paper’.  Danny translated this as a bribe, but played dumb.  But you have my papers in your hand!  You have our passports!  They did a long drive but arrived that evening at Camping Zip.  A BBQ and far too much to drink … again.

Due to the spike in Covid cases, Croatia had just closed its borders with Serbia … except for transit or a 14 day rental / quarantine.  Transit is 24 hours with resting at motorway services and then only 12 hours to cross Slovenia.  Probably quarantine in Italy.  So what to do?

D and K elected to transit back through Bulgaria and enter Greece.  We’d heard of people that had done it.  We reluctantly decided against Greece:  W

e have to be back in the UK for mid August, ferries are not yet running and prices have shot up.  If we have to quarantine somewhere, let it be in a rental in Croatia.  I found the cheapest I could find … very basic and only £279 for 2 weeks.  If is truly awful we can still live in Jez and just use the shower, wifi and fridge.  if quarantine is lifted, we can leave early … at that price we weren’t going to worry about it.  But first we would go to Belgrade as we’d booked a camper repair / hire / camper stop to re-affix the wheel trim.