David and Karen left Zip Camping first to head off to Greece.  Danny and Lisa stayed on another day at the campsite.  Quite emotional as we have spent so much time with particularly Karen and David.  After a few jobettes (and a slow start) we headed off for the wheel arch repair in Belgrade, or Beograd, as it is known in Serbia.

We stopped off in Uzice, as Michail had told us about a cheap shoe shop … I forced myself to buy a couple of pairs … J didn’t!  Think that now makes 14 pairs, I think … oops.  In my defence, my lord, I do need shoes for all seasons!

Given that dogs are not allowed on public transport, busses were not an option.  So we used bikes to travel the 4.5km into the city centre.  Not pleasant.  Begrade drivers are just soo impatient.  Beeping horns at each other even when the car in front cannot move.  Busy.  No cycle tracks; we used the pavements a lot.  And it was HOT … 38C.  We started out following a GPSmyCity sight seeing tour, but aborted about half way through and headed to the fortress park for a lunch … which we slept off in the shade! 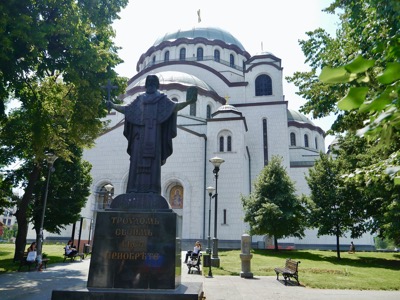 Cathedral of Saint Sava: The largest Orthadox Serbian church and dedicated to the Medieval saint who is the founder of the Serbian church.  It is modern … started just before WW2 and was only completed in the ‘70s.  And one has to question the workmanship, as the main church was undergoing serious renovation ….

… only the Crypt was open.

The lovely Kalemegdan fortress complex … we ate, slept and admired the views of the Danube.

And when we returned, the wheel arch crack had been glued and re-sprayed and the glue off the van cleaned up … it would be affixed tomorrow.

The info sheet we’d been given a the camper stop offered to book us a taxi … not happy to cycle again, we booked it.  It turned out to be the camper stop / garage / furniture shop owner … happy for dogs as he brought a different car with a big boot for CO2.  He told us that Belgrade had been destroyed 15 times!

Zemun is the other side of the Sava river which flows into the Danube and is one of the oldest parts of Belgrade.  Narrow streets, low rise attractive buildings, a street market and a relaxed vibe.  We liked it a lot and did another GPSmyCity walking tour … I’ve paid for the full app and it is getting used!

The Zemun Gymnasium1858,  undergoing some refurbishment – renowned for its academic record.  But with initially only 21 students, that should have been a fairly easy achievement. 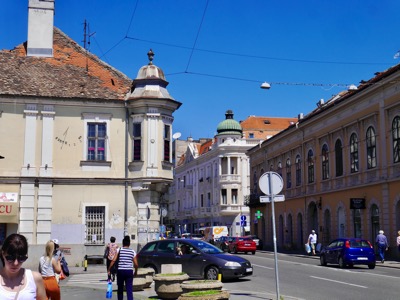 The sun dial to the left of the window still works … not sure why it wouldn’t with no mechanical parts!

Wide boulevard along the river … CO2 had a good run. 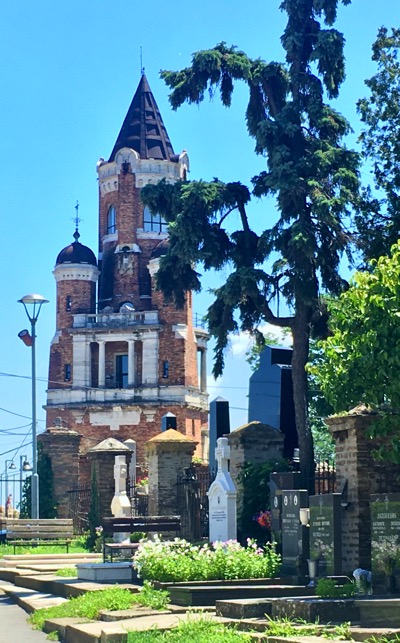 View over Zemun and the Danube. 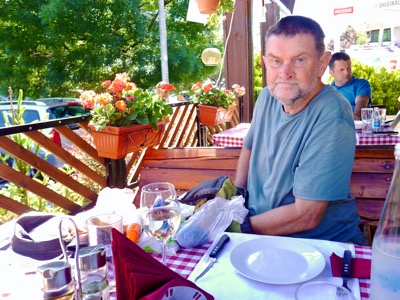 And lunch … a lovely wine suggested by the people at the neighbouring table.

And when we got back, the wheel arch was on … good to go tomorrow.  BUT where???  It transpired that the Hungarian border is fully open from Serbia.  It would mean we could tour in Hungary and not have to quarantine in the house we’d booked in Croatia … rules could all change on 1st July ,,,, but Croatia is not good for wild camping … we have been all along the coast … Hungary was our intended route back after this trip and we have the guide book!!!  So a change of plan.  Hungary it is.  Danny and Lisa will use the Croatia house for a few days …  it was not enough money for us to worry about …. and should we be refused at the Hungarian border, we can about turn for Croatia!