OK, so I’m STILL playing Blog Catch Up, in a big way!

They’d discussed it, considered it and discounted it before.  So we thought leaving our stuff at the Aged P’s house was OK.  Then we got that phone call.  We’re selling and down sizing.  Please come and get your ‘stuff’.  Research and a really useful FaceBook called Group Road Trip: UK to Greece & Back and we were fairly confident on what paperwork, tests etc we needed.  Right to transit is a very powerful travel card.

On another FaceBook group someone asked about getting a dog from Crete to UK, on behalf of an elderly friend.  We offered if the dog was not too big.  It turned out to be not one but two LARGE dogs.  The owners had been on Crete for 16 happy years, but infirmity meant they could no longer cope and were relocating back to their family farm in Kent.  We agreed to transport them!  Mad!!!   So our road trip became a Canine Odyssey!

Departure Date was booked on 27th April, so we could enjoy James’ birthday on 26th.  Just before this Karl cooked a memorable birthday meal with his signature work of art cheese board and short rib beef which was unctuous.  We officially didn’t need PCR tests as transmitting Italy, but Minoan said we did, so we had them done at 8.00 that morning.  Results back at 2.00 – first hurdle cleared.  We collected our 2 guest dogs so all 4 could get used to each other before we crammed them into Zorba the Greek car.

Rex was a nervous dog and took a while before he’d come into the house.

Car seats came out, giving us a flat space for the 4 dogs.  All our SCANT luggage was tied vertically to the head rests to give the dogs lying sown space.

Day 2:  Driving up to Igouminitsa for a longer overnight ferry to Ancona, Italy.

Day 3:  Arrived in Italy late afternoon so drove for a couple of hours after curfew (had a form in case we were stopped) to a pre-booked dog friendly hotel.

Day 4:  Antigen tests in Reggio Emilia and drove to another dog friendly hotel near Nancy France.

Day 5:  Up through Belgium mostly to a hotel outside Calais. Constantly checking if Antigen tests were uploaded by the lab … considered going via an airport … moved crossing and booked an extra night in Calais.  As well as being the weekend, it was also a bank holiday across most of Europe … so everywhere shut!

Day 6:  Should have caught a morning train, but antigen tests were still not available online!  Sunday … wandering the delights of Calais!

Day 7 – 3rd May:  Free and fast antigen tests and late morning train.  Dropped Millie and Rex in Kent.  Collected UK car from Aged P’s and drove both cars onto our house in N. Devon for our quarantine.

Day 1:  A sunny spot on the Chania ferry before we set sail.  The cabin was very stuffy and smelly … with 6 bodies …. dog breath and flatulence!!

View of the Drapanos Hill and Almyrida.  Gillian messaged me to tell she was on the Kalives beach and waving at our ferry, , so we waved back … not that we could see each other!!! 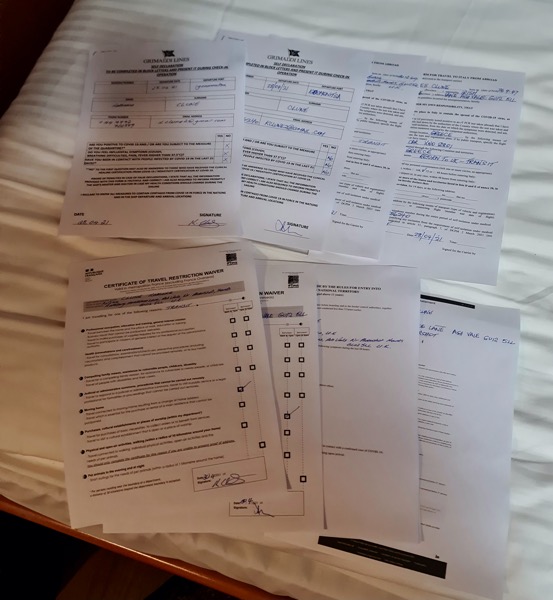 The evening was spent completing all the transit during curfew and Passenger Locator Forms we needed for each country.  Fun!  A whole new level of admin and stress!  It was good we had, as there were a number of road block in Greece and one chap wanted to see the ferry to Italy form … think he was miffed he couldn’t fine us for breaking the out of prefecture rules.

The ferry stopped at Heraklion before crossing overnight to Pireas.

Day 2:  Early morning off the ferry and straight to a beach for a dog walk.

We were in plenty of time for out evening sailing from Igouminista, so lots of dog walking and a really good gyros for supper.  We’d seen this old tub sail into port, but couldn’t quite believe that it was our boat.  But it was and it did make it to Italy.  Trucks but very few passengers.

Day 3:  We didn’t arrive in Ancona until late afternoon.  So plenty of time to sample the extortionate EUR4 coffee, but it was an Pukka Italian espresso.

Early evening walk as soon as we found a beach once off the ferry.  Despite lots of coaxing, only 2 of the dogs pooped the poop deck.  Can you imagine holding a wee for 18 hours????  Cabin marginally less hot and stinky than the previous crossing. 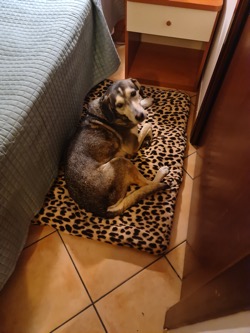 Settled in their own beds after lots of bed hopping!  Fabulous hotel with no charge for dogs and large room.

Day 5  Whilst J was driving, I was checking for tests, investigating if anywhere was open for new tests, changing the Tunnel and booking an extra night in the calais hotel.  We couldn’t find anything open other than a few small service station shops, so breakfast and lunch were chocolate.  Supper was an emergency tin of COLD cassoulet I’d bought en route.  A tough day in many ways.

Day 6: Tourists in Calais!  Think we’d done most of the sights by lunchtime!  Only 6000 steps seeing the Town Hall, Vauban citadel and lots of municipal gardens … one style of planting …. only 2/3 flower varieties and straight lines. 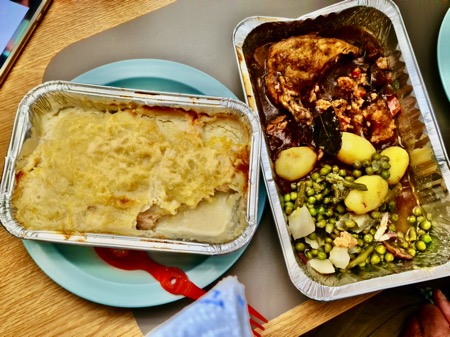 Being Sunday , Covid and a BH weekend, we couldn’t find anywhere for a coffee and only found 1 restaurant open in all our walking around Calais town.  We ordered a takeaway … chicken and fish pie.  But again it was COLD, as the restaurant assumed we’d heat it up at home … hotel foyer microwave broken!  We were making good headway into our Greek wine stocks by this time!  Since Brexit, we are limited to 18 litres of wine per person, so we crossed with just under that!

Quarantine in our house in North Devon was OK.  We did pay for test to release, but lost a day due to when the weekend fell.  On the 2 days we had to post the test results we took the long way round to the post box.  And our neighbours walked CO2 a couple of times.  They would have taken them out more often, but the weather was dire.  Felt cold.  We cleaned both cars.  Did admin.  Still felt cold.  Sorted stuff in the shed.  Did some exercises.  And watched far too much TV!   Still really cold.  And thank you to all the Crete folk sending us pix of the warm weather there!  Mum had knitted me 3 garments, the first to be sewn together was a super chunky jumper, which I then lived in!

We got through a lot of logs! 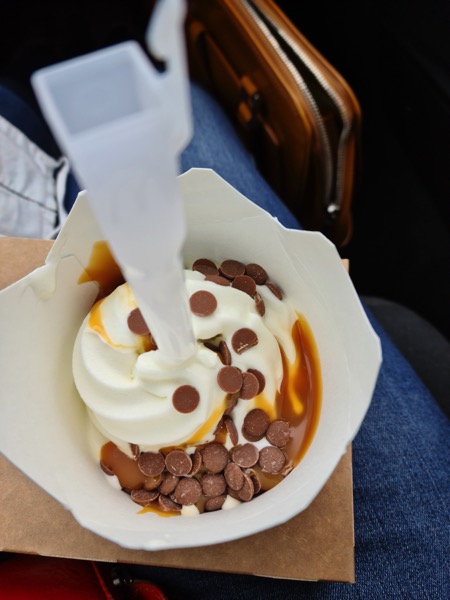 Tide out at Combe Martin. 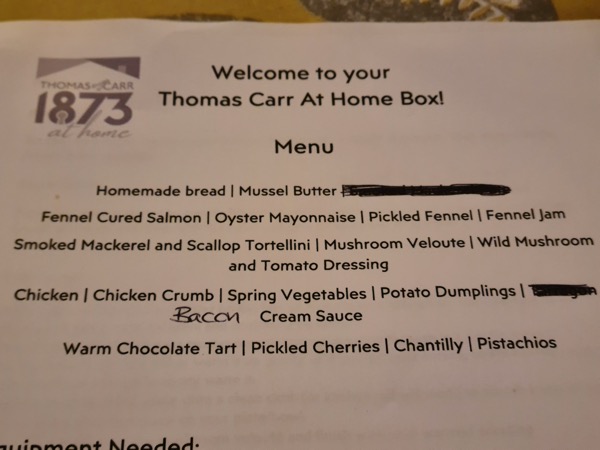 We ate well once released … this was the take outs for putting together at home from Thomas Carr Michelln *  and Lin and Bo, over in Exmoor fed and watered us! well. 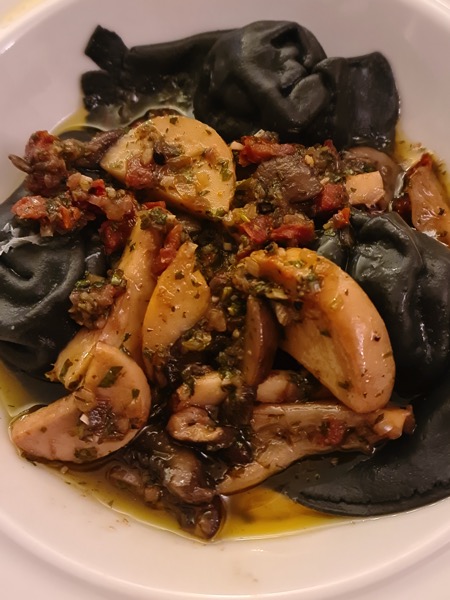