A busy morning to make the most of being on a campsite with electricity and services … knowing we had to be off by 12.00, and they drove around to check who was still there!  So J got a much needed hair cut and Jez a sweep out … K a shower and Jez all services done.  A stop at the Dark Hedges included a coffee at the hotel  / golf complex.  And then onto our overnight parking just S of Antrim on Six Mile Water … Jez’ parking fro the next two nights nearby was Seven Mile Straight … a bit of theme going on there.  The reason for this parking was to be near the overnight parking for me to get a flight home.  It was a super quiet spot with information boards about how the river had steamed and clanged to the manufacture and treatment of flax to be used in linen. The walk is called the Mill Trail.   I missed them, but a local dog walker told me there were otter playing. 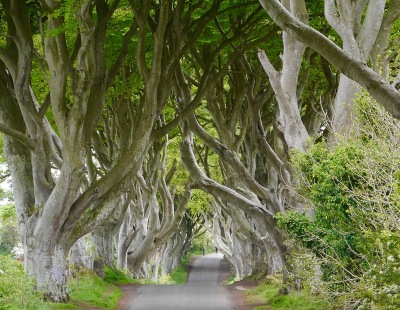 The Dark Hedges were 150 beach trees planted by a house owner to impress his neighbours, but only 90 remain.  It is now a public road; fortunately not busy as visitors dart into the middle (us included) to take pix.   The lower branches have been pruned which adds to the intertwining feel. 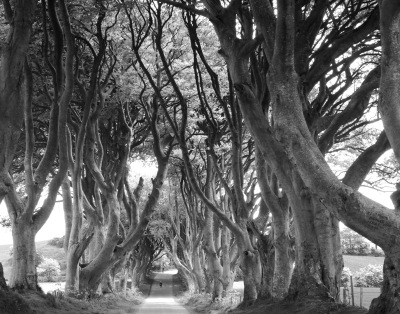 Another walk for O along the river and then we set off, early for us, to our parking for James, Oscar and Jez, whilst I was away.  Now we all do silly things sometimes, and this was one of mine.  J cannot drive Jez at the moment (uninsured as issues with his 70 year old and 3.5+ ton driving license).  I booked my overnight flight home with no thought of how I was to get to the airport with J unable to drop me.  So a very generous local came to my rescue.  I’m a member of the Irish motorhome wild camping forum, Motorhome Craic (they helped us out big time recently with the fridge not running on gas) and I posted asking for any suggestions of where we could park up with public transport links to Belfast airport.  The chap, Ally, who runs Motorhome Craic, instantly said we could park over at his … only a few mins from the airport.  He runs a caravan storage and has lots of space.  An absolute result.  We arrived at 9.30, my taxi arrive late, but it did arrive and I headed off to Gatwick.  James was told about the local pub and he headed off there … it was dog friendly and Oscar was the star of the show AND there was live music playing all afternoon … J only left as he had to give Oscar his dog’s dinner.

My dinner was with the ‘Girls’ and families in Chiswick to celebrate Gill’s birthday.  Only Bron knew I was attending and as I’d had a motorway closure en route, I arrived late and made the big surprise entrance.  Really lovely to be able to chat to the girls, as I’d been too busy at J’s 70th birthday party for more than a passing word. 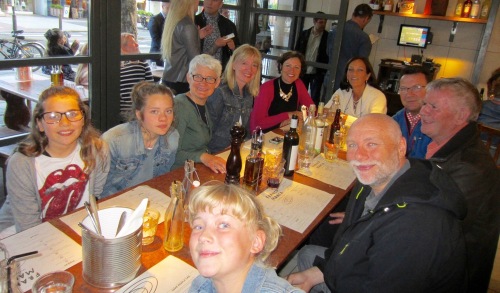 Knowing Maddy is NOT an early riser, I had time to rung amongst some of our ‘stuff’ stored in the Aged P’s attic.  They are in France at the moment, and again, I was able to use and abuse the house! Don’t tell them, but I actually put the heating and water on so I could have a shower!  I’ve made an inventory of our guide books, so I know what to order for the coming summer and the big Balkans trip starting in October, and I found some of the maps I wanted.  I returned the house keys to Clare and grabbed a coffee … Louis is now driving!

Maddy and I had an indifferent pub lunch and then went bra shopping … how is it daughter’s always manage to come away with something???  A late flight back and taxi to join James and Oscar … James had lunched at the pub too today … but no live music. 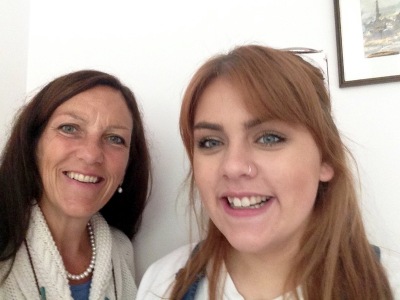 Sporting a new fringe, but she really does look more like David than I.

A slow and wet start to the day.  And we headed off to Whitehead to do some motorhome services … the water should have cost £1, but the receptionist told us to use the other free hose, nice of her.

We plan to potter around the 9 Glens of Antrim for the next couple of days until our ferry on Thursday 25th.  We stopped at the Glenarm TIC and avery helpful chap issued leaflets and gave advice on where to park Jez, even showing us exactly on the pix on his phone.  We did the red squirrel Walk in Glenarm Forest.  The TIC chap told us that the fish sculpture had been stolen and has been spotted sporting new white paint in someone’s garden.  He’d reported it to the Police who said they could not do anything as it had not been notified missing.  So he’d had to go to the council and get them to report is stolen!  An easy 3.5 km walk through trees and along a river.  The bluebells and wild garlic are just coming to an end. 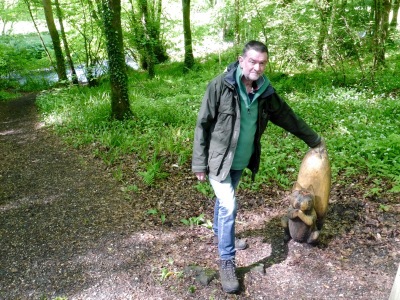 We didn’t see any squirrels other than the one J is leaning on. 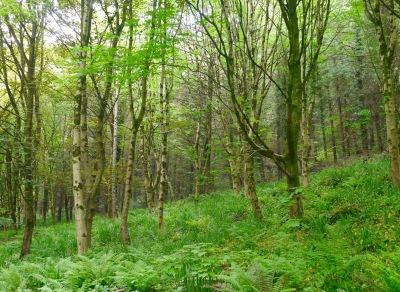 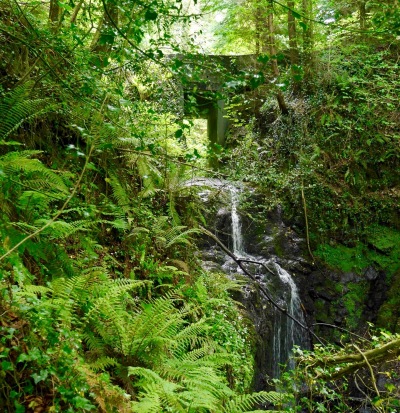 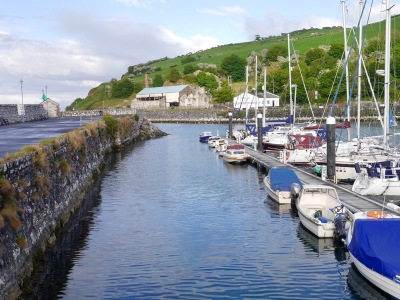 Glenarm Harbour where we overnighted. 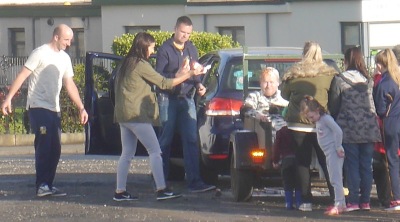 Spotted in our car park.  A wedding ceremony ritual?  Chap and bride to be arrived in the back of the flatbed with horn honking …. only to be covered in flour, eggs and ketchup!

We stopped at a lay-by on the way up to Glenariff to walk up to the Hidden Village – another recommendation by the chap at the Glenarm TIC.  The Village has long been deserted, bar one house that obviously collects its water in a water butt.  What a fabulous location. 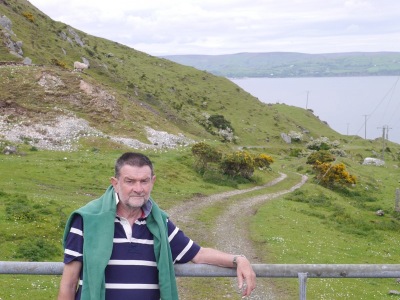 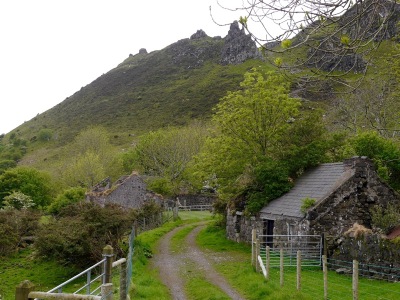 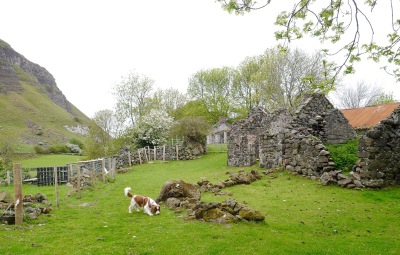 We parked at Laragh Lodge, a cafe / restaurant … another top recommendation, to save paying the £5 per car at the main car park … not sure what Jez would’ve been.  Over lunch we got chatting to the owner … we could stay as long as we liked … he even offered us a hook up.  We ended up having both lunch and supper there … fabulous sea bass with asparagus and a couple of very strong Irish coffees.  During the afternoon we did the waterfall walk.  We reckon this is possibly the best non coastal walk we’ve ever done in Ireland.  Just stunning, especially this time of year.  Progress was slow as I kept stopping to take pix!  And at the end we got a view of the sea.  This area of Antrim is just stunning, but is overshadowed by the well known Rope Bridge and Giants Causeway.  Incidentally, one muppet (being polite) has tried to cut the cable of the rope bridge and the National Trust has had to close it losing a lot of revenue! 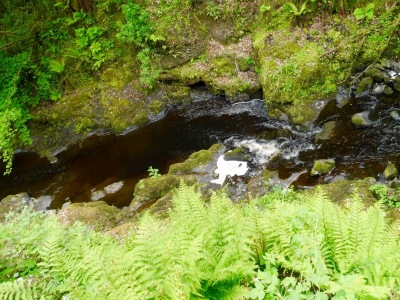 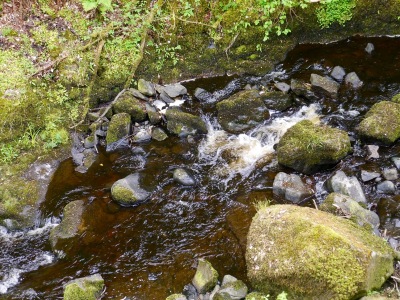 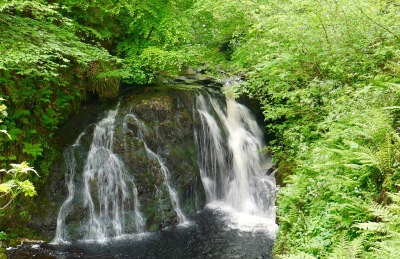 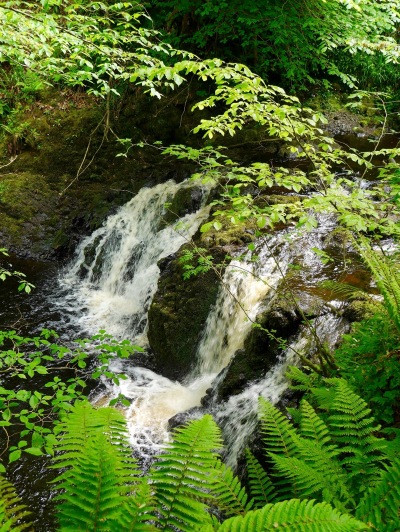 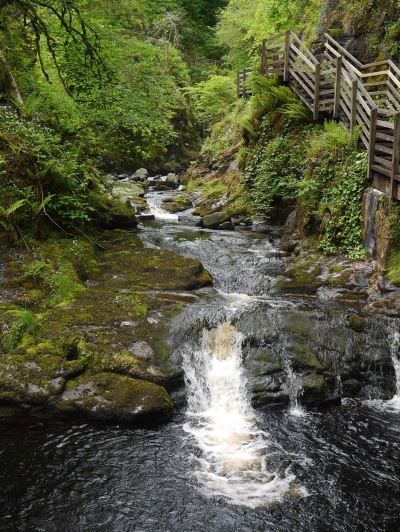 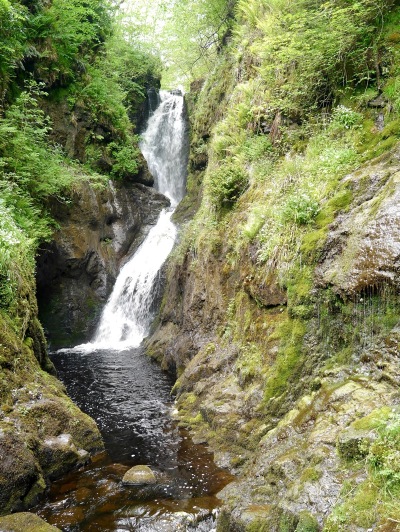 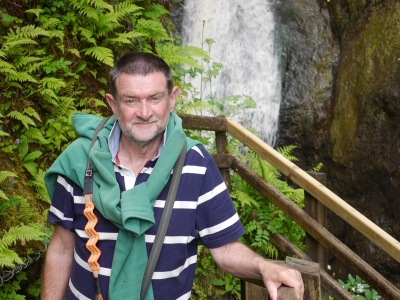 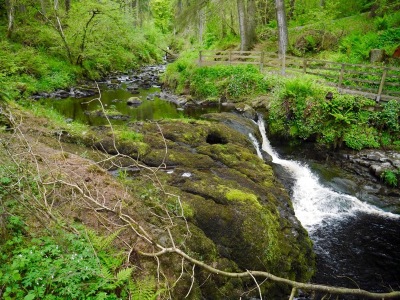 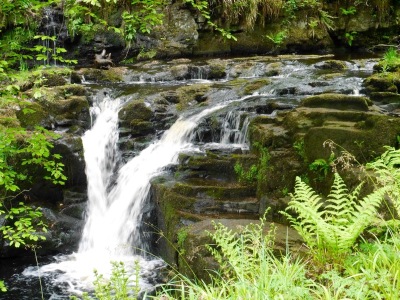 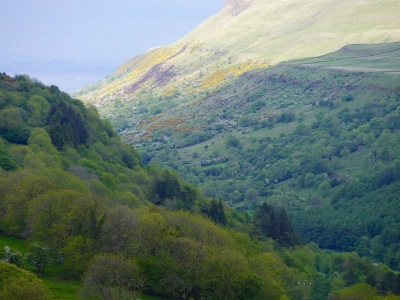 A longer walk this morning from our Laragh Lodge parking.  This took us steeply up the opposite hill, around the head of the valley and down the waterfall Walk. 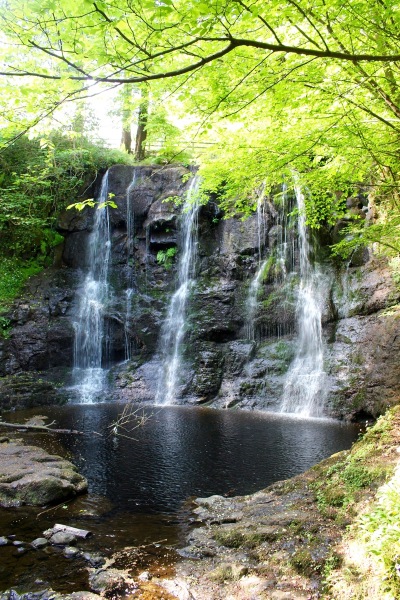 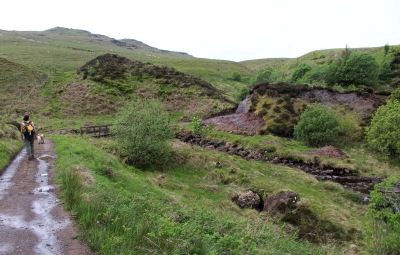 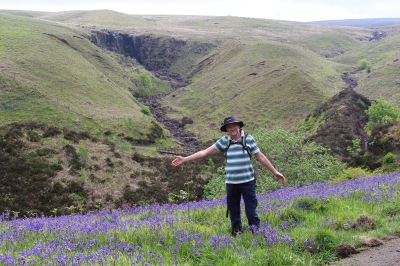 Spot the Belle amongst the bells! 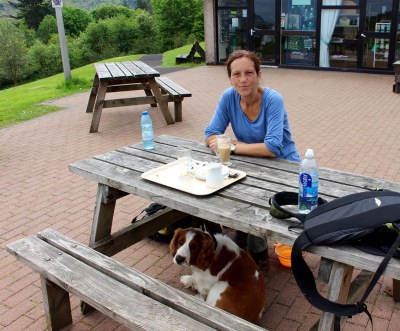 We reluctantly returned southwards towards Belfast as we would happily have stayed on a Laragh Lodge and walked for the next few days.  A stupid o’clock ferry the next morning at 0330hrs … i must’ve been on an economy drive when I booked that one!  We returned again to a council run aire by a golf course and showered and refilled water etc.  Antrim is most definitely on our ‘must return to’ list.