We used the beach shower to fill with water as Mother did her daily fast morning walk.  She’s done more exercise than James or I!  We were 10 mins from setting off when a chap from the hotel behind asked us if we could move Jez … the new guests had complained about the van blocking their sea view and we were much higher than cars would be.  Can’t resent this, as they are probably on a week’s precious holiday and had paid for a sea view … not the not so clean rear end of a grey van!

This is the view we were blocking the hotel guests from!

The Aged P’s flat was behind and to the left of Rentacar.

I drove the hire car with the Aged P’s and J followed in the van. Don’t usually like driving in convoy, but the roads here are pretty empty and the larger ones have an extra half lane so the slow vehicles can allow others to overtake … which they do despite bends and double lines in the middle of the road.  We’d planned to picnic lunch as Aryiroupoli, but got there earlier than expected and as we parked up Jez, a restaurant owner was concerned that we would park where his customers might like the shortest walk to a meal at his establishment.  He must have been expecting coach loads judging by the amount of meat barbecuing.  No, just staying for a few hours and (as and appeasement), was he serving coffee?    There are two parts to Aryiroupoli, predictably, Lower and Upper!  The Lower has Springs, water flowing trough loads of channels in the restaurants and further down.  The Upper consists of a small village centre with a few shops and some Roman mosaics.  Good olive oil products shop.  We didn’t even stay a couple of hours in the end, as the rain came down … so we set off again for our south coast destination.

Home for the next 6 nights was a very small hamlet with a few restaurants with rooms and a small, but well stocked shop.  The Aged P’s were staying in a room at the latter.  It is a bit off the normal tourist trail (good!), being known to locals and overseas regulars.  Friends of ours have been coming here since 1980; one of the restaurants lets them empty their black waste in his toilet and another washes sheets and towels for them.  Food in the restaurants was super tasty and inexpensive.  A really restful place.  However, we did day trips out! 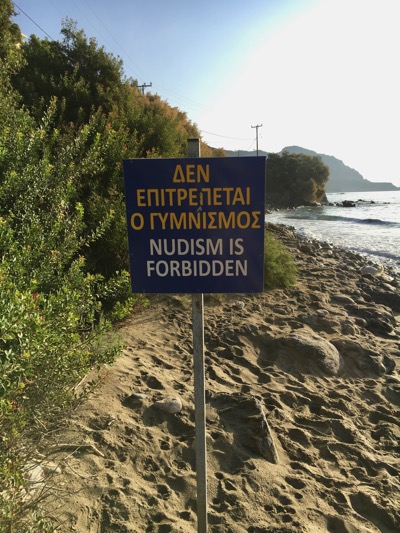 Apparently this was ‘erected’ as a German kept getting his tackle out! 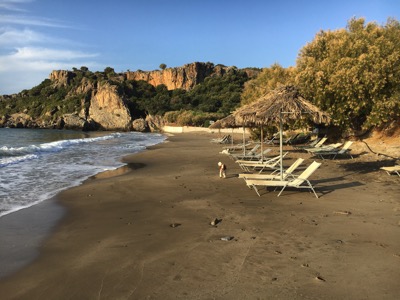 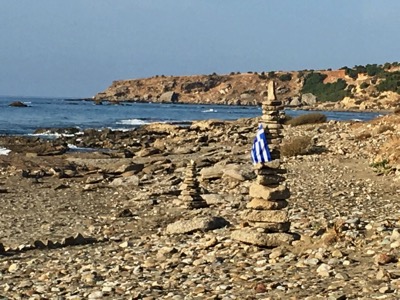 The next beach along.  Lots of cairns.

There are two monasteries.  The old Lower one had been destroyed a number of times and the Monks finally moved into the new one about 50 years ago as the upkeep was difficult.  There are now only 2 monks in the Upper Monastery.  The guide at the Lower Monastery explained that there are too many tourists and not enough meditation time at this location, so monks tend to go elsewhere. 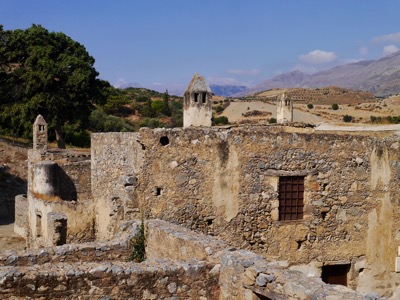 A short drive to the Upper Monastery … a large car park with an H painted on the tarmac for helicopters.  A number of coaches at this one. The buildings were not remarkable, but the history is.  During the wars of independence again the Turks, some of the Monks actually took up arms and there are pictures of gun toting monks in the old monastery museum.  Although they did not fight in WW2, they were active in aiding the Allies.  After the Battle of Crete was lost, thousands of Allies headed south through the gorges.  Preveli hid a lot of them and then assisted them onto a submarine.  They first effort was so successful, a second was attempted, but by this time the Germans were wise to it.  They raided and ransacked the monastery.  A number of the Monks were arrested.  Intervention by one of the Bishops had them released, but the head Monk had to escape to N Africa, sadly only dying a few days before the end of the war.  The monastery continued to support and feed soldiers and the residence.

The main relic of the Monastery was being held by a Monk in the church and kissed by the coach passengers … a Cross.  The story about this cross is fascinating.  It had been captured by the Turks at the end of the C18 and sold to Genoese sailors, who later happened to be passing by.  Their boat stalled, if boats can stall?  It wouldn’t move, so the superstitious sailors returned the cross to the monastery.  Then the Germans tried to fly it to Berlin, but the plane had a fault and would not take off.  They changed plane and this one also refused to budge … so the cross was once more returned to the monks. 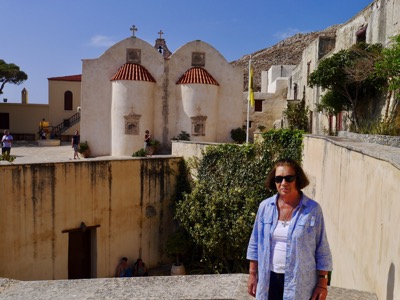 Many of the evacuated soldiers were from New Zealand and Australia and have donated / paid for monuments expressing their thanks.

Picnic view … this south coast is stunning with mountains and gorges running right down to the sea. 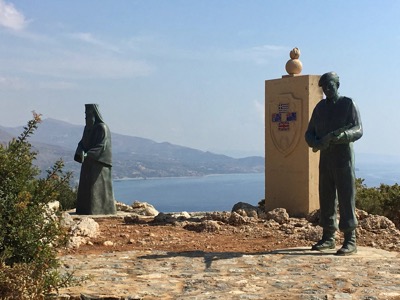 The monument to the monks and the Allies.

Coffee and ice cream back on the deck at the Aged P’s accommodation.

Frangokastello is a great coffee / lunch stop.  Good beaches if that’s your thing.  The castle 1371 is fairly impressive, built to protect the Venetian occupiers from invaders and pirates, but now just a shell.  Being badly restored at the moment … a few workmen slapping on non matching mortar and therefore not open to visitors.

After coffee we headed up a gorge to Kallikratis.  The guide book described the road as ‘the steepest, most winding and spectacular in Crete’.  So it had to be done.  A friend told me that she remembered it being built and had driven it before it was widened … coming down the car bonnet was over the edge of the drop.  Going up was much easier, aided by the fact we didn’t meet any other traffic until the top, and we came back a different route. 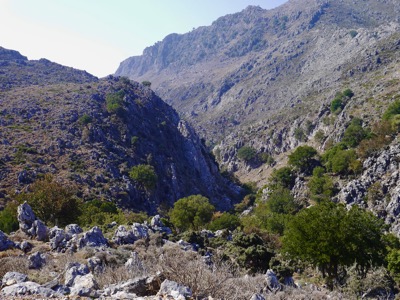 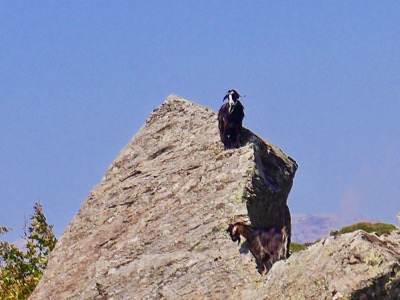 Local inhabitants tormenting CO2.  How do they get up here?

Plakias is another holiday destination, with a good number of restaurants and bars.  However, all the buildings are low rise so it has not been spoilt.

Don’t know how or why this van had made it into the water. 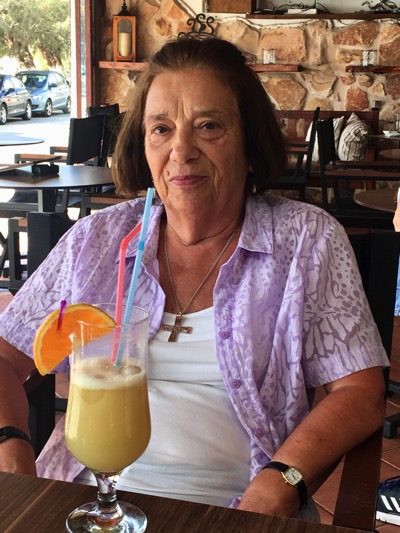 We had ice creams, but Mum had a Pinicolda!  She could taste the copious alcohol in it … yummy … for her.  No taster sips for us, as we are still battling through Sober for October. 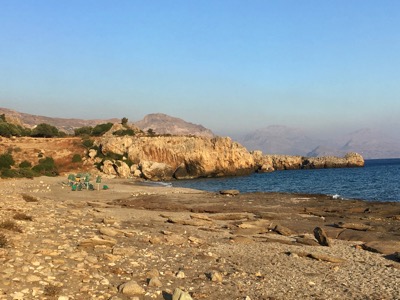 Chora Skaflion is the capital of the region, but is relatively small.  Growth has been restricted due to the surrounding mountains.  Busy with a coach park and a nearly full paid for car parking … EUR3 per day.  We arrived, coffeed, walked around and then sat on admiring the small port for and ice cream.  Not one to break a trend, Mum had another booze laden cocktail.

The waterfront with wall to wall restaurants.  The fresh fish on display looked good … but we have a picnic.

Whilst we ate ice cream, we watch this trip boat fill up.  Surely it is a bit top heavy and the wind was blowing!

We drove up the main road from Chania to Chora Sfakion, which goes along the Imbros Gorge.  This is the second most visited gorge and even at this time of year there were 4 coaches parked up at the bottom waiting for their passengers to walk down.  We established that a car (taxi) to drive to the top of the gorge is EUR25 … I may do this when James flies to Dublin in December.  As we climbed, the mists came in and views diminished.  It was also much chillier, so we almost descended the whole way before we picnicked.

Did I mention the wind … we had to hold everything down, even the food.

Goat Gate:  Oscar does like a stick and brought this one home after a walk.  He left it in his bed, where Corrie found it.  She has a habit to shred sticks, so I grabbed it to chuck it out … only to discover it was part of a goat’s leg, with hoof attached.  YUK!  But what happened to the rest of the goat?

Our last full day with the Aged P’s :(.  We had a coffee on the deck at their accommodation and then we went to the taverna on the neighbouring beach.  Ordered a few meze to start and then ordered some fresh fish.  We’ve worked out that to make the meal last, order the courses as you want them.  The two large fish, bream and sea bass, were just beautifully cooked … double yummy.  The Aged P’s managed to NOT hold back on the booze front … whilst we are STILL dry for Go Sober for October.

A drive up to Chania Airport for the Aged P’s to catch their flight home.  Gonna miss them lots.  People seem to think that having one’s parents around for 11 nights would be a chore, but they are such good company.  More of a chore for them, I suspect!

We headed back south through the White Mountains, but a bit further along the coast east … to Kokkinos Pirgos.  We walked along the beach to the restaurant next to the small harbour … but flavourless and expensive off a huge tourist menu. Worst meal we’ve had so far.  Shame as fab location.