Drove into Sonderborg and had a wander down the town.  All very neat and somehow Danish!  Decided against wandering around the caste (Slot in Danish) and to drive north in the district of Als to Nordborg.  The very helpful Tourist Information ladies has supplied us with a booklet on the area, a selection of bike ride routes and a car park time; the latter essential to avoid a DKK500 (£50) fine: you set the time as you leave and make sure you do not outstay your welcome depending on the permissible number of hours.

Parked opposite the Nordborg castle, and set of on the 27 kms bike ride, around fjords and lakes.  Gentle rolling hills, pasture and arable land and woods with spring flowers.  Changing scenery with water, creeks and woodlands.  Being April an abundance of wild flowers. 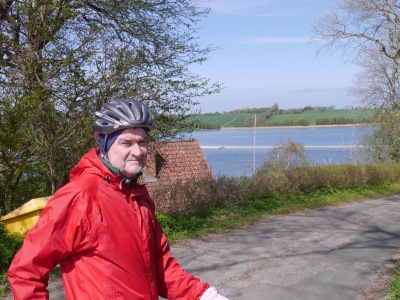 Stumbled upon a gathering, so we stopped and asked what was going on…. a third lake in the area had been reclaimed from farmland and the mayor or Sonderborg was going to declare it open.  It would have been rude not to stay when invited to, especially as the sun was shining and there were free sausages and beer on offer!  Being a wildlife haven, it was appropriate so many arrived on bike. 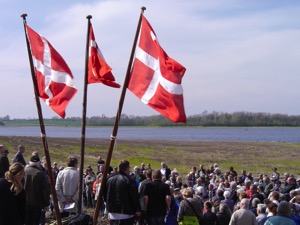 Moved Chardonnay to a truck trailer park (trailer trash???), 2 mins from the castle and wandered up the high street for a local beer.

Saturday and a VERY important birthday

A very happy birthday to Maddy Munchkin – sweet 17.  Can’t believe she will soon be learning to drive – she has such a young mother!  Thought about her a LOT today … missing her is the biggest bummer of this trip.  Thank goodness for texts, calls and Face Time.

Drove to Odense on Funen Island via Grasten Palace, where the Queen spends 3 weeks every summer:  nice gardens and water features, more like a pleasant country house than a royal palace … sure she has many others!  Impressive blue ceiling church.

Stopped for lunch in Kolding.  Attractive C15 castle with a square turret.  Lured by a crowd and music, so we went to investigate.  Youngsters doing super dance performances.  We watched for a bit and I said to James, that as we are out and about and have the time, it was another lucky moment, just like the reclaimed lake opening of yesterday.  In the Town Square, we came across another crowd.  Five young men (!) doing an eating competition, as much rubbish such as chips, onion rings, coke etc, in 30 minutes.  Two were already looking green and heaving in air, so we moved on.  Amazing what you stumble upon!

We really like Danish efficiency and cleanliness.  Rolling countryside, not spectacular, but very pleasant.  Used the great little app called Parkings to identify which Motorway Service stations have Motorhome services.  We pulled in and immediately saw a bin, chemical toilet, tap and grey waste points – all immaculate with multi language instructions.  Welcome Break, it was not.  The UK has a LOT to emulate.

Across the Little Baelt (James gave a running commentary on the construction) into Funan and to the outskirts of Odense.  Used the Parkings app to identify free space outside a Caravan sales showroom.  Very quiet, even though the Belgians, who have parked up next door, have a TV on …. grrr … about to drown them out with Bach.  No will go British, Elgar!  Pomp and circumstance, no less!!!!

Spent most of the day driving up to Makkum, where Sinead is working and a super yacht which is being re-fitted.  It is reached via a man made causeway of about 18 miles, creating a mega lake.

Slight comms problems as J’s phone decided to NOT work in Holland so we could not let Sinead know we had arrived, but she found us.  Drinks in Chardonnay with her colleagues Joanna from Oz, and Dave from Wales.  They left us and partied on in the village centre.

Thought about a bus or train to Amsterdam, but looked like it involved many changes and about 3 hours and did not fancy a 1.5 hour drive in.  So trying to start off as we mean to and do some exercise at least every other day, we set off on the bikes.  How hard can a bike ride in Holland be?  All flat and cycle paths everywhere. Going out was fine, then James spotted the wind was WITH us…. it certainly was AGAINST us on the way back; it was a real struggle.  So cold we bought a coffee in Hindeloope and then stopped for a flask coffee to break the journey back.  Only 20 miles and we were quite knackered… it is a start.

The air by the camping has everything for the EUR 7 fee:  immaculate toilets, showers, water , washing machine and chem loo so we availed ourselves of everything.  I am now buffed, plucked and polished!  Walked into Makkum town: very pretty and bedecked in bunting for Anzac day celebrations. 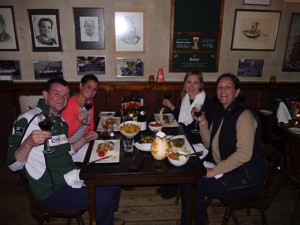 Sinead, the very lovely Melissa from Canada and us went into Makkum for a superb fish supper – a really lovely evening and thank you S for paying for us.