We headed down to Plakias for our last tripette before leaving Crete.  Parking was along the sea front, and it was WINDY …  later that evening we moved into a half empty car park so we could get some sleep and moved back to the beach the next morning.

A few apperatif’s in a bar and we posed the question about whether the TV could be tuned to the weekend’s rugby … come back tomorrow and ask the owners.  Supper was at a new to us restaurant in Plakias … the 83 year old mother sat and gave the old instruction to customers – choose a table closer to the fire, and to her middle aged sons – one waiting table and the other in the kitchen.  Great food.

The wind blowing the white horses.

Hot beetroot with mash and oil … one of our starters and we shared a chicken dish after.  We were even given two yogurt puddings and two bottles of raki … hic!

On arrival yesterday, the wind had wrenched the drivers door out of J’s hand, causing the door to crack against the wing panel … a terrible noise and paint damage.  So we drove up into the mountains, and along another gorge, to a garage.  EUR10 and a bit of brute force and the door hinges and panels had been bent back into place.  And a dab of paint added.

In the bar, we asked about the rugby on TV … yes, the English lady owner would bring down her laptop with her UK TV account.  Grateful we had a coffee and an omelette there for lunch.  Back again later on for a few glasses and a French win.

Plakias beach in the morning with a brief moment of sun …. that threatening sky later delivered all it promised.

But the sea was truly an amazing colour.

I only went a few steps into the tunnel as it was too dark … apparently coal used to be moved along here.  I know the Germans used the caves for storage in WW2.

A local dog from a Plakias hotel led CO2 and I on a walk to Ammoudi Beach … I suspected he’d done it a few times with hotel guests.

Back to ‘our’ bar for the England and Ireland game.  It’s not often J and I are on opposing benches … delighted to see England finally find their form, however, France have most people’s money for the Tournament.  Geoff, who I’d met in Mili Gorge a few days ago (and wondered if he’d made it over the land slip) arrived in the bar during the game and then joined us at the family restaurant we’d been to two nights ago. 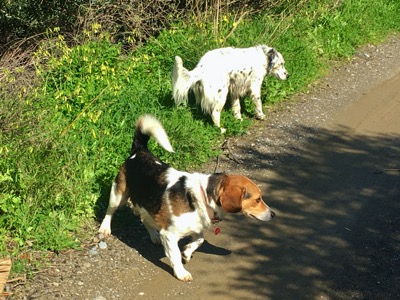 He led the way, but didn’t want to play with either of CO2.  On the return, he shot off back for home, but gave a little bark as we passed by, as if to say, what took you so long?

View back to Plakias.  It is a low rise seaside resort with a long (windy) beach … pretty enough, but not much to hold you. 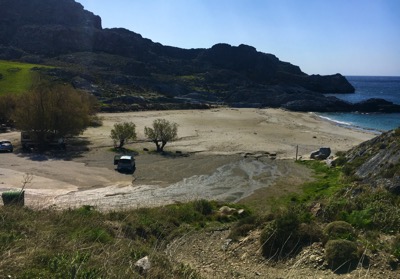 Ammoudi Beach … would have made a good wilding spot … with a couple of permanent caravans, but the rugby held us in Plakias.

We walked from the ancient Greek / Venetian bridge, by the old Prevelli monastery along the top of the Prevelli gorge.  This part was easy walking … it got more difficult coming down the rocky path, if you can call it that, to join the steps down onto Prevelli Beach.  We planned to wade the river and walk up the other side, but as J sat down to remove boots and socks, the 3 resident geese charged over with the necks wings outstretched and attacked James, sat on the sand.  Another walker had to beat them off of James with a stick, but not before he had sustained a bite to the ankle.  Geese are known to be as effective as a guard dog … and we can concur, they are as scary.  We therefore decided have our picnic with CO2 guarding us from the geese and return up the way we came.  The negative was the climb back up the steep path, but the benefit was that we were in the sun the whole way back and the views on that side were better.

Bridge at the start of the walk … could have been a less windy overnight parking too. 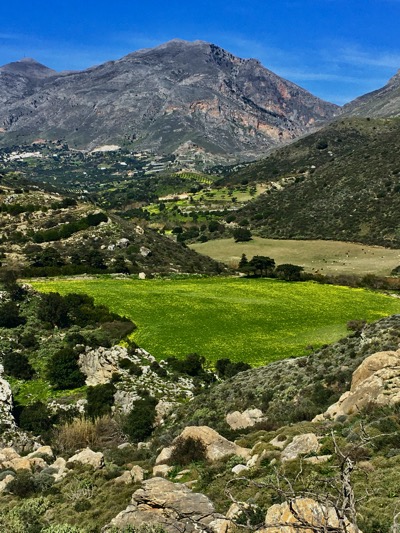 First signing of the famous Prevelli Palms.  Lin, our all things Crete sage, told us that there were all burned about 10 years ago, but no signs of that.

1454-55: Back to Kalives for Jobs and Another Farewell Dinner

We arrived back in Kalives late morning.

As part of our getting back on the road, there’s a pressure to get everything straight first, so we cleaned and polished the outside of Jez, including getting on the roof.  Cleaned the inside and outside of the AndyPandyCar prior to returning it after 4 months of abusing it!  Some admin.  I also collected all the ‘stuff’ I want to take on the flight home … and had to head to the Chinese shop to buy a EUR15 holdall.   J on inside Jez cleaning whilst I took 5 bagfuls of laundry into Chania.  Lunch at the Souvlakerie on Thursday, which we not been to before … a couple of glasses of vino and Lars walked past … so he joined us.

We saw him again for supper Thursday evening, in what is definitely one of our favourite restaurants … 3 Cooks in Stylos.  We were joined by June & Karl, Julia & Anthony and Sue.  Far too much food, but we managed to nostimos our way through most of it.

We returned the last of the Greek gas bottles, which had been plumbed in since our regulator issue.  With heating running, they have been lasting 6-8 days and cost EUR18.  Not as cheap as forecourt LPG, but not bad.  The gas shop is also a cava … booze shop, so I supplemented the bottle refund with cash and came away with 5 x 3 litres of wine.  Apparently wine in Turkey is expensive, so we will need to add to our stocks … or go dry!  Coffee at Aris’ Fresh & Cool Cafe and farewell to him … he’s been our Ask Aris.  The latest question was where can we get a replacement windscreen wiper … it just so happened that the chap sat next to him runs a garage in the town, so J took Jez up there whilst I returned the AndyPandyCar.

I was a little concerned that I had not de-doggified it enough and with us having spent so much time locally, he must have known about CO2 …  I’d not mentioned dogs when I made the booking (naughty!).  He gave it  a cursory glance inside and out; didn’t even check that we’d filled with fuel.  When we’d collected Lars the previous evening, he’d said that CO2 don’t smell … another benefit of them not liking water.

After lunch, J rested and I wandered up cardiac hill to say farewell to Ann, who has been a gem.  June and Karl popped down with a tow rope and ratchet (ours had broken when a local tried to pull Jane out of sand in Matala) AND they’d bought hand sanitiser and face masks … generous people.  We have met some really good friends in and around Kalives … only 20 months till we will be back and time does fly.

We arrived at Heraklion in plenty of time and as we didn’t want to go on board 4+ hours before the sailing, we ate the slow cooker supper early, literally sat dock side watching the lorries load.  Sign everywhere stating restricted access, but no one moved us on and I walked CO2 unchallenged in and out of the harbour.

A few glasses in the cabin, a shower and we attempted to sleep.  My slumbers disturbed by the swell and CO2 (mostly Corrie) who had remembered that they’d been allowed on the bed with me on a previous crossing … my mistake!

When asked where is our favourite place, we have always replied here, where we are now … we live in the present.  But Crete has definitely caught us.  It has everything … incredible scenery with majestic mountains, history, gorges for walking and beaches.  Old villages with their cafes and tavernas.  Great fresh food and the most generous and welcoming people.  We are both very sad to leave Crete after over 4.5 months, but also excited to start on the next part of this trip.  A big thank you for Lin and Bo who persuaded us to first visit Crete Spring 2018 … it is our Happy Place.