We exercised.  Swam.  Sunbathed. Read.  Repeated.  Big beach so no worries about the weekend and tourist bodies being too close.  Lovely staff at a mobile snack wagon who plied us with cold drinks, ice cream and J’s burger lunch.

Beach showers used with my natural bar shampoo.  Toilet emptied under the cloak of darkness into the public loos.  A really lovely site.  Only disturbance, other than Oscar barking at passing dogs, was lads arriving for beers at 1.30 a.m. playing loud music. 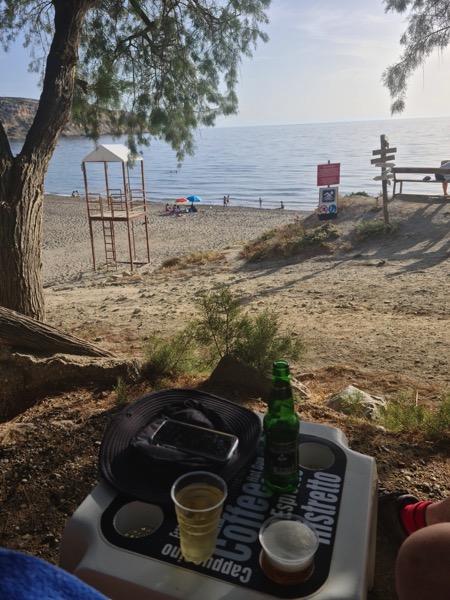 Reward after a longish and warm day. 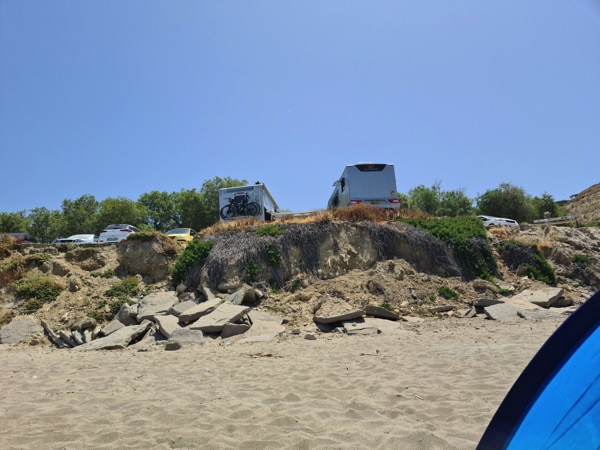 I didn’t fancy another full day at Komos.  Needed a change of scenery.  So we upped sticks, cos we can, and moved to Agios Pavlos, arriving early before the  Sunday crowds.  Snack shack staff asked us to move right into a corner, given it was a smallish car park.  All very pleasant, so we went in for breakfast coffee and a shared plate of humous.  And then for a drink and icecream.  The sun loungers were a tad expensive at EUR6, but the shade meant we didn’t have to erect the kiddies UV beach shelter for J and CO2. 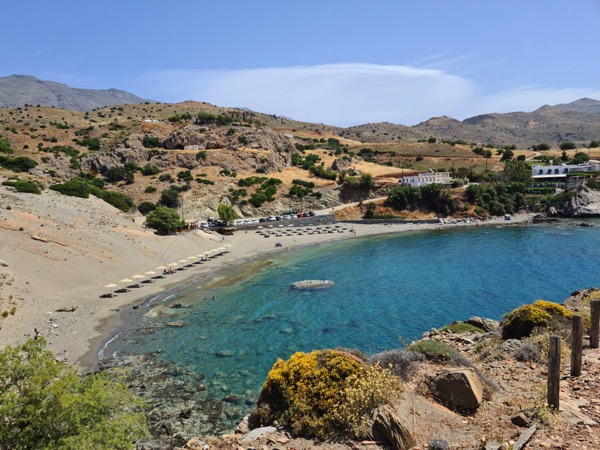 Agious Pavlos beach. Walked up the steps to the cave and over the massive sand dune to the beach the other side.  A really pretty spot. 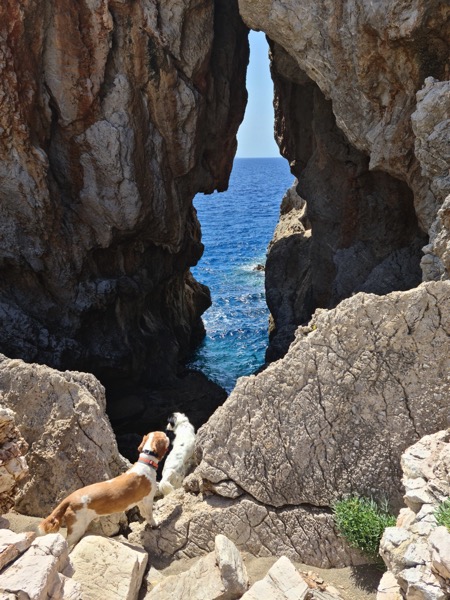 Time to turn back CO2! 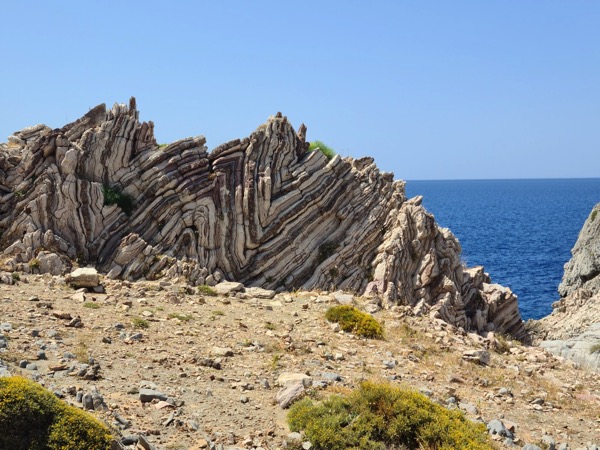 This amazing rock formation was on a boat cruise poster.  We saved £££s by cruising there in Jez. 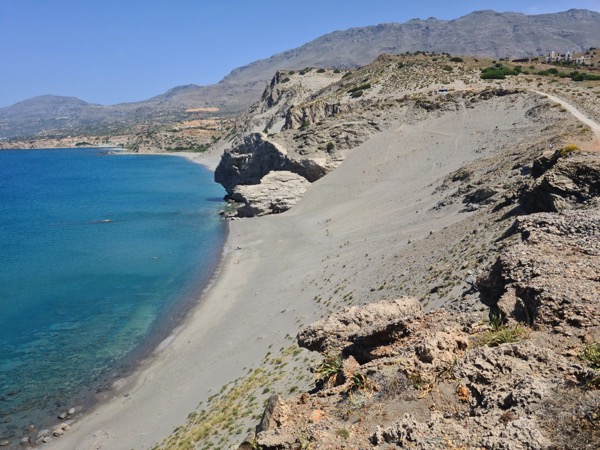 Up some steps from Ag. Pavlos and then over the huge sand dune to another nudist beach. 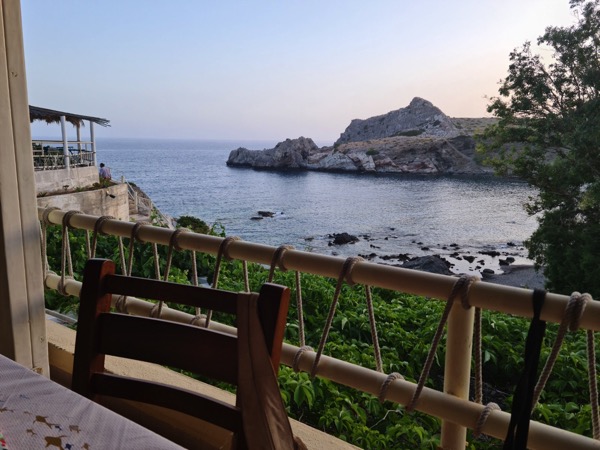 Supper at the hotel slightly up the hill with lovely views over the bay.  Cash reserves running low, so we were relieved to be able to pay by card.

Monday 30th and Tuesday 31st May

We were headed to Triopetra (3 rocks) and long beach, but we didn’t like the look of the shortcut turning … tarmac only about as wide as Jez’s wheels.  So re-routed via the main road adding 25 mins to the journey.  Didn’t like the look of that turning either.  Cobbles and steep … not Jez’s favourite!  We filled with diesel and asked the attendant about the road.  Road good, village at the start is  small and may be difficult.  As the solo driver, I’m a lot more adverse to risking it than I used to be.  Another quick re-route and onto Ammoudi, a recommendation by friend Lin.

Suddenly we found ourselves in Spili.  We’d been here only weeks ago to the Maravel Herb Garden.  The main car park wasn’t too full so were able to stop.  I re-stocked on natural products of bar soap, shampoo and creams.  J had an omelette for breakfast and both had coffees … to 2 bills were EUR 6.60 and 7.00, but the charge was 9.50 … confused.  And we found a bank.  Back in funds.

Ammoudi is very pretty.  A short walk either side to nudist beaches.  A snack shack … already sampled ice cream and a drink.  A few small campers look pretty well installed.  They’ve hogged all the shade under the trees, but we wouldn’t have fitted anyway.  And a taverna just up the road.  A reprieve from the heat of the weekend.  Only 28C today and a cool breeze on the beach.  And bargain sun beds at EUR5.  And reading our blog from a few years ago we had walked here from Plakias and identified it then as a great park up.  We hadn’t stay ed there then as we had an appointment in Plakias to watch a rugby game in a bar.  Great to be able to ‘remember’ what we did by reading about it!

We stayed 2 nights and walked over the Damnoni Beach for supper both nights.  I got up very early one morning to climb to the chapel with views both ways.  The temperatures have generally been 29C by 7.00 a.m., a real feel 33C for most of the day, so reading, swimming and dozing has been the order of the day. Every day. 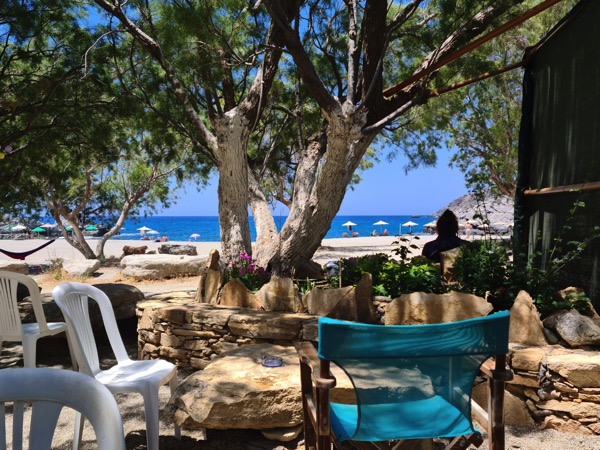 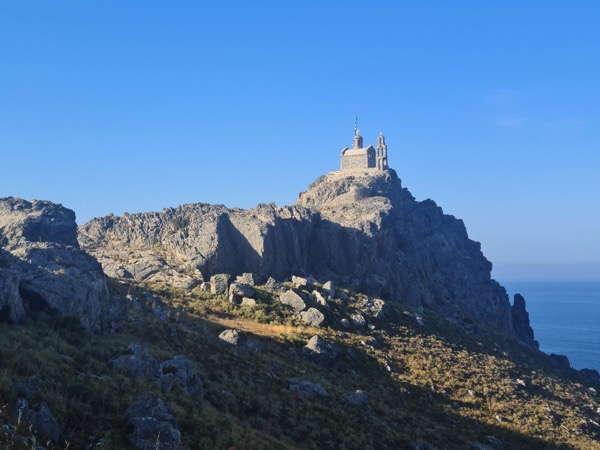 Despite the early start, it was still sweat making.  A few other folk were on the path also trying to avoid the heat. 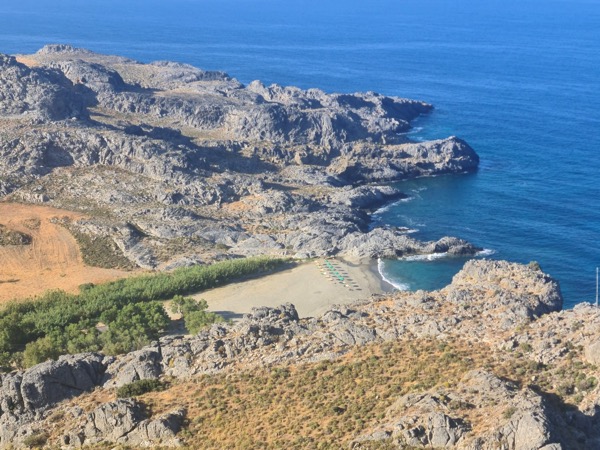 Ammoudi Beach.  Jez is invisible as he’s concealed by the mountain rocks. 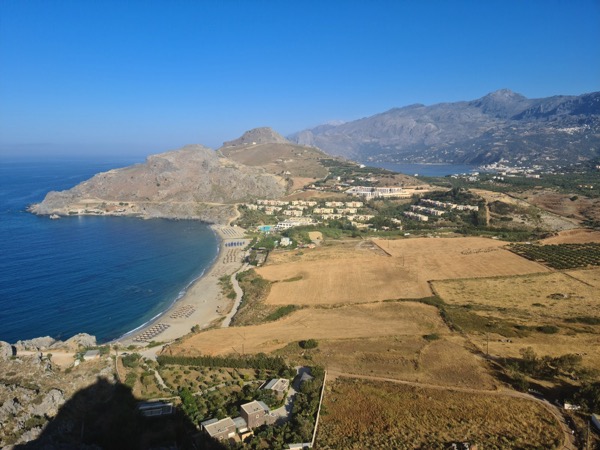 View the other way to Damnoni Beach where we ate … twice. 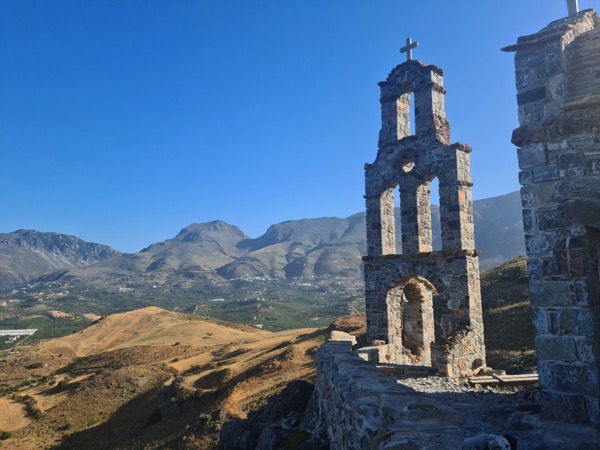 The Summit to prove I made it!  Looking inland 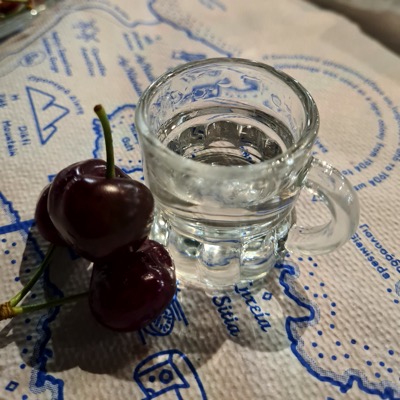 First cherries of the season.  They are grown in the Amari valley, where we started out.

Plakias for the Last Time

We have been to Plakias a few times, stayed and driven from nearby to eat, but always out of season.  We used the sells-everything-supermarket and a butcher.  Parked up and then were asked to move by the Life Guard … the season started today and we could not take up more than one parking bay.  With his OK, I moved us onto a rough area … it suited us as I could angle the fridge out of the sun.  And a bonus was that we were a little distance from the late night revellers loudly wending their way back to the their holiday accommodation …. we still heard them, but at least from a bit of a distance.  We have both agreed that out of season with only a couple of bars and restaurants open is much preferable and have no desire to stay there again. 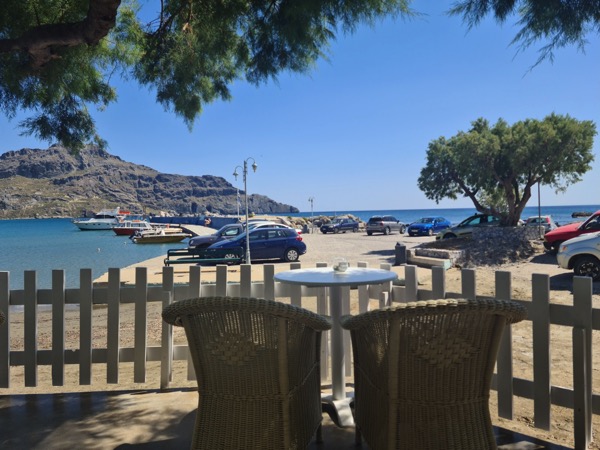 A drink stop in Plakias.  Last time we were here with the Aged P’s we watched a car being pulled out of the harbour.

This is a park up that has not yet appeared on any of the parking apps and we will not be the ones to change this.  We were introduced to Secret Location P by friends Lin and Bo who are good friends with some of the business owners there.  Lovely sandy beach.  Showers.  Great inexpensive tavernas.  It is a special place …. calm and quiet.  It feels healing somehow.  The two days here just oozed by.  Maddy and Jordan are coming to stay from 11th June and to give them some space,we will come down here again in the van.  We think this IS the Perfect Beach. 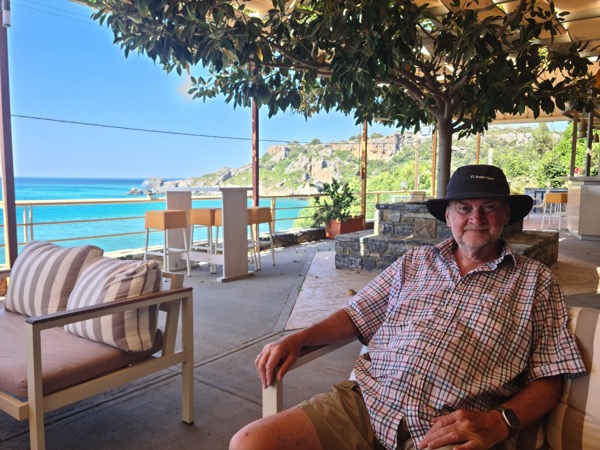 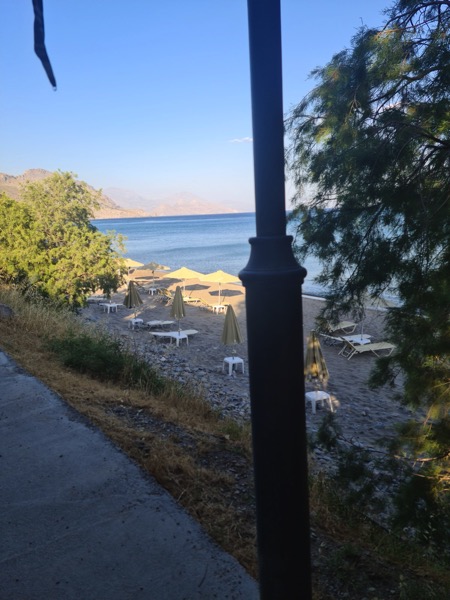 View from the van 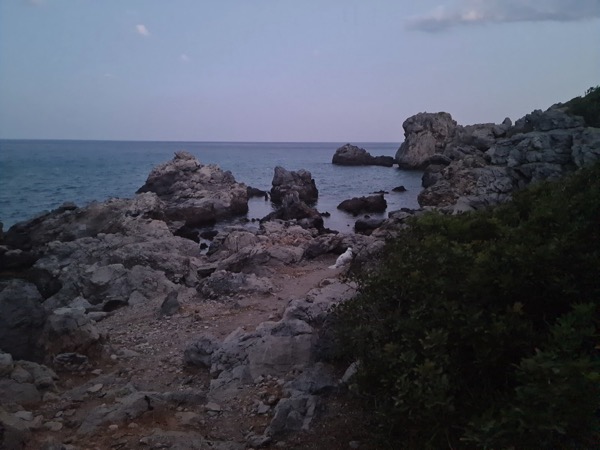 And so back home

I walked CO2 through the rocky undergrowth to the next beach and came back by the road!  J cleaned Jez … not a deep clean as we will back in him in a couple of weeks and before we leave Crete on 2nd July we will wash all the rugs etc.    Swapped vehicles back at the airport parking and returned home to Almyrida.  Feels hotter here as less wind.  I’ve already made my jobs list for the week and made a batch of soup!!!  Our mini holiday was a proper beach holiday.  Not our normal choice but it was relaxing. 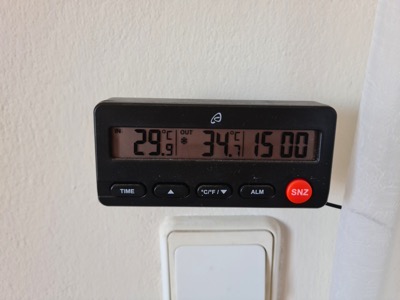 Back at Almyrida and these are the temperatures inside and in the shade!!