I drove Alison to Lisboa Aeroporto at about 8:00 am – turned neatly to avoid a traffic queue on the Ring Road – and oops – it was the Airport turning.  Never mind (I thought) – we will re-route….. we did get to the Terminal Building right on time. Hired car returned – we would drive a Ford Fiesta any time again…

K swung the Jez twin tub into action and the laundry flowed nicely.  We decided to walk to Ikea to buy a clothes rack – why?  Because it’s the Ikea experience?  Now I escaped from Ikea twice in my life – it wasn’t easy – they have this arrow system to guide you to every single department – try defeating it – you need GPS – and balls!!!  We followed the arrows and made our purchase meekly.

A date with Delia and the O’Riain family at a rooftop bar in downtown Lisbon – spectacular night-time views over the City and the 25th April Bridge.  Later for a snifter – a kooky bar where 1960s pop music videos played.

On our return, Oscar was patiently sitting on the dashboard – he doesn’t miss much, our K9.  And the coats were once more on the ground.

Courtesy of K’s Iphone App, we had a walking tour of the Alfama district – wonderful narrow cobbled streets and the real Lisbon life – not totally unlike the back streets of Napoli…

Lunch outside on the street terrace of a small restaurant. I got chatting to an American lady from Denver with an English white Labrador – we talked about the logistics of taking dogs to the USA – she mentioned her dog sitter – whom she called her “dogger”!!!   I just about refrained from enquiring about tasteful ‘exhibitionist’ sites in Denver…  a language problem, doubtless.

Another lovely day in Lisboa… 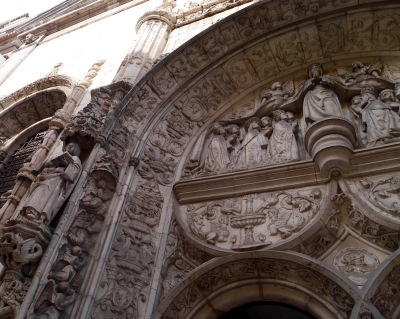 Igreja da conceicao Velha:  one of the oldest churches in Portugal. 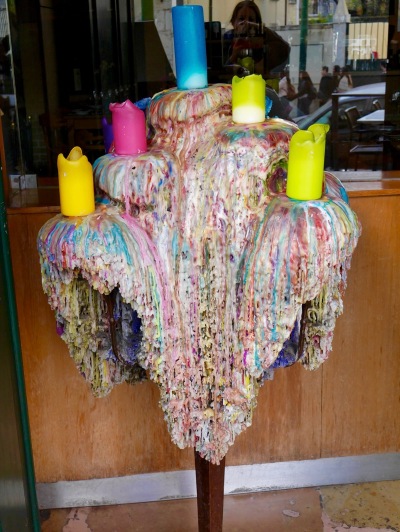 At the lunch restaurant.  9 years in the dripping. 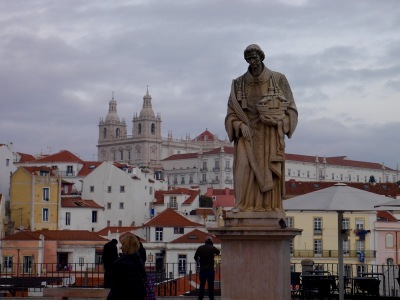 looking across to the Monastery of Sao Vicente de Flora. 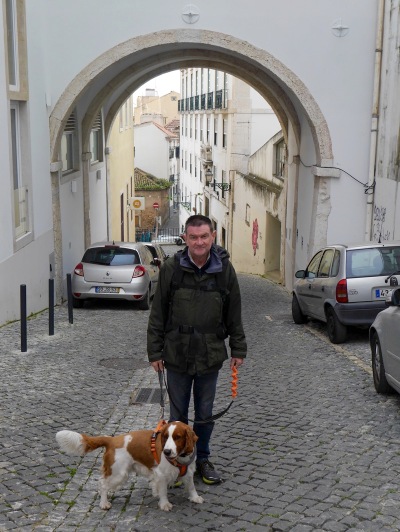 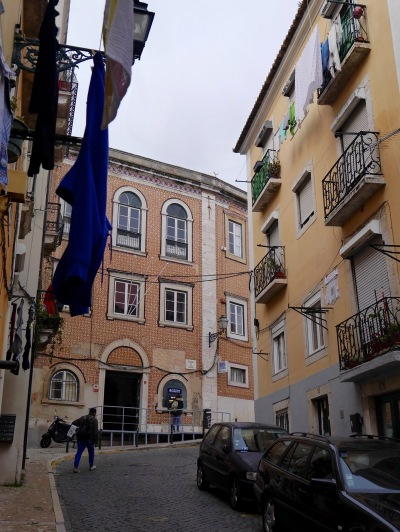 A wider Alfama street, with washing and tiled houses. 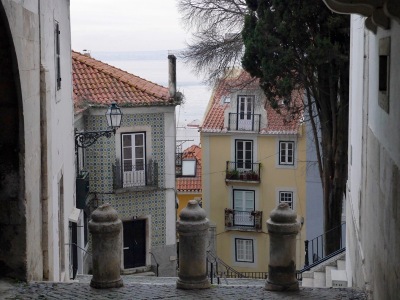 And a little narrower … a lot of steep slopes and steps.

K here … The Church Sao Vincente de Fora was large and not to our taste.  It’s most striking feature was a massive, heavy, dark Baroque canopy over the alter – quite hideous and in the same style as the one in St Peter’s Basilica Rome.  I left the ever faithful hound and James (both ever faithful and patient!) whilst I went into the monastery, which really was worth visiting.  Unfortunately it was too near to closing time, so J did not get to go in. 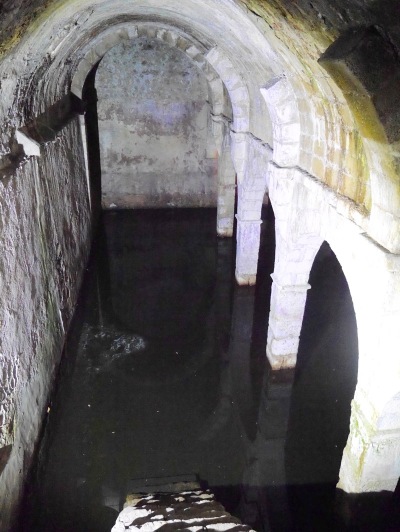 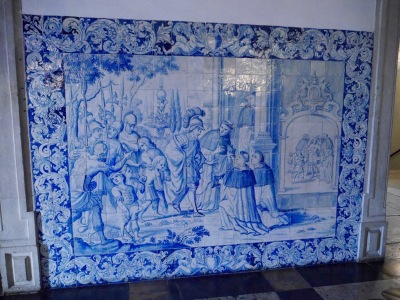 It is known for its blue C18 azulejos in every room and all around both floors of both cloisters. 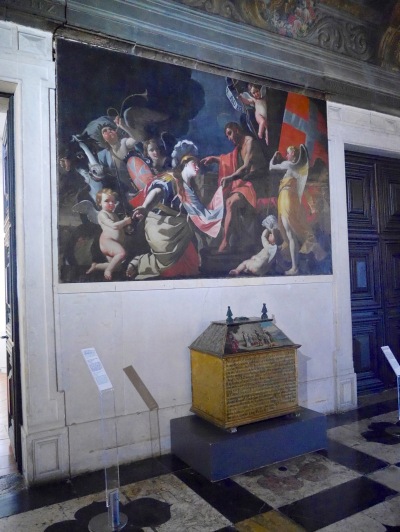 A Reliquary chest contain the remains of 7 Portuguese and Spanish missionaries killed in Morocco in 1585. 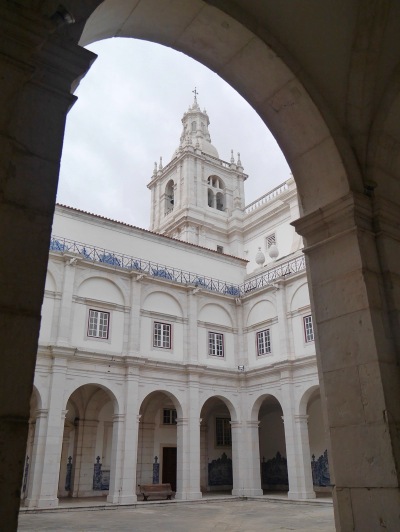 The two tiers of one of the cloisters with the blue tiles. 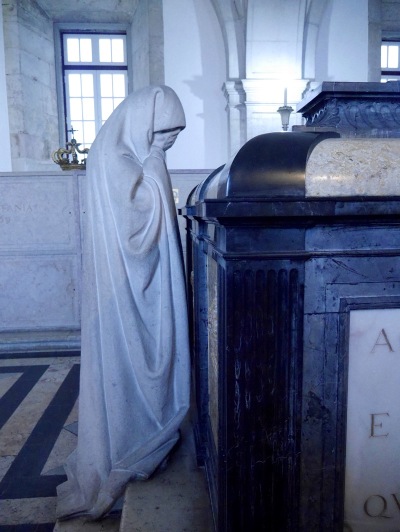 The monastery is the last resting place of the Monarchs of the House of Braganza.  A stone woman praying by the tombs of King Carlos I and his son Luis Felipe assassinated in 1908. 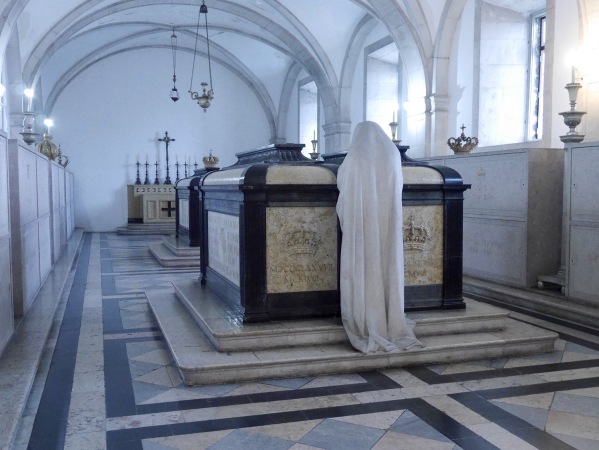 It really gives a WOW factor as you walk into the Pantheon (so I’ve learned that the definition is a group of famous or important people … here all dead!) 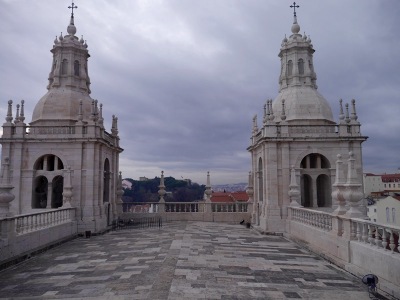 On top of the Church’s roof looking across to the Castello Sao Jorge. 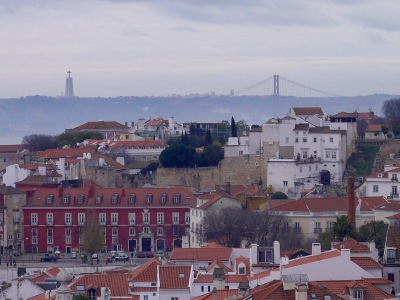 And across to the 25th April bridge and the Cristo Rei – modelled on the Rio de Janeiro one and commissioned 1949-59 by the dictator Salazar.

Barbecue on site in the evening – accompanied by the traditional firedog…

(A little gem of kindness – K was talking to the site security manager about locations for pet shops – Oscar will need a fresh supply of food soon. He immediately offered to order some online from his home and have it delivered to the campsite!  Portuguese people are the soul of generosity.)

Somehow the dewfall migrated from the grass on to the roof and windows of the van – unbelievable!  Or is it rain? The second time in 2 months in Portugal… This led to a slow start and some jobs around our home – to prepare K for her UK Winter experience for the next 2 days – arctic thermals at the ready!

K here.  An early flight at 7.15: flight and train easy.  A quick chat with the Aged P’s as they are resident at Clare and Chris’ house minding the dogs and children (when they are not out socialising – the teenagers that is!) whilst the C’s are off gallivanting under the guise of doing jobs in their French house … yes, I heard about the wine tasting :).  Our car sits on the drive and Dad drives it and services it for us.  He’d even pumped up the tyres yesterday for me.  I know, I am spoilt!   Maddy Munchkin was at work and not expected till 6.30, so I did shopping for e cigarette juice for J, wool for me and food for supper for M and I.  I wallowed in the bath whilst listening to Little Women – an unabridged version and over 17 hours of listening.  I haven’t even got to the part where Beth dies but I managed to add to the bath water level with a few weepy bits.  M and I gorged chicken, chocolate and cheese and watched Maggie Smith in “Lady in a Van” … she really is the most amazing actor.  Went to bed with a sore over full tummy. 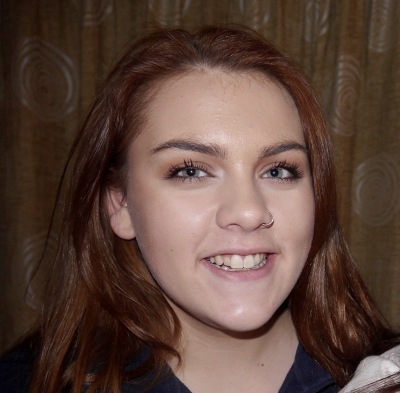 On Saturday we went to the Swindon Outlet shopping centre as I needed a coat that is warm and waterproof and a pair of ankle boots.  I’d worn the old, not warm nor waterproof jacket and old running shoes home so I could leave them behind … forward planning eh?  Between us we managed to come away with a coat and jumper each, a top and boots for me 🙂  And we managed to stay and shop despite the crowds as it was the last day of the sales … we neither of us like crowds.  I stepped away from the £325 Musto bright orange coat … Maddy objected to the colour, which I loved, but I passed on the grounds of it being more suited to arctic weather, which we mostly tend to avoid. 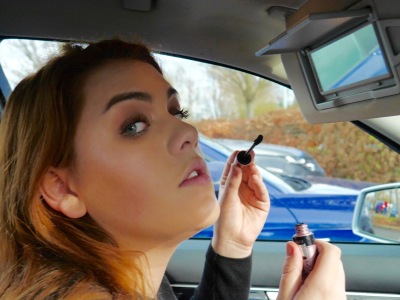 Was it an early start Maddy?

Amazing to have caught the Aged P’s in the country … apparently 2016 saw them away from home 188 nights … they are currently on about 10 days home between S.A. and Las Palmas!

Supper at at Clare and Chris’ house with the dogs … and on Sunday the Aged P’s dropped me at Guildford to avoid the BR replacement bus.  I was back home with “My Boys” by 1.30.  Great to see Munchkin and the Aged P’s, and good to be home again.

A pottering afternoon.  Full justification in bringing a twin tub with us … forced to use the campsite laundry as rain threatened and air damp .. two loads and each was a staggering EUR7.40 and drier 4.10!