Oscar on the dash the night we were out … he watches for our return.  Our worry now is not so much that he might act as a guard dog, but that we’ll come home to find a broken window and a missing hound.

James had made contact with the MD of the Lisbon crossings for a visit, so we had separate days.

I had met Firmino Sa a number of times during my 15 years as GM/CEO of Severn River Crossing Plc – I emailed him in the hopes of a Bridge visit. We arranged it for Monday and K, O and I travelled in to the massive Expo site – more about that below.  Firmino and his colleague Jose took me on a tour under and over the 17 km long Vasco de Gama bridge – hugely impressive structure and pretty identical to the Second Severn Crossing.  A tour of the Lusoponte offices and Bridges Control room was followed by lunch in Alcochete – a superb restaurant and the most magnificent fish dish Groupa – 4 courses and good chat about old friends from the worldwide bridge community – sadly some no longer with us.  Firmino has promised me contact details for the folks at the Rion Antirion Bridge in Athens for our planned trip next Winter.

Using my phone walking App I explored the site of Expo ’98.  Our taxi driver told us that before the Expo there had been nothing there and after the businesses kept on coming and building.  J and I parted at the station and met up 4 hours later outside the massive shopping mall.  Oscar had a fine time, as he was mostly off the lead and I had a fine time taking pix … so apologies there are so many! 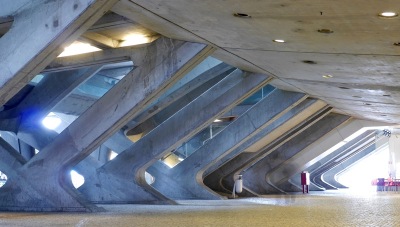 Ground level of the Gare do Oriente: one of the world’s largest transit stations and the busiest in Portugal with over 75 million passenger annually.

Gare do Oriente:  The roof is made of steel and glass and the design resembles a row of trees.

Gare do Oriente:  It is designed to keep cool in summer.

Looking across from the Gare do Oriente to the shopping centre … I love all the lines and curves.

No idea what this structure is supposed to represent, but it heads a very long line of what must be all the world’s flags.

The Vasco da Gama Tower was opened on the 500th anniversary of Vasco da Gama’s voyage to India and in time for Expo ’98.  It is 145m tall and the shape resembles the sail of a Portuguese Caravel sailing ship.  Much of the Expo ’98 architecture celebrates the Portuguese naval heritage.  The hotel was bolted on after.

The Vasco da Gama bridge was inaugurated at Expo ’98.  The longest bridge in Europe and the 9th longest in the world at 17.2 km long.  In the mist, it disappeared into the horizon. 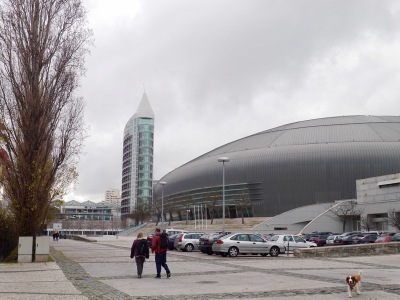 The round space ship structure is the MEO Arena with a 2000 capacity and the largest indoor arena in Portugal.  Used during Expo ’98 for Oceans and Utopias … ocean themed artistic, scientific and historical exhibitions. Now use door concerts and sport events.  Spot Oscar loose. 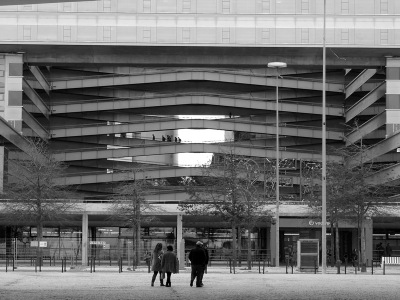 The side of the Portugal Pavilion. 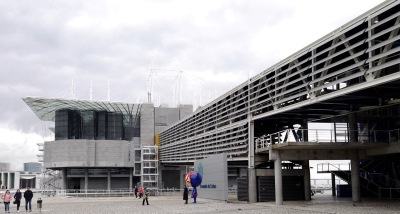 To celebrate the relationship of Lisbon, Portugal and the sea, the Oceanarium was built for Expo ’98.  It is designed to resemble an aircraft carrier! 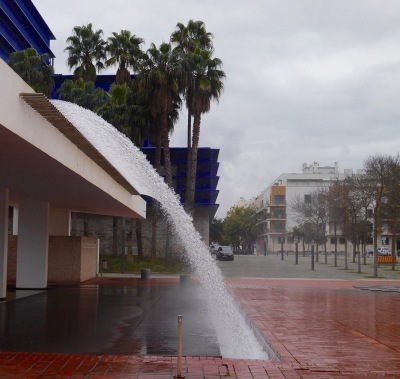 The Wave with engravings of sponsors outside the Marina. 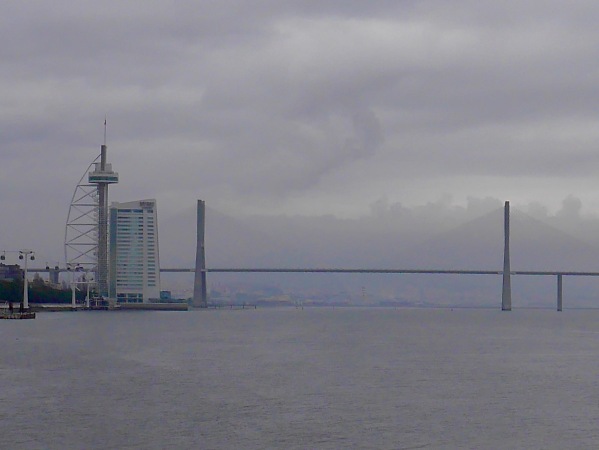 Another view of the V da G tower and bridge.  The dots on the left are a shore side cable car … I checked … no dogs, ice creams or drinks! 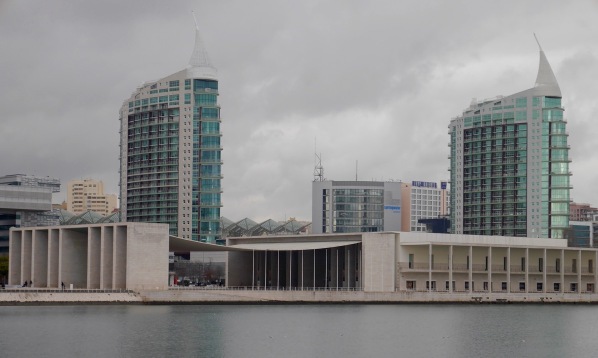 The Portugal Pavilion.  The sagging roof was intended (not poor workmanship!) – it is symbolic of billowing sails … that nautical theme again.  It weighs 1,400 tons, and has an area of 167 x 223 square feet.  Since Lisbon is earthquake prone, high density cables hold the roof in place as well as other support systems. 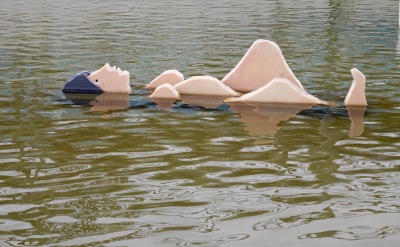 Not really the weather for bathing!  And certainly not in the nude!!!

I guess all these marble maidens embarked from the marble ship.

Peering through one of the garden areas to the bridge.