An early doors shower on board followed by an early disembarkation.  We were heading west along the north coast, and looked for somewhere to get our heads down.  Neither of us had slept well in our cabin … we seemed to be above the engines and felt all the vibrations!  Steady hum, Vibrate and rattle and repeat!  Oh and I shared my bed with two furry and wriggly bodies … you’re not allowed on the furniture in the van, my dears!  Our first identified spot was a car park, but the pukka gypsies (not sure of the distinction, we are van dwellers but not gypsies!) had moved in, so we kept going to Bali.  This Bali had a lot in common with the island Bali … probably, having never been there!.  Beaches, cafes and restaurants.  We rested, walked what there was to see, had coffees and ice creams, a light lunch and stayed that night too.  The only incident was early evening when some ‘idiots’ started throwing glass bottles around ing the car park.  Not at us, but I was out with the dust pan and brush concerned for tyres and paws … if I’d spoken Greek, I’d have kindly given them a bit of what I thought of them and offered them the brush to clear up! 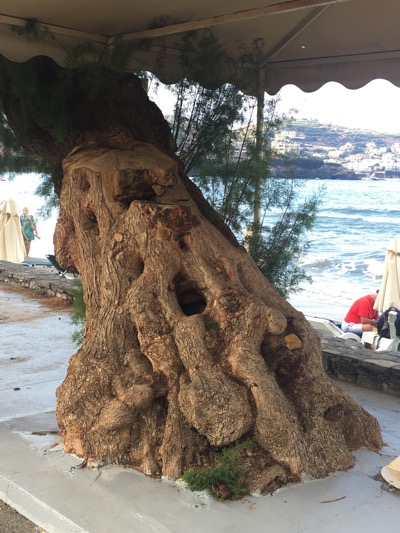 Bali tree, crying out for pots of flowers on its trunk.

With beach shower water to enable a fill up, we cleaned the inside of the van … we aim to do this every Sunday, but somehow life can get in the way.  Then we drove into Almyrida, to check where the Aged P’s apartment was and assess the parking for Jez.  A move just up to the next village, Kalyves, where we spent the night in a large car park.  Another beach resort, with coffee shops etc.  But behind the beach area, there was more of the original town. 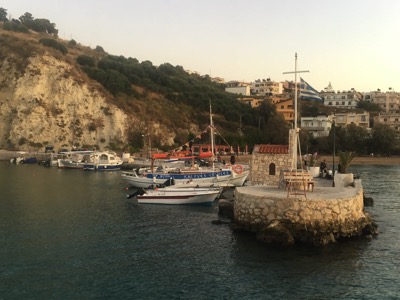 Being opposite a plumbed in public toilet, we set the alarm for 0600 hours for operation ‘Black Waste Empyting”, but a certain person was awake and up at 0400 hours, so the military manoevre was brought forward.  The advance party emptied and the rear cleaned and sprayed air freshener!  Back to bed!

We picked up the hire car and  shopped.  James then took Jez off to our parking and I went to collect the Aged P’s.  They were in a small apartment, just set back from the beach in Almyrida, and we parked along bit in the car parking area.  Early the next morning we were able to move to just outside their apartment … result.  Another result, was that their apartment had two balconies, one with 4 chairs and the other with a clothes horse … we made good use of both.  Oh and an amazing power shower, which also got put to good use, especially as Mum was kind enough (coerced) into dying my hair!

Supper was a restaurant right on the water’s edge watching the sun go down behind the cliffs and leaving a soft glow.

Didn’t fancy eating a meal here … wonder if the chef has an unpleasant habit?

The Aged P’s had visited Chania well over 20 years ago with my sister Clare and hubby Chris, and we’d been for a day wander 18 months ago with Maddy.  All of us remembered liking the town and the revisit, as so often is the case, did not disappoint.  Our only irritation was with the crowds of Americans off a cruise ship that thronged the walk along the harbour front.  On talking to one set, we had had it lucky … the boat’s capacity was 2,500, but only 2,100 were on board … there could have been even more of them, or even worse, 2 ships in!

We coffee on arrival, wandered along the front, accelerated through the busy bit, and up through the back streets, where we had lunch.

Picnic, table and chairs all loaded … we headed west.  Along the coast was pretty uninspiring … miles of ribbon beach hotel and tavernas.  Pleased not be staying here.

First stop was Plantanias where German Tunnels had been dug out by forced local labour to store ammunition.  The tunnels supplied the hillside defensive battlements.  The museum is run by volunteers and is funded by donations.  A film with sub titles explained how the local children used to play in the cool tunnels when it was 40C outside , pinching candles form the church.  The wiring for the lighting had been pinched by the locals and used to tie up fences etc.  The locals felt it was important to remember and tell the story.  It is almost possible to feel blasé about war atrocities when you visit a lot of sites, but Crete suffered hugely during WW2.  And it is obviously still very raw to many of them. 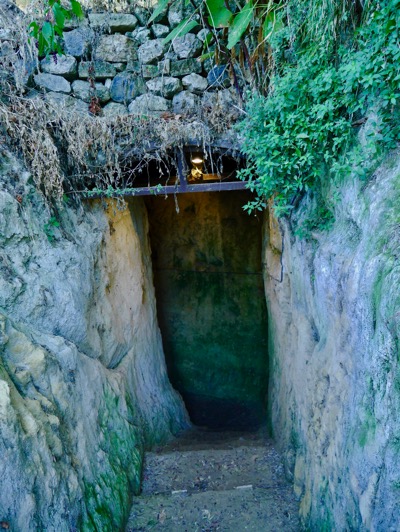 One of the entrances to the tunnels. 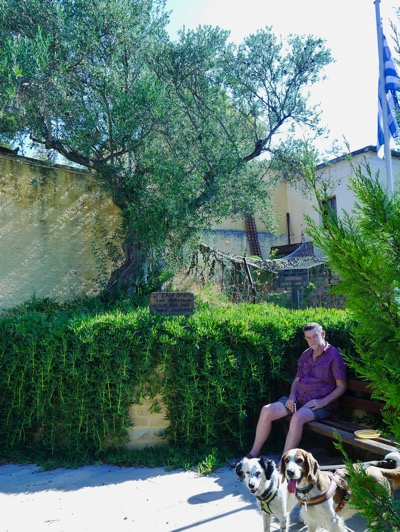 An olive tree outside the main entrance … the story goes that one of the German paratroopers had been nursed by local women, but died and was buried here.  When the Germans wanted to start the tunnelling here, scared of reprisals, the priest persuaded them to dig a little way off.

Stop number 2 was the German war cemetery in Maleme.  The airfield here saw a lot of the initial fighting of the Battle of Crete May 20 1941.  The Allies lost it early on and with lines of communication lost west-east, they pretty much gave up.  Piss poor communication and shockingly poor management at the command levels basically lost Crete to the Germans. Resonance with our politicians today?  And bear in mind the Allies had double the numbers of the attacking Germans and the goodwill and military of the indigenous population.  So many Germans were shot out of the air, that they abandoned their plan of conquering Britain with a similar air invasion.

Hill 107 where 4,500 are remembered here.  Ironically, the cemetery’s care takers were for years the author of “The Cretan Runner” and Manoli Pateraki, who played a leading role in the capture of General Kriepe … for which there were also horrendous German reprisals.

We drove part way up the Rodhopou peninsular, through a few villages and then east at Afrata, down a gorge and onto a small cove.  Not suitable for a motorhome.  Having the use a car does have its benefits. 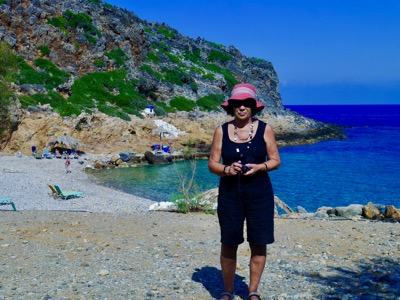 A cafe and a few sun bathers, but a super picnic spot.

On the return journey we had two stops.

The first was St John the Hermitage’s Cave, although I’m pretty sure he had several caves as we’ve come across at least one before!  It was quite a complex and obviously used for ceremonies.

Just outside was a small cemetery, and Google translate was able to tell us that this was for heroes.

The last stop was an ice cream stop!  Although the main reason to come here was this olive tree in Ano Vouves.  This tree is one of the oldest olive trees in existence and is believed to be 3000 or 4000 years old, depending on which source of information you use.  Nice to think it may have been around during the Minoan age.  It’s trunk was seriously gnarled and hollow – it could have concealed several people.  During the last Athenian Olympics 2004, a branch was transported to Athens where victory wreaths were made for the winners of first and last events.

1321:  Not Finding the Rhythm in Rethymno

Having really liked Chania, we were expecting to like Rethymno.  Parked up, had a rip off coffee.  Chatted briefly to a couple who James had chatted to when they admired CO2 in Chania, to be told that the beach football championship was going later that day.  Perhaps, that was what had drown the crowds?  Or was to the over narrow shops, offering all the same silver jewellery or tourist tat?  We’d planned to stop for lunch, decided to see the much made of Rimondi Fountain, and then to skiddadle out of there!  We just tipped over into the second hour on the car park!

Similar to Chania harbour, with its harbour front restaurants and Venetian light house, but MUCH smaller.

Maps.Me – blame the map rather than the navigator!, led us to this Fountain, but it wasnt the right one!  So we’ve not seen the Rimondi Fountain and now won’t, as we won’t be going back!

A lot of graffiti, but this was quite artistic.

This graffiti not artistic.  We were more than happy to oblige.

Dog walking earlier that morning I’d chatted to a Brit, local resident for 10 years.  He was digging a boat out of the sand by the harbour.  A friend was very poorly and he was helping him sell his boat and car and re-home his two large dogs!  Er, no, we really don’t want any more dogs!  But he’d told me about a really good restaurant in a nearby hill village.  And so this was where we went for lunch.  It really was good and more typical of Cretan low prices.  Such good value.

A super drive as the road follows the river bed up to Theriso.  Lots of z bends and great rocks.  Coffee on the way up … unusually dogs were not allowed in the restaurant and the outside tables had all been cleared.  But they let us in the side door and we watched the green patio canopy being pruned right back.  Mum and I wandered over to the adjacent cheese shop … just one choice of cheese, but we got to sample before buying.  Still soapy, not a big fan of Greek cheeses, but at least it had some flavour.  A sheep cheese … so many goats around, but what is their milk they used for?

At the village, the Museum of National Resistance 1941-45 seemed to be shut, but as we walked away, a lady appeared from a neighbouring house with the keys.  At EUR1 each, it was really good value.  Boards in English explained the Battle of Crete and there was hundreds of photos of locals who had fought in the resistance.  The village is also very proud of their connection with Venizelos’, it is the hometown of his mother.  Venizelos fought in the wars of independence against the Turks, was instrumental in self declared incorporation of Crete with Greece, and then became premier of Greece in 1910 (and several times after), thereby assisting official incorporation of Crete with Greece by 1913.

Supper back at the beach front Cosanita restaurant for our last night in Almyrida … Fish Med Veg … salmon on roasted mediterranean veg … yummy. 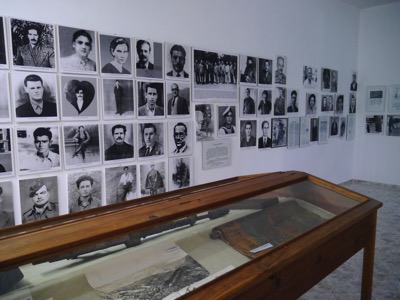 We drove further up the mountain until we found a flattish spot for our picnic … great mountains.