Woohoo.  We’ve done it.  A whole month sober.  Thank you very much to those of you who sponsored us to raise money for Macmillan Nurses.

We celebrated by driving up to the Peza, a wine growing area,  We bounced down a single lane dirt track, wondering how the bottles came out unbroken from the Stilianou winery.  The 4th generation owner told us last night’s rain had caused damage to the road and in a few days he would go out with a digger and repair it … not in time for us, so we bumped back down it.   He is a bio olive oil and wine maker … one of his wines also had no sulphates.  Unfortunately his oil and standard red had been sold out.  Got to taste the oil, which was really good.  He uses a mix of green and black grapes … green for sharpness and red for depth.  As I was driving, James got to finish some of my wine.  We wandered into Peza and saw a large winery with coach loads … this one buys local grapes, whereas the winery we went to you is a small family concern and we were the only customers. Not surprising given the state of the track!  At Peza I spotted the cafe had a good choice of ice cream … so that became lunch!  But then we had massive pastries and coffee before the winery. 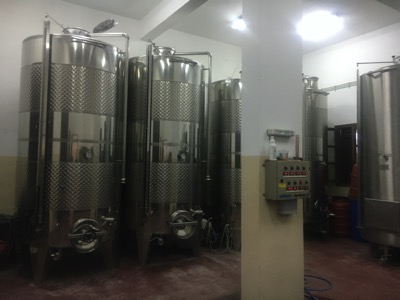 White wine in the stainless steel.

We drove onto Kalyves, where we stayed the night before the Aged P’s arrived.  The champagne didn’t go on ice early enough and since it is Lauren Perrier, we were not going to drink it warm.  So we both had a large gin.  Then celebrated with supper at one of the beach front restaurants. Only a half litre of red … formerly, this would probably have been 1.5 or 2 litres over a meal.  Then we shared the raki and had a small night cap back in the van  I woke at 4 with a cloudy head … hangover?!  James, of course, had no ill effects.

The first restaurant didn’t want our custom … dogs not allowed inside.  We know, but we’ve not had any issues with the covered outdoor spaces in all the months we’ve been in Crete.  Next door were happy for us to eat in their gazebo.  The lady was English, married to a Greek.  I suggested her Greek must be very good, quick as a flash she relied with “He’s not bad most of the time!”  Rather think she’s said that before.  Another table of 3 generations of English were next door on their half term holiday.  As soon as we arrived the heavens opened and the water started a torrent through the floor of the outside space … 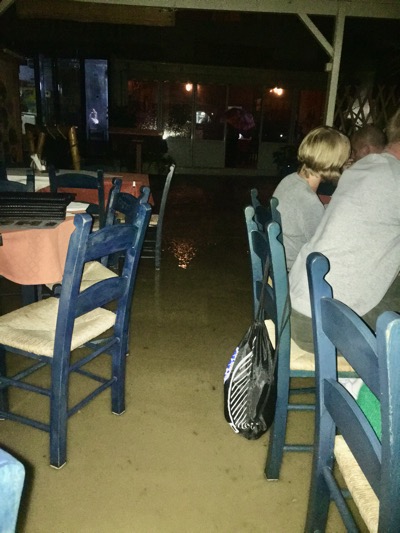 A slight flood through the restaurant. 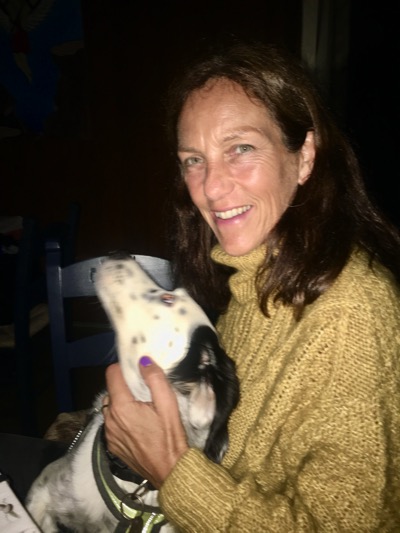 Corrie was very happy to climb on my lap, she doesn’t like going out in the rain even and certainly not sitting in it.  Oscar, was unperturbed by the flowing water.

We watched the rugby final in the van.  I had to keep knitting through it to stop myself from being over stressed!  We didn’t move much!  Dog walking on the beach and I walked into the main part of the town, finding a fish shop, a butcher, vet for dog food and a supermarket.  Cupboards re-stocked.  Caught up on a bit of admin and the blog.  Then, leaving CO2 in the van, we walked the couple of km to the car hire place.  The owner was South African and the rugby result was the first thing he mentioned.  Funny that!  Sadly he feels that racism and corruption are so entrenched in SA, the win won’t make any difference.  We now have the use of a Fiat Panda on a month by month basis. 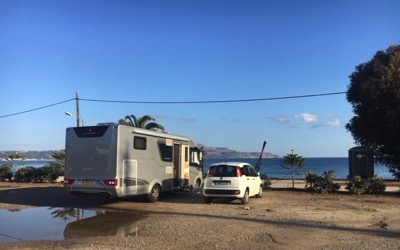 Our water front pitch with our fleet of vehicles!  Suspect the e bikes won’t get used much at the moment.  The public toilet and water point are the tardis looking building on the right … nice and close. 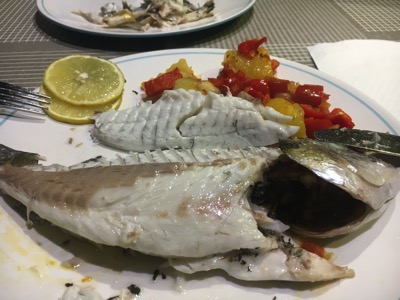 Just showing off a bit … the King of Bream, Gilt Head, cooked under the grill with potatoes, tomatoes and red pepper cooked in the Remoska.  Yummy.

Picnic and table and chairs squished into the boot of the Panda, we set of to Aptera.  A popular spot given the 3 coaches of French tourists.  Being the first Sunday of the month, it was free entry.    Aptera has been inhabited since C14 BC and up to 1964, when the monastery was finally abandoned!  It has an amphitheatre, cisterns, Roman baths, old monastery, and small chapel (shut). 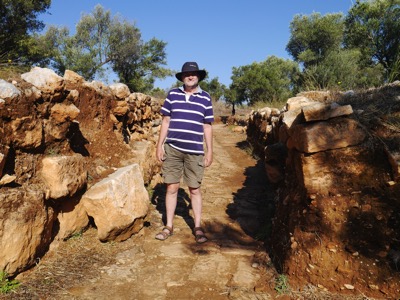 James on the Hellenistic (!) path to the amphitheatre. 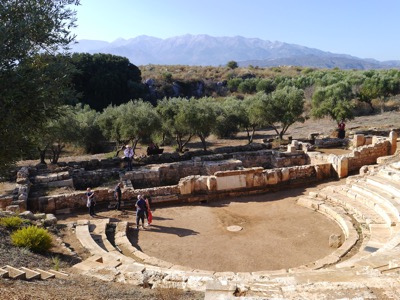 We drove onto the Church in Stylos.  Stylos was significant during the Battle of Crete as the New Zealanders and Australians made a final stand, enabling the Allies to be evacuated.  Many of the Antipodeans were stranded and made their way south … we visited some of the places some of them were evacuated from already, notably Preveli Monastery.  As the locals supported them, there were many villages were destroyed and residents murdered in reprisals.  Stylos was busy with restaurants open and lamb being BBQ’d on great spits.  But too early for lunch and we have our picnic! 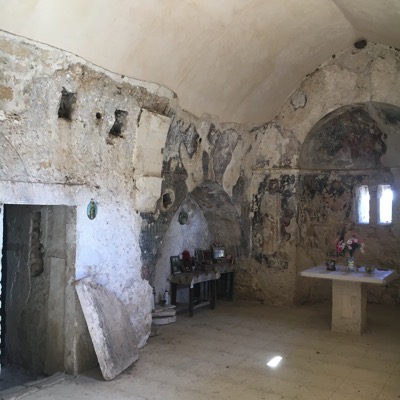 Stylos’ ancient church had some damaged frescoes and excavations inside.

Past Samonas was the Church of Ayios Nikolas; medieval frescos ‘as good as any on Crete’.  We’ll have to just believe the guide book, as the church was shut! 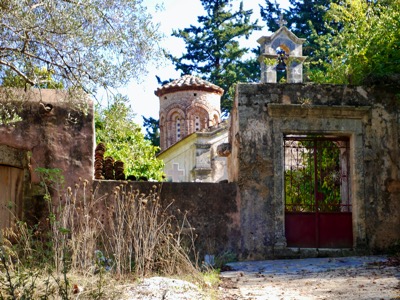 Church of Ayios Nikolas.  We could get through the gate, but not into the church. 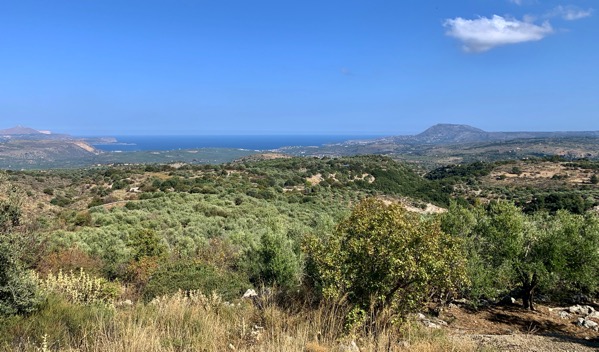 We stopped along the road of our picnic… great views out to the Souda Bay.  Only 7 cars passed us in the whole time.

Kalyves beach area seems to be getting ready to shut up for the winter.  After a coffee from the cafe opposite us, we watched them start to pack away all their tables and chairs.  This end of town might become really quite quiet.  Suits us.

“Well Oscar – what do you think of this place?” “They say we’re in Grease again – in Creti – looks the same to me as Greece and Crete of 2 years ago!”  “By the way, happy birthday – 6-year-old chum!”  “Ok, now the owners are back on the booze again, we’ll have to be careful – mark the level on the gin bottle – and watch James’ heavy pouring hand”  “But Corrie, they say they’re going to drink a lot less…..” Yeah right, Oscar – pigs fly in Crete!”

“Since we arrived (again) in Kalyves, they’ve taken us to Hellenistics, churches, beaches, hilltop picnic areas – they forgot our lunchtime treats once – and put us in a piddly Fiat Pandycar……”

“All right old chum, but they’ve reinstated our sardine and kong rations – even if the old man forgot the feckin kongs last night! “

“let’s give them a chance – They’re good eggs really……”