We are still at Kalyves … such a handy place to park up and use the hire car.  Today’s destination was a walk around Vamos, one of the main local hill towns and an administrative centre.  This was the first walk out of the books local Ann donated to our so very worthy cause.

In the afternoon we managed some laundry in Jez again (and it was all dry by morning – result!) and showers for us.  Supper was intended to be in a recommended restaurant, but it was shut (Monday closures), so we ended up in the grill … any meat you want so long as it is grilled, and served with chips, a bit of salad and tzatziki.  Not having great expectations for our meal, we ordered a half litre of white and two chicken dinners.  OMG … I don’t know what herbs they coated the meat with, and then cooked over coals, but the flavour was just superb.  We ate it all.  We paid … all of EUR14 … but as we were about to leave, we were told to sit down … Greek yogurt with candied lime peel and the Raki arrived!  Wow!

Coffee stop on arrival in the small square … friends of Ann’s had recommended Anna’s bar … we recognised it by the description of Anna’s friendly large black dog, that CO2 were desperate to play with .. but not in the square with the odd passing car. 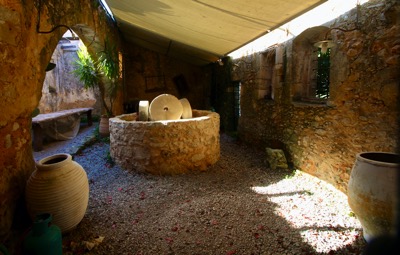 It was a walk of animals … a fair while before we could let CO2 off the leads.  We’ve noticed a lot of young lambs … seems strange to us in November.

Goat tethered under a tree, plus sheep, chickens and, until we got out of Vamos, a LOT of raucous barking dogs. 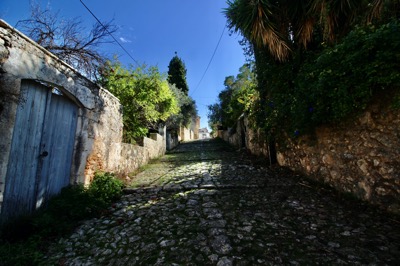 An old cobbled street in Vamos, built during the Ottoman occupation by enforced local labour.

Back to Anna’s bar for a 0% beer … and fresh juice.  James has only not been able to get 0% alcohol beer from one bar, as it was about to close after the season.

After 11 nights in Kalyves … we very rarely stay this long anywhere.  But that was the whole point of having the hire car … park up and explore in the Panda.  And Kalyves was becoming another home from home.   We did the services, and shopping … sea bass for supper.  LPG fill on the way … no need yet for heating, but when we do need it, it does burn gas.

We parked up at a pretty fishing harbour called Agios Onouphrios, on the Akrotiri peninsula (where Chania airport is).

Our overnight parking.  The gaggle of geese were being camera shy!

Another fab view from our front window.  No need to point out in case of ‘vanevac’ (Van Evacuation in case of undesirables) in Greece, we can face the best view. 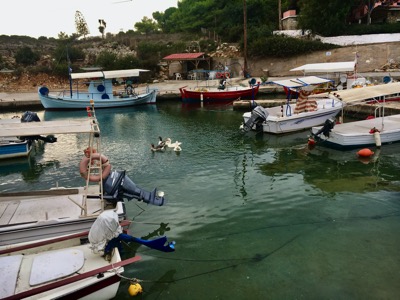 Caught up with the geese. 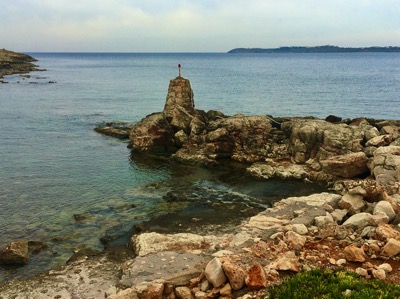 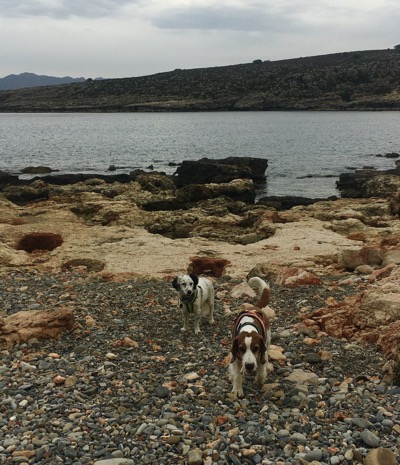 After lunch, we drove in the Panda to the Venizelos Graves and the Souda War Cemetery. 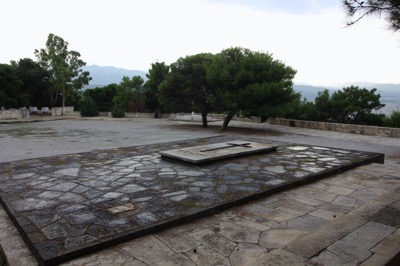 Simple stone slab tombs for Eleftherios Venizelos, Crete’s most famous statesman, and his son Sophocles.  Both were Greek Prime Minister several times and Eleftherios Venizelos is akin to Italy’s Garibaldi .. he unified Crete with Greece.  In Italy no town is complete without a Piazza Garibaldi … here is is Venizelos Square / Street.   The graves are set in gardens …

… with stunning views over Chania. 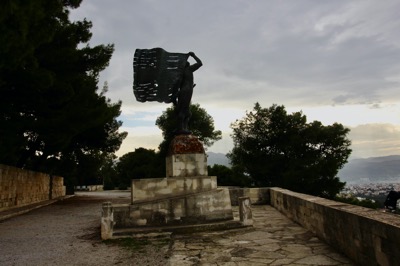 The site was the scene in 1987 of an illegal raising of the Greek flag by rebels, led by Eleftherios Venizelos in defiance of the Turks and other European Powers.  The flag pole was smashed by a volley, but a Cretan became a human flagpole.

The little church of Profitis Elias …

… and its guardian who hissed to prevent CO2 from entering. 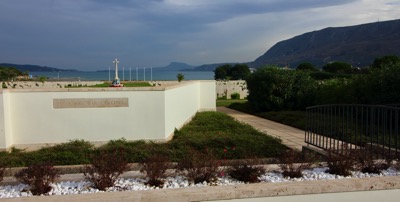 The Allied War Cemetery at Souda.

2000 graves, of which just under 900 were British the rest were New Zealand or Australian …

… a significant number were unnamed …Known Unto God.

In search of coffee, we drove to Kalathas … pretty beach but nothing open, and onto Horafakia, where we found coffee and a bun!  Just to mention, our sea bass with caponata was nostimo … delicious.  Note:  some people refuse to cook fish in a  motorhome … rubbish, no smell at all, so long as its fresh. But do dispose of the bones etc before going to bed!

We woke early hours to a massive thunder and lightening storm.  I got up to batten down the hatches and our little ‘puss was sitting bolt upright, shaking and not looking happy. Up to now, we’ve had her on our laps during thunderstorms, but now we’re in bed.  The choice was for one of us to get up and cuddle her, or we let her on our bed and cuddle here there.  Sheer laziness and we went for the latter option.  Once invited up, she was like the proverbial ferret.  Not to lie between our bodies, but up on the pillows.  We were breathing in her hair through mouths and nostrils, and she has lots of it.  Oscar is not nervous of storms, not to be left out, went between us, but was very restless and moved every 10 mins to shove one part of our anatomy out of his way.  Not our best night’s sleep and NOT to be repeated.

The rain eased and I took CO2 back out along the peninsula, where we watched a tanker connect what looked like a very small bore pipe across the water to the petroleum plant.  No wonder it was there hours.  We did some admin … J more than I … lack of sleep and I was on a go slow.  After lunch we packed up and drove all of 15mins to Stavros.

Massive puddle on one side, so the puddle ducks took a muddy bath.

Corrie avoiding the puddles by leaping from rock to rock.  Oscar ploughs on through. 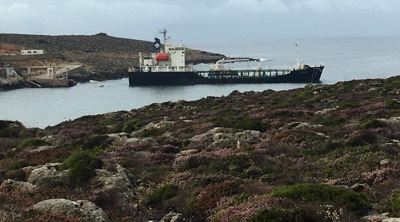 Tanker at work at the mouth of the inlet.  We were able to google where is had come from … the massive petrochemical area just west of Pireaus.

Stavros is a circular bay, almost a lagoon, with the craggy sheer mountain rising opposite which was where the final dance scene of Zorba the Greek was filmed.  And guess what we will watch tonight!  A stunning location and I took advantage of a lull in the rain to walk CO2 between the mountains.

Our overnight with Zorba’s mountain. 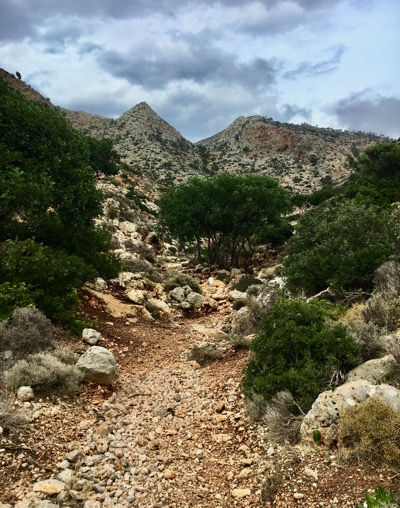 And then the heavens opened a bare 15 mins after I got back.