We did not disembark until nearly 6.00 pm on Friday and getting too late to drive far.  We only drove 20 mins (after a slight detour and poor navigation – K) to get fuel to N of Patras.  Driving through Patras we were reminded about the double, and occasional triple, parking, Service stations where the attendant fills up for you as standard.  Some remembered shop brands.  All feeling warmly comfortable.

I’d had a slow cooker chicken and Remoska braised fennel on the go on board, using that ‘free’ electricity, so we ate with Jenni and David.

Camping on Board – view from our hab door.  The route hugs the Italian, then Albanian coasts, past Corfu, docking at Igoumenitsa, before wending its way between mainland Greece and islands.  Under cover was good, as it did rain in the night.

A stoney beach, but great views across to the Rio Antirrio bridge; this , a ferry and across the Corinth canal are the two connection points for the Peloponnese and the mainland.

On Saturday we had a leisurely start and then went wine sniffing!  I know, most people go wine tasting, but we are on Go Sober for October.

Achaia Clauss winery, we enjoyed the tour even though we’d done it before.  Same tour guide.  The winery is the second oldest business in Greece, A bank, this winery and then a chocolate manufacturer!  Some very old valuable carved barrels.  Originally they were made from Russian wood, now wood comes from France.  Jenni and I were caught by a worker with our heads through the window of the more modern production rooms, inhaling the fumes.  James and I couldn’t sample now but we bought a case of Mavro Daphne, a 15% fortified wine that is good with Christmas pudding (sister Clare recognised it as a recommendation by Jilly Goolden) and for cooking … and of course, drinking … but next month!!

And a baby resident bat.

Jenni and David headed east and we went south to Elea/Elia – so many Greek spellings before you even start on the Greek alphabet.

We had stayed at Elea before and knew of a tap, that is not on the map, so not too busy around there.  We hogged the tap and once I finally got out of bed … (that 10cm memory foam topper is truly comfy!), we got down to jobs.  A blind fix, laundry, a bit of admin and an Oscar prune … he struggles with the heat. 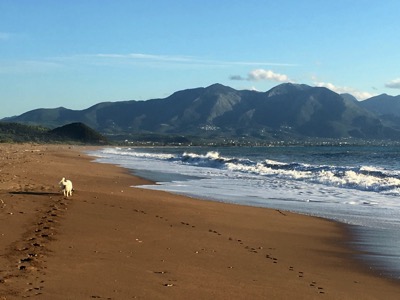 And some dog walks. 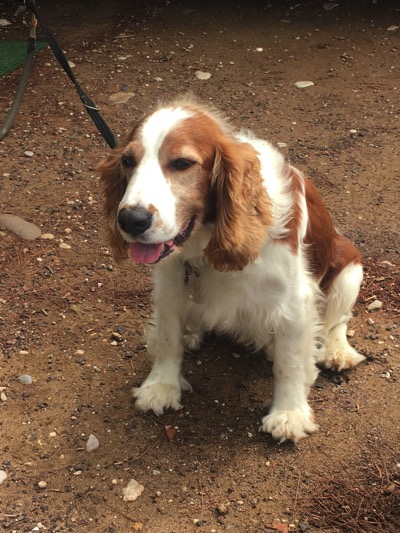 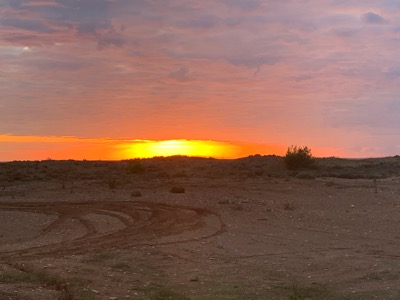 Our peace was disturbed by a trials bike churning up the sand dunes for a little while, but it returned with a lovely sunset. 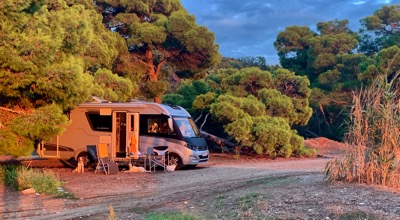 We stayed at another favourite site … Gialova Lagoon.  A stunning location.  Great walk up to the castle and sitting on the beach with my knitting until the rain started. 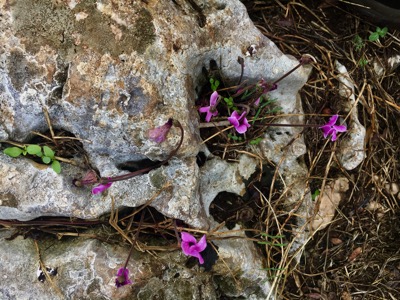 We headed across to Nafplio – another re-visit.  Jenni and David met up with us there and cooked us supper.  The second night we ate out … We’d not planned to stay two nights, but a smart town to wander around, good company and sunshine  … and inertia set in.  And my first sloooow run in months!

A grey day when we arrived, but the sun came out in force on day 2.  This cruise ship behind us kept its engines running till it thankfully buggered off about 10.00 p.m.

The fort island and dredging.

4th attempt by the waiter to take a shot of us without camera shake … we’ve come across this before where younger than us don’t know how to use a camera … as against a phone!  Please note J is on 0% beer and I’m on water!

We headed off to Corinth, leaving Jenni and David with more inertia in Nafplio.  Destination – the vet that did Corrie’s blood tests, neutering and Pet Passport etc when we found her up the hill at Acorinth Feb 2018.  Oscar was due a Kenel Cough vaccination.  Our normal vet was operating – through an open doorway, but waved.  The young vet remembered us and even Corrie’s name!  Vaccination done, general health inspection and a new passport for O, as we’ve run out of vaccination pages … total bill EUR35.  Later that evening, I realised that it seems Corrie had never had a KC and Oscar was due a Lepto and the triple 3 yearly vaccinations.  Quick email to our Farnham vet to have this confirmed.

We headed up to Acorinth, the ancient fortress to over night, which is exactly where we found Corrie.  She seemed to not have any recollection and no-one came banging on our door claiming we’d stolen their dog!  However, we did not expect to find one of her relatives up there all alone.  A tiny pup, with some physical similarities to our Corrie.  Too skinny and wet from the recent downpour.  Other visitors to the site were feeding and making a big fuss of her.  CO2, surprisingly seemed to not be very interested in her …  James kept making puppy dog eyes at  me.  My Mum suggested James go and put his head in a bucket of water!  2 dogs in a van is ENOUGH!  On top of which, a hard Brexit would make getting all the jabs, tests and paperwork done impossible, especially given her young age.  James saw her the next morning, fortunately I didn’t, so I was not put in the position of making the decision to leave her behind.

An ancient site, vet, motorhome repair, lunch and a ferry.  Surely that’s far too much activity for folk that are supposed to be oozing their way around?

So we actually made it inside the the fortress this time. 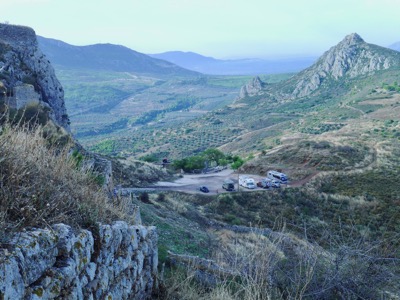 Looking back down to the parking.

After a bit of a climb up part of the fortress (not much standing other than walls, but you really get a sense of the size of the place) and coffee, we headed back down to Corinth to the vet.  Both had their jabs and the vet asked how old Oscar was.  Nearly 6 … “OK we check his prostate”.  So poor lamb had a finger up his bum and when the vet squeezed, I had to watch Oscar’s face for any signs of pain.  Relieved I didn’t have to do this for James’ prostate examinations!  EUR40 for all the injections – so much cheaper than home.   The vet called us ‘nice people’ … I think he really meant soft!  We told him we had been tempted to bring him another stray … he was pleased we hadn’t for our sakes, I think, and said about how many un-homed dogs there are.

Our kitchen tap had sprung a leak along the arm and was still leaking despite the application of glue.  Given how long we plan to be away this trip, we headed off to the motorhome repair place who fitted the rear air suspension early April 2018.  The mechanic found an Adria tap at EUR110, before labour.  We gasped and would have put up with the leak, but he found one at EUR55 plus 20 for labour.  Still more expensive that we’d expected … but ho hum.  It would have been “a lot more money’ had I paid by card and asked for a receipt.  I watched the owner fold the notes into his top pocket.

We dropped down to a beach location just past all the oil refineries and petrochemical smells … lunch right by the beach.  It would have been a great place to sleep, but I rang Anek ferries.  Yes, they could move our crossing forward from tomorrow to tonight.  Yay … we’re off to Crete.

J rested and I dog walked and knitted in the sun until it was time to set off.  A quick stop at the entrance to the port to swap our paper tickets over and then straight onto the ferry.   At reception our cabin was assigned and a pale blue and white stripe waist coated porter took us to our cabin – it was ready despite being 2.5 hours before the ferry was due to leave.  No camping on board in Greece … Lin told me the Greek government likes the revenue of additional cabin sales.

Not pooping on the poop deck … crossed legs for Corrie. 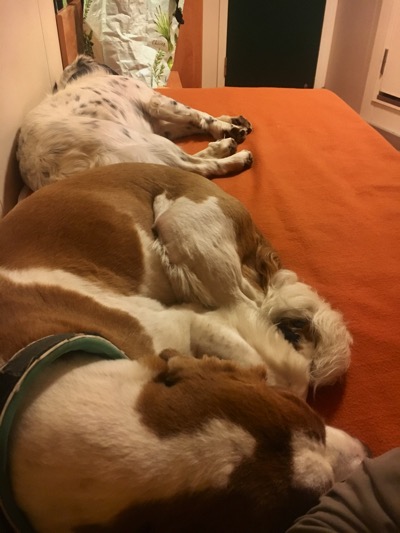 CO2 are NOT allowed on the beds or chairs in Jez … but they hopped up pretty pronto.  Not sure where I was supposed to sleep!  Curled up around them …

The cabin newspaper had 3 pages all about Brexit and a double page spread about BoJo.  would have loved to have been able to read it and see what their take on it is … although given the conversations we’ve had with all nationalities, it is not good.  This is the first time we’ve been away since the referendum where people are asking us what on earth is going on.  As if we have any idea either!