And James back scribing … I’m on pix

The crossing from Heraklion to Piraeus was a bit rocky – I was up at 4:30 to shower!!!  We were due at 6:30 but it was actually 7.30 before we set wheels on Greece mainland after 4+ amazing months on Crete…..  We piloted Jez to Louis Ost monastery and stayed the night – beautiful almond and cherry blossoms in full bloom – slept much better than on the ferry. Strange to be wilding not by the sea…

Our overnight parking at the monastery amongst almond blossom. 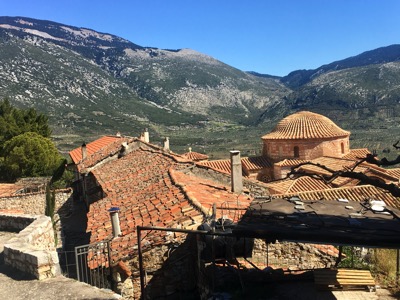 The Osios Loukas Monastery houses now only 5 monks, is set overlooking a valley amongst the almond trees.  And February is when they are all in bloom … lucky us. 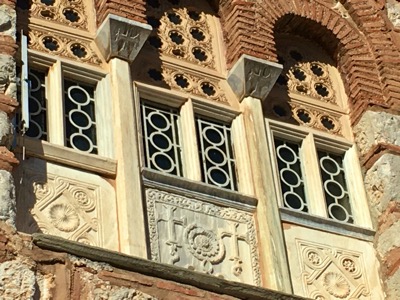 According to the guide book, it was the precursor of that last defiant flourish of Byzantine art that produced the great churches of Mystra (previously visited). 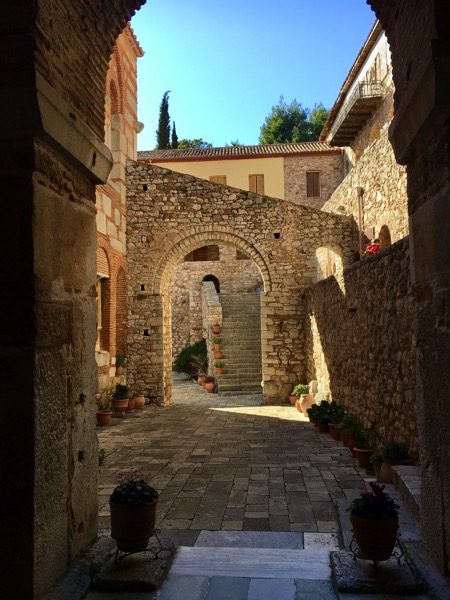 The mosaics were damaged by a 1659 earthquake, but those that are left are considered very fine.  This is Jesus naked reaching for the cross in a swirling mass of water … the illusion heighten by the curvature of the roof.

I have an issue with religion, it’s wealth and pomposity …and these clips were part of a display!

Delfi was the intended destination – but being a national holiday, it was so packed with cars and people, we inched our way through (eventually) – maybe another day.   On to Itea – a pleasant seaside town – a long seafood lunch – nice to have fish for a change. 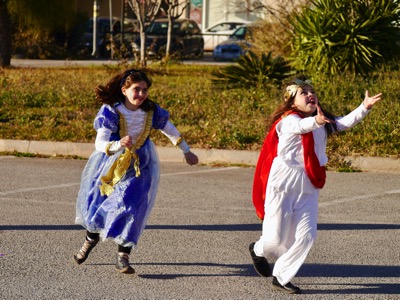 The afternoon procession, despite the Government decree cancelling all major gatherings.  Children were all dressed up … mostly as princesses; aren’t they all?

This was an anti smoking section. 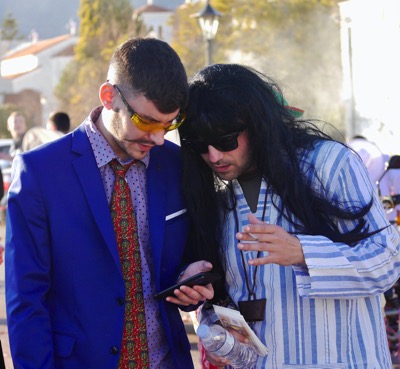 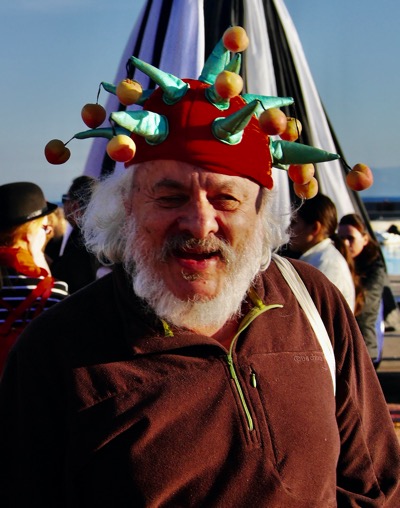 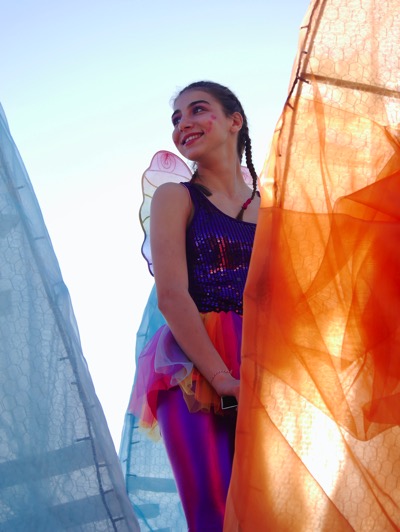 He blew me a kiss!

And he handed me a glass of red … like these kind of festivities!

Don’t think these pirates will do much pirating … their car had to be pushed off and abandoned! 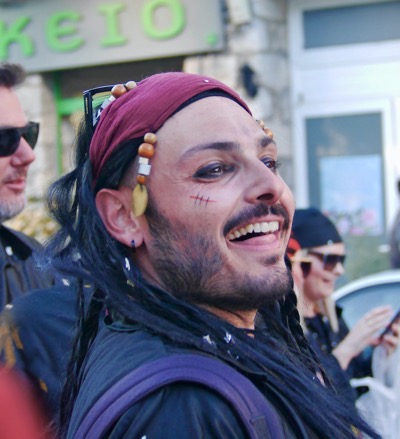 On to another town – Galaxidi – celebrating the start of Lent – we intended to overnight – but like Delfi, cars were queuing to get into town!  Found a parking space perched on a verge – a km from town. K, Oscar and Corry did a recce and phoned me to join them. I had attempted a nap – at a 45 degree angle – not good. In town….. hands up those of our few readers who celebrate Lent by wearing hazmat suits and firing flour bombs at other folk!!!  “Fast food to go!”  K caught a little bomb…..  Because of the crowds, we Jezzed it back to Itea for the overnight – seafood supper again with potato and aubergine salads – “Noshtimo”

We were surrounded by families kite flying in Itea … well, attempting to. Not sure how many children were allowed to tool the kites!  Later in the afternoon, one landed on our roof.

It was rammed … coaches parked on the verge and having dropped off their passengers had a long reverse back up the road.  Fortunately, just as we were leaving, a coach left and we could do a 5 point turn to get out. 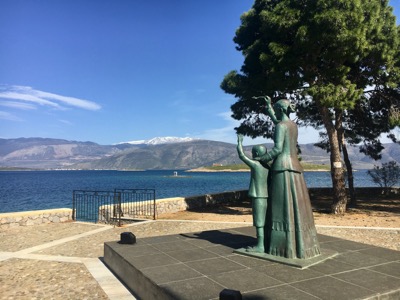 A walk around the bay to the fisherman’s wife and child – recognising their contribution.

Not a bad price … I should have bought the job lot just for the masks! 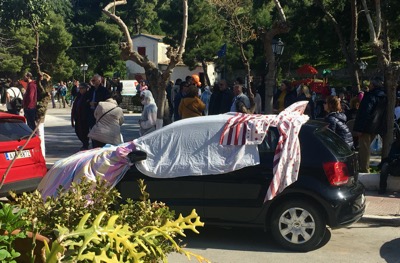 A feeble attempt to protect the car from …

… flour bombs!  The air was thick with it.

Move to Porto Rafti  David and Karen – Grey Gappers – met in Spain at a manzanilla tasting Nov 2016 and kept in touch.  Both heading into TAGA (Turkey, Armenia, Georgia and Azerbaijan.  Wine and meal out … only D got what he asked for!  The rest of us got alternative dishes!  Great to have some good company not too far away in TAGA.

We found a Park4Night free spring water point right in front of a taverna … the owner happily told us to fill our tank with the good water.  And as it was lunchtime, a coffee turned into a lunch omelette … and chips!  No wonder, I’ve been gaining weight.