It rained!  And we packed up (wish I’d taken down the washing line yesterday!) and left our home of 15 nights.  Whilst nothing like as clean and cared for as Turiscamp in Lagos, Lisboa Camping has serviced pitches, the best hot and high pressured showers and helpful staff.  Handy for Ikea and a shopping mecca (if that’s your thing), the airport (and we did several trips there with picking up the hire car, Alison’s visit and my trip home), a bus into town or a short taxi hop around EUR10 with a dog!

Having not done a major shop for 15 days, something to do with a number of good lunches out, our cupboards were bare.  We headed for Palmela, a hill top village with the must-have-as-all-towns-do-castle, a Lidl and LPG.  Leaving the Boys in Jez, I filled a trolley, approached the till and realised how out of practice in shopping I am … I’d left my wallet in Jez.  Quick phone call to J to ask him to bring it to me.  No – not going to happen.  He’d damaged his back wiping Oscar’s paws.  I found him leaning over the kitchen in more pain than I’ve ever seen him (bar the massive dislocation of his shoulder).  Alternate Ibuprofen and Paracetamol and a heat pad administered.  And I did get back to pay for the full trolley load.  Next stop was diesel and LPG.  With having emptied grey and black waste, filled with fresh water … we are in a state of utopia … everything full that should be and everything empty that should be.   Just the slight issue of J’s back pain.

Rather than attempt to park near Palmela town, which looked narrow with no ‘spotter’ to assist with parking, and it was in the clouds so the promised views would not have delivered, we headed towards Setubal (pronounced Stubal!).  I recognised a car park from one of the parking apps we use as we drove past and pulled in.  Really handy for the town.  Whilst J rested, I donned waterproof trousers etc and wandered Setuba with O.  I KNOW the weather makes a BIG difference, but Setubal was pretty uninspiring.  A number of recent attempts by the council to ‘prettify’, and yet a lot of run-down and high rise areas.  In search of something ‘pretty’ I found the colourful fishing harbour, Igreja de Jesus (truly special) and the Bull fight Torre (not even photo worthy) and a couple of parks with odd sculptures and one with an EU funded helipad (!).  About to give up and write off Setubal, I wandered back via the old town.  A number of narrow dirty streets with cafes and men hanging about on corners, but then into the old town proper.  Lovely squares and charming shopping streets.  So in conclusion, worth a half day visit and judging by the size of the small boat fishing fleet and the number of fish restaurants, good for lunch.

J still in a lot of pain, so we opted to stay put in our car park overnight.  We were one of 8 ‘vans.

Run down and high rises.

In the middle of a roundabout … wonder if these damsels have a mermaid effect and cause accidents. 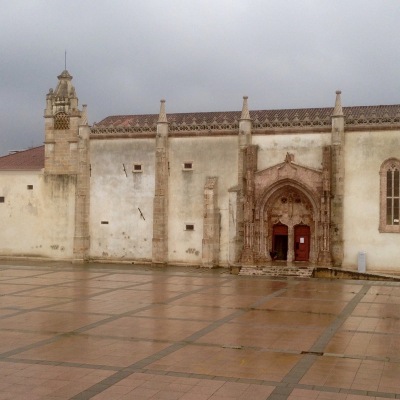 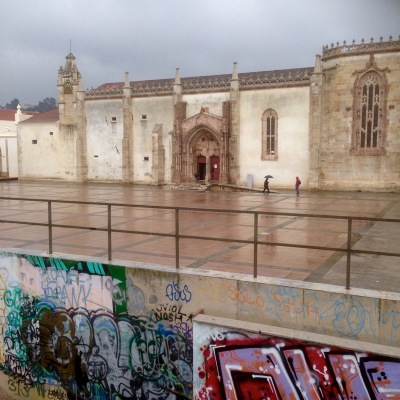 … but surrounded all round by graffiti. 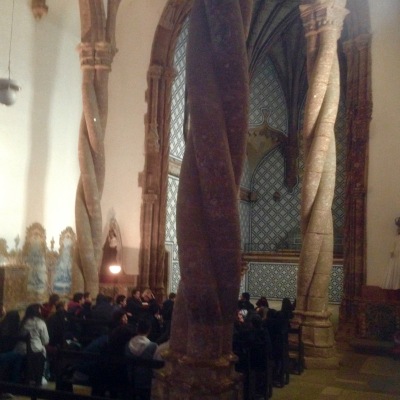 Dodgy pic, as I had to take this from the doorway, whilst trying to keep O just about outside.  But the twisted columns and the tiles really were something. 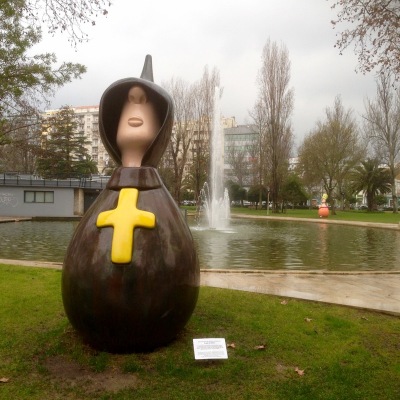 One of the parks … another area had plastic flying dolphins. 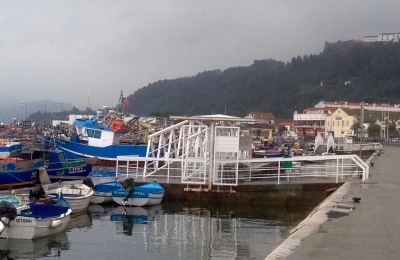 The Spanish star shaped fortress is just visible through the mist.

Oscar and I walked along the front away from the town this morning and the sun was out in force.  Favourable impressions of Setubal improving.  On our return the fishing harbour was ‘bustling’ with men hanging about and chatting … no doubt about where today’s best catch might come from.

We’d booked another Moscatel tour and tasting, but Jose Maria de Fonseca is right in the middle of Vila Nogueira de Azeitao town with no room for Jez.  Having parked a little outside the town, I walked to Fonseca to apologise that two people had become one.  No problem … I had a one-to-one tour with an excellent English speaking young lady.  Not a lot to see compared to the Bachaloa tour we did with Alison, but very good value at only EUR3.

Jose Maria de Fonseca started the winery in 1834 on land he claimed as a debt.  Daddy was in tobacco so funded the start up.  I had not realised that the vines produce some grapes in year 1, but a decent crop in year 2.  In only 3 years did Fonseca not produce wines:  2 years during the Spanish Civil War as Salazar the dictator sent troops and supplies to support Franco and 1 year during the Second World War … despite being neutral, Portugal sent supplies to both sides and wine was not considered a staple! 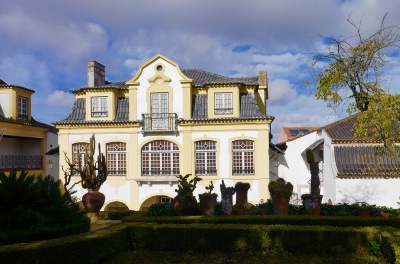 Unusually the 8th generation of family still own the winery, although they no longer carry the Fonseca name.  The family lived in this house until 1970s.  Now most of the family are in Lisbon, but the chief wine maker lives locally.

One of the earlier bottle filling machines … 4 bottles a minute.

Whilst French and American Oak barrels are used (foreground), these beautiful big’uns are made of Brazilian mahogany.  They impart no flavour to the Moscatel.  The Oak barrels are only used for so many years fto flavour the red wine and then moved to storing Moscatel.

A Fonseca chandelier hanging in one of the cellars …

… casting the Fonseca emblem on the floor.

My two glass tasting … the Periquita red was the first Portuguese table wine to be bottled.

Being so close to the restaurant which we ate at with Alison  (recommended by Bachaloa), it seemed silly not to stop by … so we did.  Again we started with the local DOP Azietao cheese, followed by codfish, potato and cream bake and chicken baked in orange … again yummy.

We passed Sesimba on the way to our overnight destination, so again I left J resting whilst O and went to discover, and I quote: “the old town is a maze of steep narrow streets with the Santiago Fort (now a customs post) in the centre overlooking the sea”.  Well, at least O got a run on the beach!  Very ordinary … perhaps it comes alive in summer when the Lesbians (darned predictive Applespeak) – Lisboans – flock here.  Perhaps I should change guide books and predictive!? 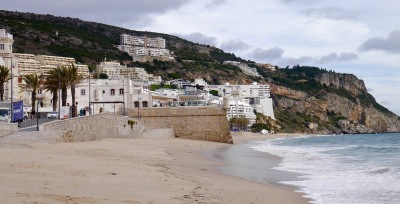 Sesimba:  the fort is the bit jutting out and break the beach into two.

Our overnight destination is another peninsula: Cabo Espichel.  Sheer cliffs dropping into the sea on a windy and bleak outcrop. A good few miles from anywhere and Pilgrims flocked here from C13 after a local ’saw’ the Madonna coming our of the sea astride a mule … no mention of her clothing ore perhaps she covered her modesty with her hair (Lady Godiva perhaps)!   Between 1701-1707 the impressive Santuario de Nossa Senhora do Cabo was built and Pilgrims were accommodated in the rooms either side that you see below.

Back home each of these arches would now contain a craft shop or cafe.  Here some roofs were falling in and all windows bricked up. Actually I prefer this natural state. 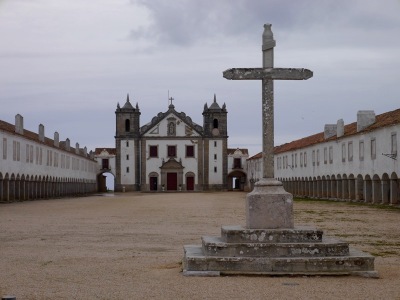 No photos inside, but it had stunningly worked statues in each alcove and the ceiling was painted in 1740 by Lorenzo da Cunha, considered one of the best fresco painters in his time … this ceiling is the only of his work to have survived the 1755 earthquake.

This is all that remains of the Opera House, where the Pilgrims were entertained, often by travelling Italian troupes.

View across the the lighthouse, where O and I walked, avoiding two lads on quad bikes. 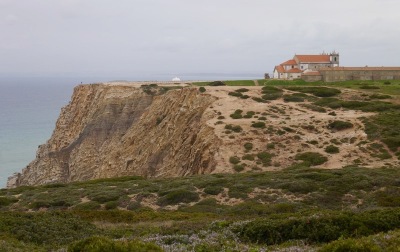 Looking back to the monastery … you may make out a tiny black dot on the top of the cliff.  Some muppet has ignored common sense, all the signs about the strong wind and risk of falling and crossed the barrier to stand right on the edge! 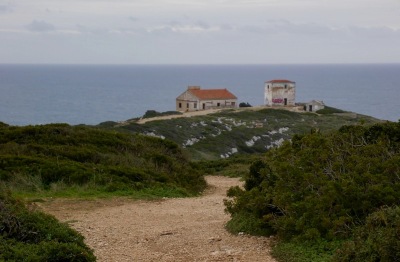 Just below the lighthouse … a derelict military installation complete with concrete gun installations … not sure why or when.

Jez is in the centre of the pic and tonight we are blissfully alone with just the wind (not just Oscar’s snoring) for company.