We coffee’d with Brian and kept in touch with Maddy … she had 1hr and 10 mins from when her plane was due to land at Athens to catch her flight to Chania; bear in mind the gate shut 30 mins before the flight departure.  And her incoming fight was a bit late.  But she made it!  Lots of benefits of hand luggage only and a small airport.

We drove in convoy to Kissamos and parked along the beach.  Maddy and I had a short beach walk with CO2 and then she and J napped … she had been awake since 3.30 am!  Supper in a family beach side restaurant … yummy pork with celery and greens.

Kissamos Bay is 3 sides of a square. 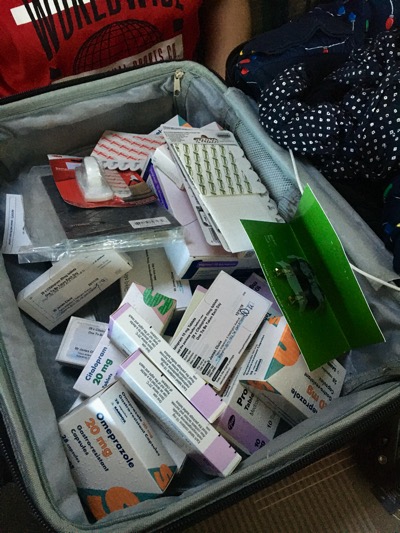 … so she worked her way through my tops and jumpers.

But she did bring us matching festive pyjamas … 🙂

And for the third (out of four) Christmases that we’ve been away, she and I put up the decorations. 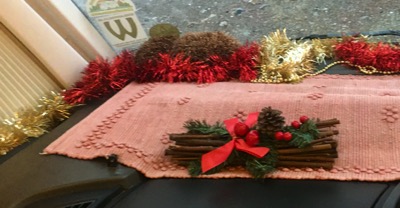 We bought coffees from the shack next door to us … Greek coffee or Nescafe?  And headed off in the AndyPandyCar into the hills to Polyrrhina.  The road stops and you walk up through the ‘new’ village to the site of the old.  Great views, but Lin (who is my All Things Crete Guru) told me had we gone all the way to the top, we would have seen both N and S coasts.  However, my fellows were not keen (point blank refusal on the part of one!) to climb further.
Back at Jez, Maddy worked on a Uni assignment … her approach started with a message to one of the other students … what are we supposed to cover????  Why investigate yourself, if you can get someone to tell you!?
A wander around the centre of Kissamos and supper on the main square.

Cave dwellings from the Roman era in the newer village. 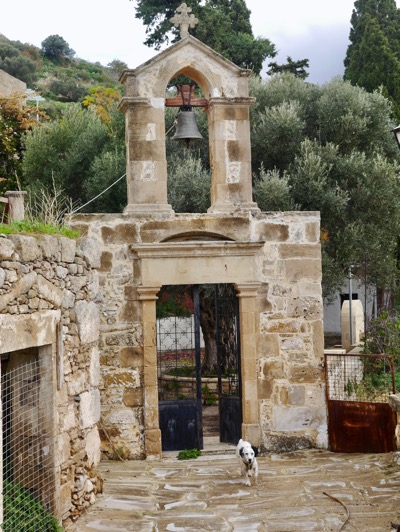 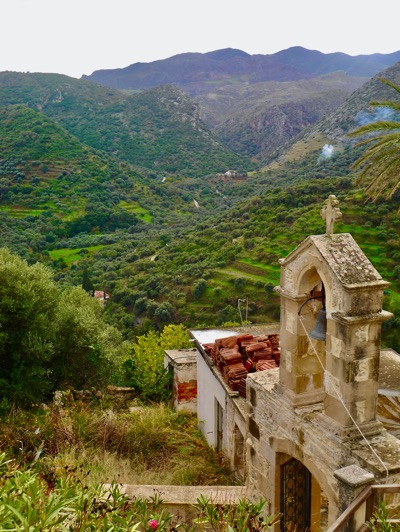 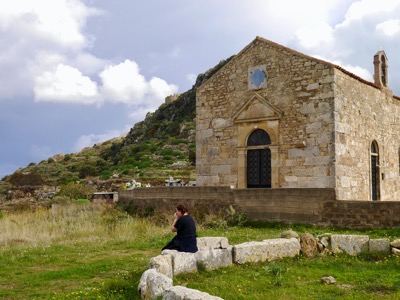 You can just make out the walls of the fortress to the left of the church .. such a long way (!!!) so this is where we stopped.

Coffee and pastry in town and then we set off for Falassarna Beach, billed as one of the most impressive beaches in Crete.  Lunch and then Maddy and J nanny napped whilst I took the AndyPandyCar up to Balos with CO2.
An 8km each way, mostly 1st gear drive up to the Balos Beach carpark.  Most of it was firm, but the recent rains had brought down some scree and there were divots from the water run offs, so a little hairy in places.  But worth every slow full concentration kilometre.  I was very conscious that the last long dirt track we’d driven in the car had resulted in a shredded tyre and I didn’t have James with me to do the change over!  The views down to the beaches were just stunning … and the rain held off!
By late afternoon, the winds started and we sure felt them as we were right in the middle of a large flat car park!  We moved after supper to shelter behind one of the restaurants.

Looking down to Falassarna Beach. 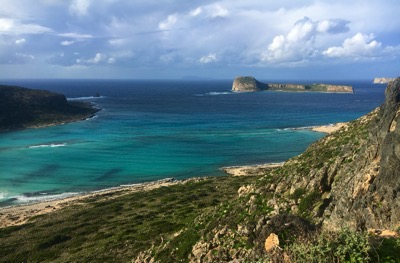 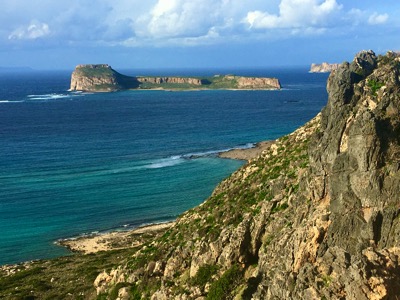 1380: Sideways Hail and Sand and Kalyves

A very slow start … one member of our party … and it wasn’t James or I, had stayed up till 0330hrs tracking the election results.  Before we set off I took CO2 for a longer beach walk.  Coming back, the wind got really up and then the hail started.  The wind driving the hail and sand into Oscar and I.  He started off red and white and became a lighter ginger all over from the sand, as he plodded stoically by my side.  Corrie, meanwhile, had bolted back to the van.  I must teach her how to knock at the door … she was still sat patiently waiting for admittance when we finally caught up with her.  Thank goodness for doggy dry bags … the sand fell off the dogs into these as against the floor.  And kept them warm as they dried.  If in doubt about the efficiency of these bags, their heads were still sodden when released 30 minutes later, but their bodies dry.
Back at Kalyves, Maddy completed her assignment and ate at Eleanore’s in Drapanos with Brian … this has to be our favourite place near here.  Yummy starters followed by chicken in raki and feta .. delicious and far too large portions, so doggy bags for all (but no sand in these bags and certainly not to be fed to CO2!).  We watched the Strictly final … my fav was crowned champion.

Coffee and then I ran Maddy to Chania airport.  I was in trouble as she could have caught later flight, which would have reduced her wait at Athens from 5 to 3 hours … but I’d not checked that any airline other than Agean did this route!  And now her flight is running late … she must be loosing the will to live!

Back at Kalyves, Brian kindly treated us to lunch at Icarus restaurant.  Full bellies again!  And and easy evening.