With a gap before we have to be back at Fiat for another repair (minor this time, just a replacement cigarette lighter) we headed back down to the South coast.  A nice little spot on PJ’s Greece Stopovers, adjacent to a small Taverna and hotel and a small harbour.  We stayed 3 nights and other than 2 Korean girls who stayed one night in the accommodation and a couple of fishermen, we were undisturbed.  Just lovely.  Perfect wilding.  Oh, there was this British man, who joined us for 2 nights … we’d met Brian and his Vizsla, Zoa, on the campsite near Rethymno.  J and I had lovely drive in convey over the white mountains down to east of Choria Sfakion.

Once we’d lunched and J rested we drove the AndyPandyCar into C Sfakion.  We’d visited this with the Aged P’s third week of October and it was VERY different now.  Completely closed up for the winter, bar one cafe and the bakery, which was in full production, bagging up biscuits and rusks.  I bought some biscuits and we had a lovely chat with the daughter and were given chocolate as it was her mother’s Name Day … more important than a birthday in Greece.  Coffee and then back to Jez for supper with Brian.  And he plays Cribb.  This might have been my third question to him.  One for his Nob!!!

A shut up Chora Sfakion.

I’d fancied doing the Imbros Gorge for a while, and it lived up to the hype.  It is considered the little sister to the Samaria Gorge, but has some great scenery and is only 7.5km.  We left the AndyPandyCar at the bottom and drove Jez to the top and walked down.  The plan was to drive the car back up to fetch the van and to avoid the EUR25 taxi fare.  Great walk and got to the bottom … fatal flaw in the plan.  We’d managed to leave the car key in the van!  So had to stump up the taxi fare after all!

We consoled ourselves for the waste of money with a coffee and cake (thank you Brian) back in C. Sfakia.

Start of the walk … and tarmac.  The rest was unstable stones, so slow going for us.

Brian and Zoa, with J and C.

We encountered one group of youngsters and a runner who went down and up … in the summer it is heaving. 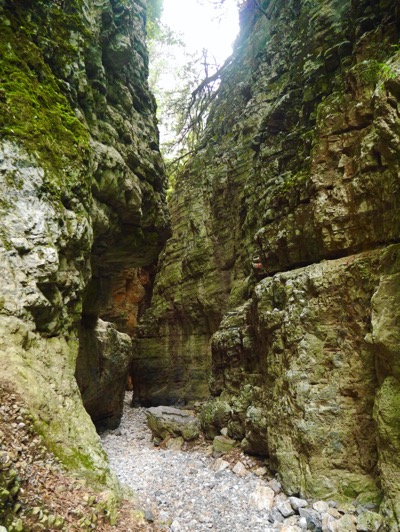 Apparently not as deep as Samaria, but still narrow in places.  1.6m at the narrowest. 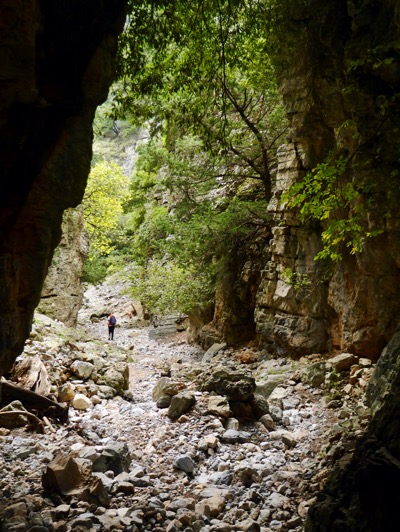 Brian and Zoa were much faster than us.

The dogs have all become besties and Corrie deserted us for her new friend  …. Brian cobbled her to the other end of the lead to await our descent.

Pretty much flat with surrounding views of the White Mountains.  And the sun stayed with us until the last 20 mins when the rain came down.  We drove into the small village of Amoudari, where we found an open taverna.  It soon filled up with locals … the Greeks do make a point of Sunday dinning with friends.

Taverna with real fire for us to steam dry to.

Rabbit in wine sauce for me and chicken for J … all with chips of course!  I’ve eaten more chips this trip than in the previous 4 years!  But they are generally hand cut and actually taste of potato.

The lunch must’ve given me loads of energy as I washed the outside of the van whilst J had his nanny nap!  Only for it to rain and leave loads of dust streaks all over it two days later!

1375: Back to Heraklion and a Lost Corrie

3.5 hrs drive plus a coffee stop, of course, back to Heralkion … just east to a beach parking we used a couple of times last trip.  Lunch on arrival and then I braved the supermarket to stock up a bit prior to Maddy’s arrival on Wednesday.

I take CO2 for their last night time walk and it was raining.  Whilst I dried Oscar’s paws, Corrie just disappeared.  I whistled and called, scanning the black rain for sight of the flashing bauble on her collar.  No sign.  A car drove in, paused and then left.  I was convinced, she’d been stolen.  J had to get up and dressed … he went one way down the beach and I the other.  He found her about 400m further on … she’d just kept going and not turned left at the van.  What a relief. Since then, we’ve tried 3 pet shops to buy the full lit up more visible collars … but they don’t seem to sell them here.

We left Jez with Fiat for the cigarette lighter fix, had a coffee and dropped by the Truma agent to collect and pay for the right angle part for our gas.  The chap is so busy fixing olive tree shakers (a vicious looking long device that shakes the branches so the olives fall off) that we will go back to him sometime in the New Year.

Fiat thought we have mice in the engine bay … no droppings or chewed wires but some disturbed dust marks … I put some mouse glue on cardboard and baited it with cheese … no stuck on rodents thankfully the next morning.  And it really is glue … dead sticky.  I should know as I got some on my fingers.

Thence back to Kalyves … Lovely Ann gave us the regulator posted from Britain, so now we finally have a spare.   Brian had arrived on Sunday.  We had the decider match of Cribb … what a slaughter!  I was particularly lucky with my cards, for once.